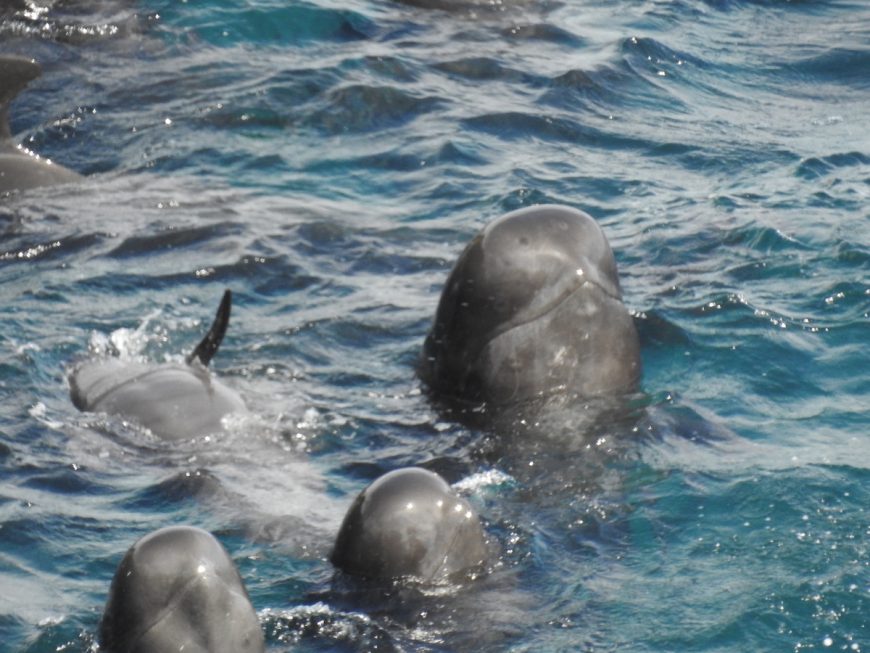 Under the surface of the ocean, a black, robust torpedo-shaped figure glides by. She is not alone; there are others. She is never alone.

She is a short-finned pilot whale. She swims with her family pod, was born into this pod and will never leave it. Her grandmother is the matriarch, who guides the family pod, and is – their pilot. Leading them to rich feeding areas, passing down pilot whale culture and language, each member of the pod is devoted to the matriarch, and to each other. Pilot whales are one of the most social dolphin species, exhibiting extremely tight family bonds. This can be observed in a mass stranding where an entire pod of pilot whales will strand together, rather than leave a family member alone. These bonds are also demonstrated at the Cove, in Taiji, Japan, where family members fight for each other and will never leave each other’s sides, even in their darkest hours.

Black in color, she wears her heart on her chest – literally – boasting a distinctive light colored, heart-shaped patch. Individuals can be identified by their dorsal fins as each pilot whale’s fin varies in size and shape (with males possessing a larger, more hooked dorsal than females). Her large, bulbous head also distinguishes her as a pilot whale. There is no elongated “beak”, characteristic of many dolphin species including the more commonly known bottlenose dolphin. And that face…there is something very special about the face of a pilot whale.

Her lifespan is expected to be about 60 years while males can live about 45 years. She is typically able to produce calves every three to five years once becoming sexually mature. Calves will leave the family pod to breed (around age 12), but will rejoin the pod. She will stop reproducing at around 35 years old but can produce milk into her early 50’s. Older female pilot whales have been known to nurse calves that are not their own. Humans, orcas and pilot whales are the only three mammal species where females live long past menopause. 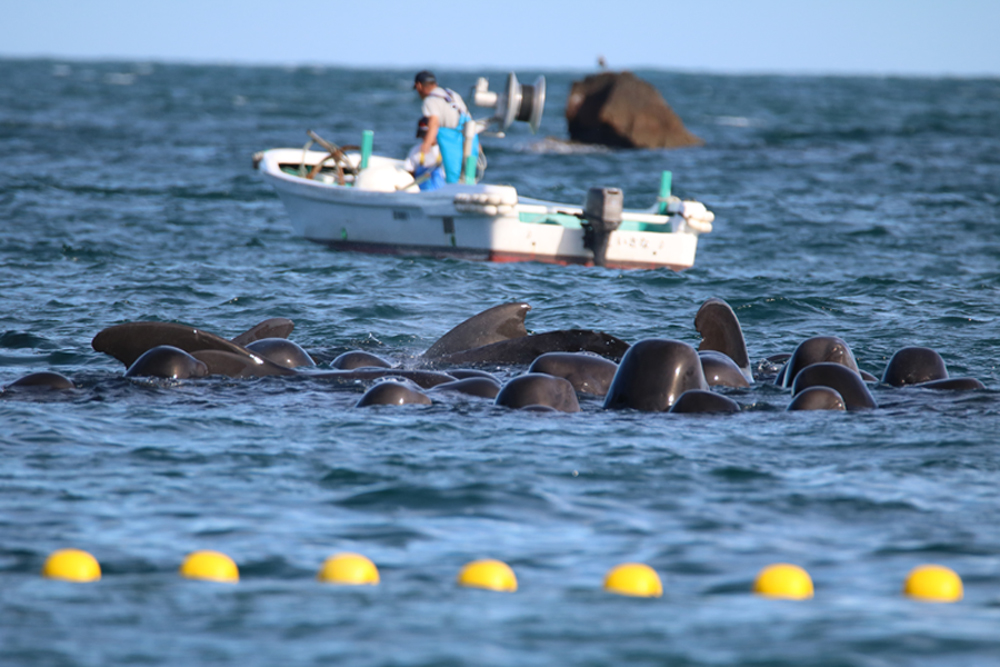 Although she is called a pilot whale, she is a dolphin. In fact, all dolphins are whales but not all whales are dolphins. Whales belong to the order cetacea, of which there are two suborders: mysticeti or baleen whales which are the “great whales” and have baleen plates to filter their food and the odontoceti or toothed whales which have teeth. Pilot whales have 40-48 teeth which are used to grasp prey but not chew it. Squid is her favorite food although she will also eat other cephalopods such as octopus and cuttlefish and also a variety of small fish. She is well adapted to dive deep, her bulbous head containing a large amount of spermaceti, a waxy substance also found in another deep diving species, the sperm whale. Most of her hunting is done at night.

And on this particular day, with her pod resting on the current, their stomachs full, her life and that of her family would be forever changed. 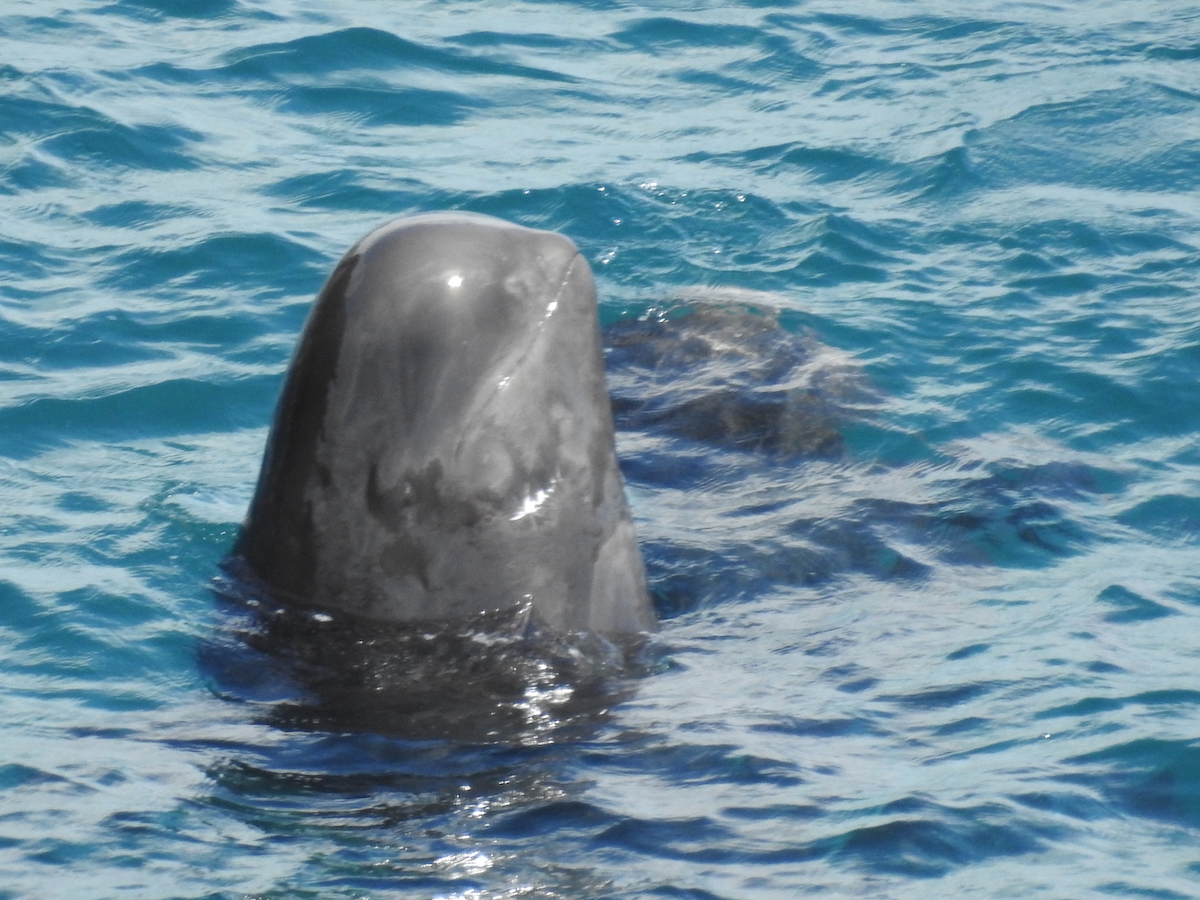 Pilot whale spyhops after being driven into the cove, Taiji, Japan. Credit: DolphinProject.com

Resting, or “loafing” family pods are easily approached by boats. However, the boats that came near her family pod this day were not coming in for a closer look: their reasons were much, more sinister. Awakened by loud, banging sounds, the matriarch signaled they should move away from the noise. Being extremely acoustically-sensitive, the sounds were painful, yet with every attempted move away from the sound, the noise just followed them. Female calves moved towards the middle of the pod while the males defended the group from the perimeter.

After hours of aggressive pursuit, the boats with their loud engines succeeded in pushing the family pod into the cove. Being a species that spends most of their time offshore, the pilots were confused. A net was dropped behind them, presenting a barrier from preventing the pod from returning to the open ocean. Echolocation didn’t provide necessary information as to what was on the other side. Then suddenly, the sounds stopped, and they were left alone for the rest of the day.

The family pod remained trapped in the cove through the night. Dolphins began spyhopping in frustration and fear; many were tail slapping and jumping up and down. Others became hungry and thirsty, as water is obtained from the tissues of the food they consume. The matriarch tried to provide comfort, turning upside down and swimming on her back amongst them. They communicated with each other using clicks and whistles but no one had any answers. No one had any idea of the terror that would be unleashed on them in a few, short hours. 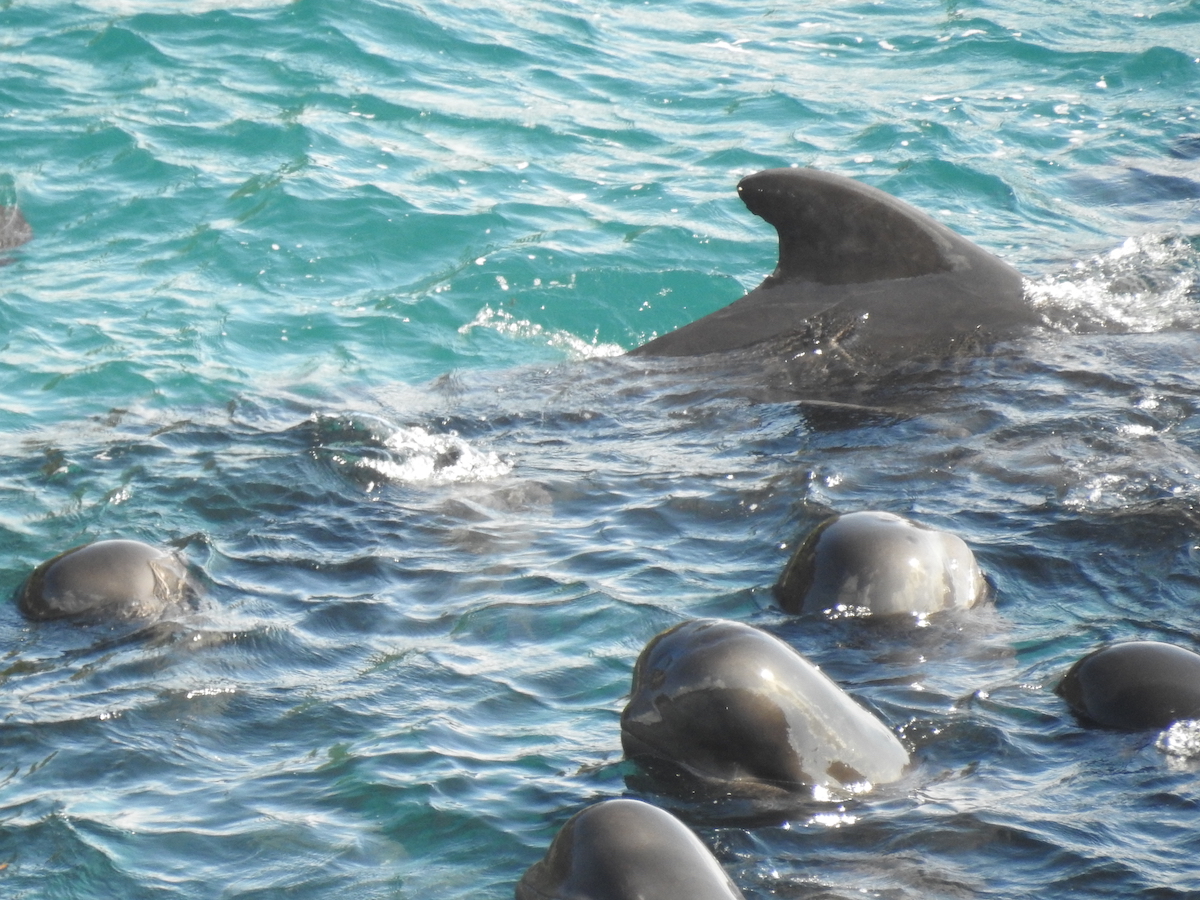 As the sun began to rise, strange sounds filled the cove. She became restless, as did others, and calves were drawn close to their mothers’ sides. The entire pod huddled close together as skiffs now began their approach. Without warning, the boats were turned around, and with their engines facing the pod, came directly at them. Utter chaos erupted. The pod desperately tried to escape but with nowhere to go, they were pushed close to shore. Another net was dropped behind them, humans were now in the water and still, the boats kept coming. The large males – uncles, cousins, brothers – were dragged by their flukes onto the beach. She crowded close to them but was pushed back. And then the unimaginable happened.

A metal rod was driven through the backs of the males, right below their blowholes. She watched in horror as her pod mates thrashed violently in the water. Then their blood began to flow. A female was manhandled into a sling and taken away. Others suffered a similar fate as the males. Consumed with the suffering of her family, she didn’t notice the human coming towards her, nor the rope that was tied around her flukes. Suddenly she felt a pulling sensation as her body was dragged towards the killing beach. Tethered to a stake, she watched, panicked, as the humans made their way down the line of tethered pilot whales, killing each and every one in front of her eyes. She watched as they approached her, seeing only their shadows as they raised their arms and…

…then she was no more. 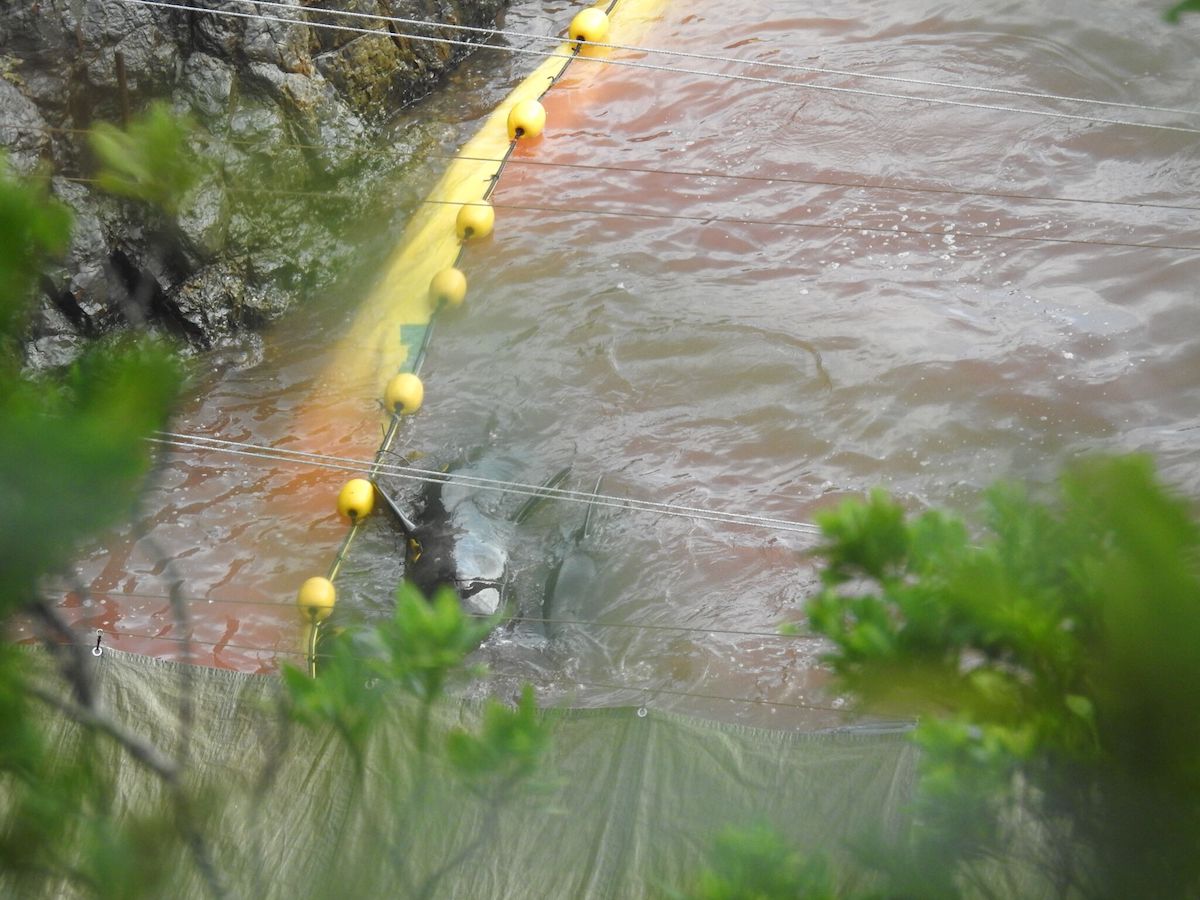 Suffering pilot whales after being driven into the cove, Taiji, Japan. Credit: DolphinProject.com

The remaining pod members gathered as close as they could to where they had last seen their family. Calves called out for mothers who had either been killed or taken captive. Again they were left alone. Hours passed and as the pod grew weaker, the humans returned. Using the same boats to drive the pod in, the pod was now forced away from the beach and out of the cove. Family members and elders were cut by propellers, and calves were confused as to where they should swim. Over and over, the dolphins attempted to get back to the beach, but were intercepted and forced to move away.

Without the leadership of the matriarch, this remaining pod of pilot whales finally sped out into the open ocean. And while the pod might have looked the same, in all their majesty and grace, the hearts so proudly displayed on their chest would be forever broken.

The population of short-finned pilot whales is listed as “data deficient” by the International Union for Conservation of Nature. In addition to being hunted, another serious problem for pilot whales is getting caught in fishing nets and ending up as by-catch. Ocean noise and seismic testing are also believed to cause their mass strandings. Short finned pilot whales are listed in Appendix II of CITES, which includes species not necessarily threatened with extinction, but in which trade must be controlled in order to avoid utilization incompatible with their survival.