On the Beach in Taiji Sept 1

Home/Blog/Japan/On the Beach in Taiji Sept 1 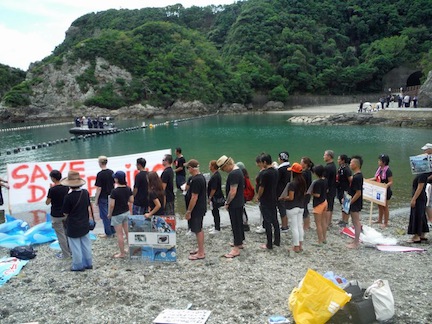 After spending several days in Tokyo and a magical, wonderful, life-changing experience swimming with dolphins in the wild at Mikura Island near Tokyo, today the 2013/2014 dolphin hunting season began.  It has been a sad, surreal day.

I went out with a large group of fellow Cove Monitors this morning, grateful for a night of heavy thunder and rain and hoping that the banger boats would not head out to hunt.  But when we arrived at the harbor a little after 5AM, all twelve boats were just leaving.

I was happy to see two friends from last year – Heber and Elloy – and a bus full of more than twenty of their Brazilian activist friends, living in Japan.  I was overwhelmed by the ripple effect, the impact that just one person can have.  Heber and Elloy were our bus drivers last year, and this year they rallied their own peaceful troops to stand for the dolphins’ lives and freedom.  I was so touched by the impact that human beings can have if we just step up and begin to take some responsibility for our world.  This world needs us, now more than ever, and change CAN happen, even if it seems to happen slowly, and we ARE making a difference.  We are.

We watched in horror and disbelief as the hunters drove in a pod of approximately 30 to 40 dolphins.  I still couldn’t believe this was happening on the very first day of the season, with so many activists and media in Taiji.  Last year the first pod wasn’t driven in until September 7th.

And my heart was even heavier, having just experienced the opposite of Taiji while swimming with wild dolphins at Mikura Island, where the dolphins are honored and protected, and where our dive instructor Taguchi San showed us footage of the Mikura dolphins playing catch with seaweed and caring for their babies.  Spending time with the Mikura dolphins only deepened my love, respect and awe for these creatures, and it was absolutely heartbreaking to watch them now being violently driven into the cove and trapped to await an unknown and horrible future.

Skiffs set the nets around a pod of bottlenose dolphins in the Cove.  Photo by Vickie Collins.

Once the pod was netted into the cove, we ran from our lookout at Mount Takababe and arrived at the cove.  It was an overwhelming sight – there were Japanese nationalists yelling over loud speakers across the cove at the large group of Japanese activists, Brazilian activists and activists from Ric O’Barry’s Dolphin Project.   The police and press were scattered all over as well – it was chaotic and emotional and soul-stirring.  These people have come from all over the world to stand together to protect these dolphins, and it was especially moving to see so many people from Japan raising their voices against this atrocity that is going on in their country.  It was the best of who we are as human beings, and on such an emotionally and physically fatiguing day, it gave me hope.

Tonight my heart is with the family of dolphins trapped in the cove.  We will be with them in the morning.

Activists from around the world have a moment of silence for the dolphins on the beach at the Cove in Taiji.  The zodiac boat on the left in the background is the Japan Coast Guard.  Police are visible in the background at right.  Photo by Vickie Collins.

Ric O’Barry and rock star Matt Sorum pose with our Japanese activists on the beach in Taiji.  Photo by Vickie Collins.

Tune in to our Ric O’Barry Dolphin Project Ustream Channel for video updates, including live reports from the beach in Taiji by Lincoln O’Barry.

Ric wades in on Sept. 1st in the Cove with activist Satoshi Komiyama.  Photo by Vickie Collins.