Observations and Impressions of a New Cove Monitor

Home/Blog/Japan/Observations and Impressions of a New Cove Monitor 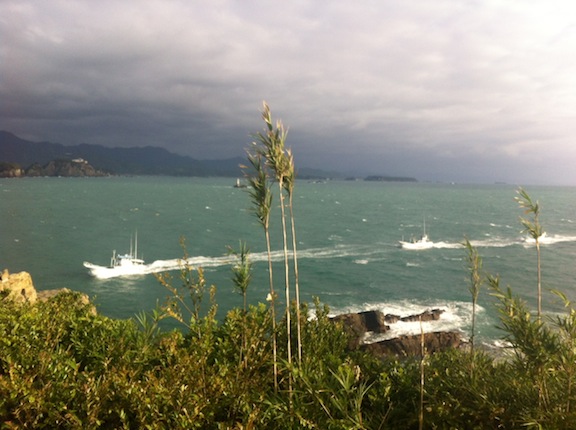 In 2010 the horrible slaughter-part of the documentary The Cove went viral on Facebook in Switzerland.  Watching that massacre on screen, I knew I would have to get active and one day come to the shore of Taiji, Japan, to be a Cove Monitor to document and show my support against this atrocity.

That day came on Thursday, September 25, 2013 when I stepped off the train in Kii-Katsuura station, located just a short ride from Taiji.

Today is my third morning in Taiji, Sunday, September 29, 2013.  I get up at 4.15 AM, and it’s pitch black outside.  Warm wind blows as I get in the car with my new friend, the other Save Japan Dolphin Cove Monitor, Sakura Araki from Japan.  We are anxious and hope that the wind is still too strong so the dolphin hunters won’t go out.

We stop at a small supermarket to get coffee.  As I walk out, I see a Japanese man sitting in his car, talking on his cell phone.  Back in the car, Sakura tells me that he is a dolphin hunter. Adrenalin shoots through my veins.  I’m surprised, shocked, and afraid.  Is this one of the 24 local fishermen who have been killing thousands and thousands of dolphins and whales?  This seems so unreal!

As we arrive at the Fishermen Union Harbor, two police cars are already there.  We see the hunters from a distance, walking to the boats in their white butcher boots.  At 5.40 AM all 12 banger boats make their way out of Taiji harbor.  I stand by the water at the parking lot; the boats pass me by, one by one.  And I silently pray that they won’t catch anything.  I take pictures and videos while my whole body is shivering.  It’s an awful feeling to just stand on the side and watch these clean boats pass by, knowing they might soon come back bloody with slaughtered dolphins on them.

In Taiji Harbor, where you can and can’t go is clearly marked in English, not just Japanese.  Photo by Viktoria Kirchhoff.

But still, I know every voice counts!  And every person, Westerner or Japanese, who stands here to show their support against the killing of dolphins, makes a difference – long-term.   They know the world is watching.

We drive up to the lookout point.  It’s gorgeous up here, beautiful nature, warm wind, and amazing view over the great Pacific Ocean.  Serene paradise you would think.

But I cannot enjoy it.  I’ve never been at a place where that much beauty and horror are so close together.  I check the ocean for the boats – I can see them about four kilometers offshore, in “search” positions.  Sakura informs me that since it’s so windy, they cannot go out too far; they stay closer to the shore to spot pilot whales which tend to travel closer inshore in windy conditions.

We wait for the hunters to come back, still full of hope that they will not catch anything.  The minutes are long.  Two policemen come over to talk to us.  They are very friendly and only doing their job, ensuring that we don’t do anything stupid that would put us straight in jail.

It’s 7.30 AM, the boats are on their way back towards Taiji harbor.  I’m so relieved and grateful!  Cove Monitors are happy and smiley again.  A huge tense energy has just left the lookout point.  I can actually appreciate the beauty and powerful nature I’m surrounded by.  The Cove remains blue for the 11th consecutive day.  A blissful day!

The dolphin hunter boats return to Taiji harbor, this time without dolphins.