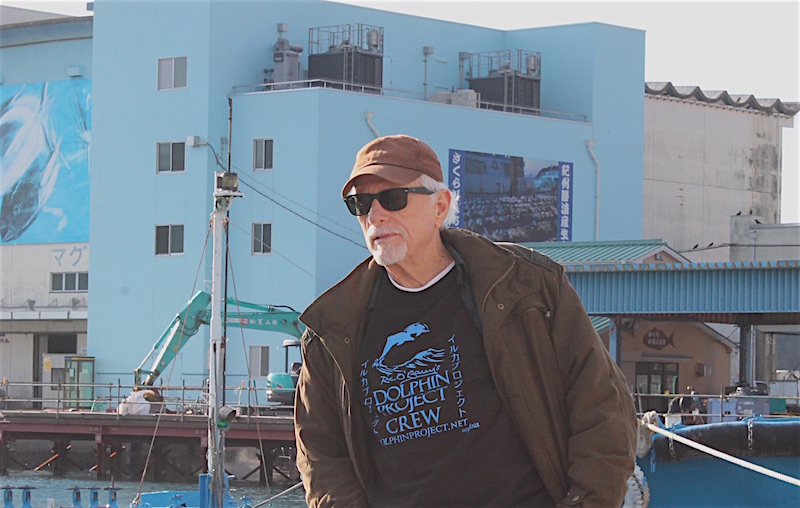 When Richard O’Barry walked through the doors of the immigration department at Tokyo’s Narita Airport on January 18, he expected a “normal” delay of a couple of hours. Ten days later, he remains incarcerated at a detention facility, not far from the airport, with no word on when he will be released.

O’Barry is no stranger to Japan, having visited Taiji for 13 consecutive years in his work to expose the brutal dolphin hunts, taking place there annually. His work was the subject of the 2009 Academy award-winning documentary “The Cove,” and while the movie shed light on the unimaginable cruelty of the drives, it also caused increased suspicion and scrutiny of O’Barry himself.

The first question he asked was not about his detainment, but whether the dolphin hunting boats had gone out.” ~ Lincoln O’Barry

His comment about the boats referred to the hunters who go out between September and March, searching for pods of dolphins to either slaughter for food – a practice which deeply concerns O’Barry, due to the toxicity of the meat – or capture for marine parks and aquariums throughout the world. One of the most gruesome hunts of the season took place last week, where a large pod of 50-60 striped dolphins were driven into the cove and slaughtered.

I just got to see Ric for about 30 minutes. The moment he saw me our eyes met, a big smile covered his face, he raised his hands in the air and said, “Yeah!”

O’Barry’s roots to the country go even deeper, with a decades-long history of visiting Japan, and many friends made there over the years.

“Dolphin Project has been working peacefully and lawfully with the people of Japan since 1975. My dad has been visiting The Cove in Taiji for over 13 years, always abiding by the law. He is clearly being held for political reasons.”

O’Barry also worked to assist the people affected by the Fukushima nuclear disaster of March, 2011.

“Ric is a man that really does care for Japan and the Japanese people. He accompanied me twice on missions up to north Japan, spending thousands of dollars purchasing and passing out supplies for the people in temporary housing.” ~ Enson Inoue Mixed Martial Arts Champion So why now, on a cold day in January, did the Japanese target O’Barry?

“I’m being held in one of the most notoriously dangerous prisons in Japan on trumped-up charges. The false charges are nothing more than political accusations, not evidence based on facts.” ~ Richard O’Barry

Ironic, considering last April, O’Barry was welcomed by the Government of the United States, when he presented Dolphin Project’s petition containing over one million signatures to the Obama Administration at The White House, and requested help to end Taiji’s dolphin trade and slaughter. One week later, the World Association of Zoos and Aquariums (WAZA) threatened to oust the Japanese Association of Zoos and Aquariums (JAZA) from their membership, for continuing to take dolphins from the Japanese drive fisheries. (JAZA has since complied, stating it would expel members that continue to buy dolphins caught in drive hunts. Despite JAZA’s supposed compliance, Dolphin Project continues to monitor activities at Taiji.)

Making O’Barry’s captivity even more disturbing is a 2015 report from the Economist Intelligence Institute, demoting Japan in their Democracy Index from a full democracy to a flawed democracy. The report cities Japan’s increasing media censorship and political pressure on businesses to withhold advertising in unfavorable publications enough to push the country’s scores down. *Source: Japan Times, 1-26-16

Just last week, the Tokyo High Court overturned an earlier ruling ordering the state to pay damages to the family of a Ghanaian who died after being overpowered by immigration officials during deportation. The 45 year-old man died after being restrained when he was put on a flight to Cairo at Narita airport near Tokyo in March 2010. *Source: The Mainichi, 1-19-16

O’Barry had previously complained of inadequate nutrition and sleep deprivation, prompting a visit by the American Embassy. While these issues seem to be resolved, the question still remains as to why he is being held in a facility which houses dangerous criminals?

The deportation process, from start to finish, could take up to 60 days, during which O’Barry would continue to be forcibly confined. To circumvent this process, he could sign an admission of guilt, a move guaranteed to ban his return to Japan for several years. Yet, despite a visit to the doctor’s after complaining of chest pains, and the potential for ongoing health risks, O’Barry refuses to sign any confession of wrongdoing.

His work methods are 100% peaceful. Since 2003, O’Barry, driven by empathy and determination, has been bringing attention to the dolphin massacre, a practice so cruel, it continues to be surrounded by secrecy and denial. And I believe this is why Japanese authorities are so committed to putting duct tape over his mouth.” ~ Helene Hesselager O’Barry

The more Japan escalates its attempts to muzzle O’Barry, the more the world is watching – and judging.

Whatever the immigration outcome of O’Barry, he has already won in the courtroom of public opinion. Global public sympathy is on his side, whereas Japan looks overly sensitive on this contentious issue of dolphin hunting.”

Japan would be wise to pay attention to the mounting international criticism of their treatment of O’Barry. For a man who has spent much of his life calling for the release of captive dolphins, we now call upon Japan for the release of Ric O’Barry.

Dolphin Project has mounted a legal defense fund, as our legal costs are escalating. All donations are greatly appreciated and urgently needed.

Contact the Embassy of the United States in Tokyo, Japan and demand the release of Ric O’Barry.

From the United States:

Thank you to Congressmen Ted Lieu, and everyone worldwide who has fought on Ric O’Barry’s behalf. Your efforts are greatly appreciated.