Not Tradition, Nor Culture – Just Cruelty 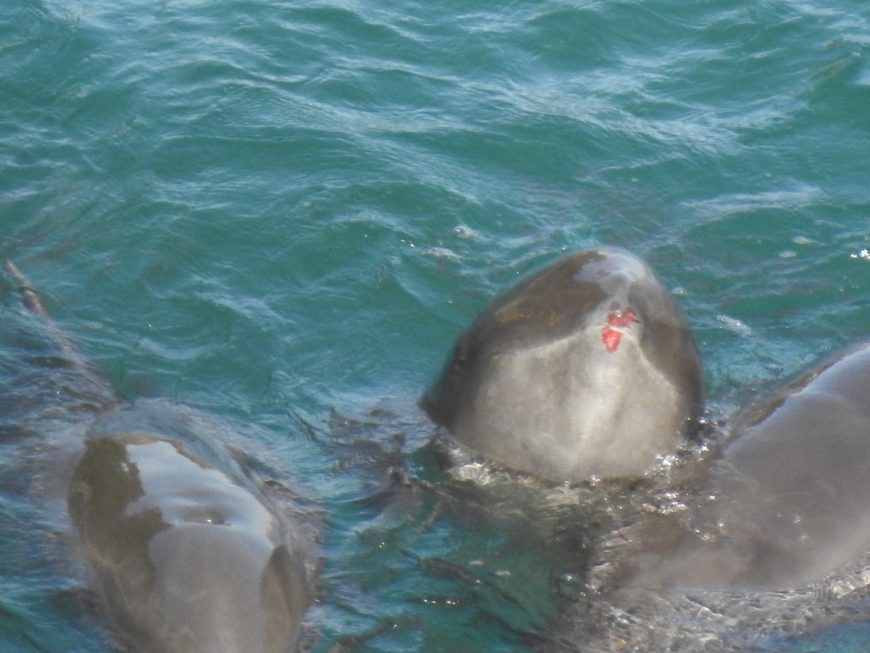 TAIJI, 11-13-17: The day started out like any other, with a parade of banger boats heading out on the ocean to search for pods of dolphins. As we watched, we had no idea of the brutality this day had in store for the dolphins attempting to migrate past the coast of Taiji.

We waited and waited, hoping to see the banger boats return empty-handed. The later it got, the more worried we become. Soon, our worst fears were realized as we saw a line of 10 banger boats far out on the horizon. It’s hard to describe the sickening feeling one gets when seeing the splash of dolphins swimming for their lives. In silence, we watched as the line of boats moved closer and closer towards us. 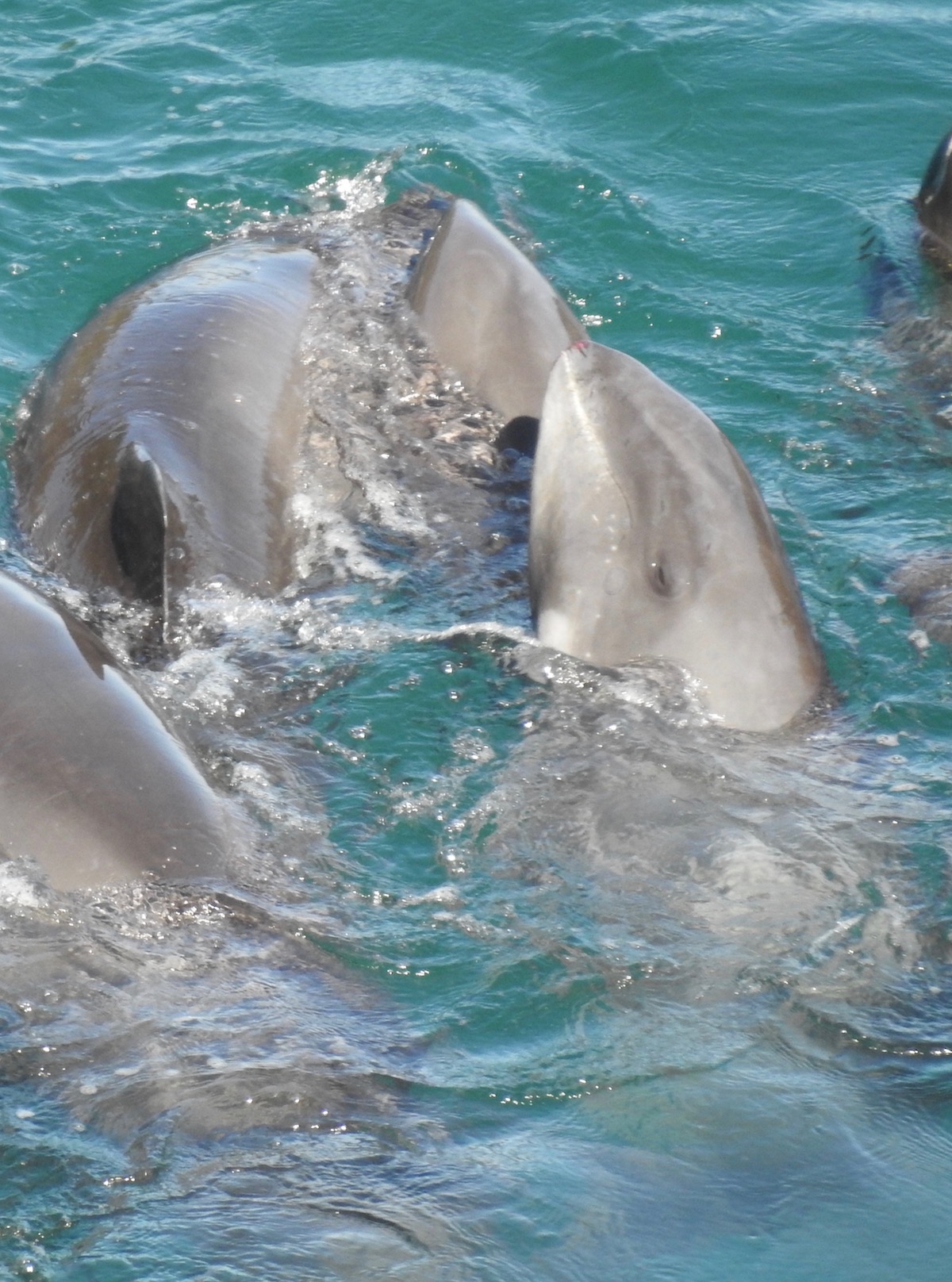 Melon-headed whales huddle around one another after being driven into The Cove, Taiji, Japan. Credit: DolphinProject.com 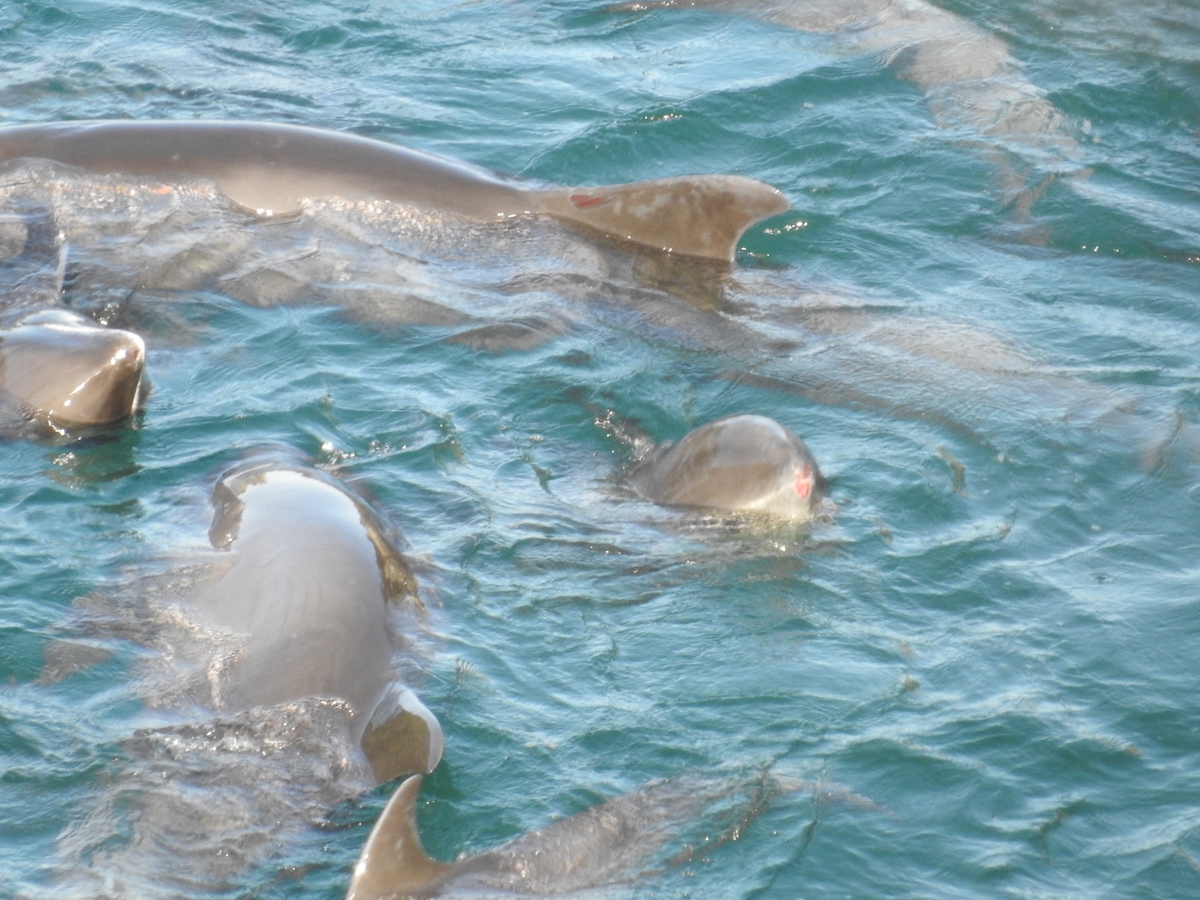 After climbing the stairs of Takanabe Hill, we positioned ourselves on the point to watch as the drive got close. We had a glimmer of hope as the dolphin hunters were having trouble maneuvering the dolphins around the fishing nets, just as they had on the previous drive. And again, some of the dolphins escaped. Half the banger boats chased after them while the other half continued to drive the remaining dolphins toward the cove. As hunters gave up on those who had got away, fate had prevented any escape for the dolphins now trapped below us, as a net was dropped behind them.

We checked our photographs in order to get a positive identification on which species these dolphins belonged to, and saw the now-familiar white lips and dark eye patches of melon-headed whales – a new species, now all too familiar to us. Tightly, the group of 30 circled together as hunters closely examined them. This time, no trainers arrived, and then, the horrors began. 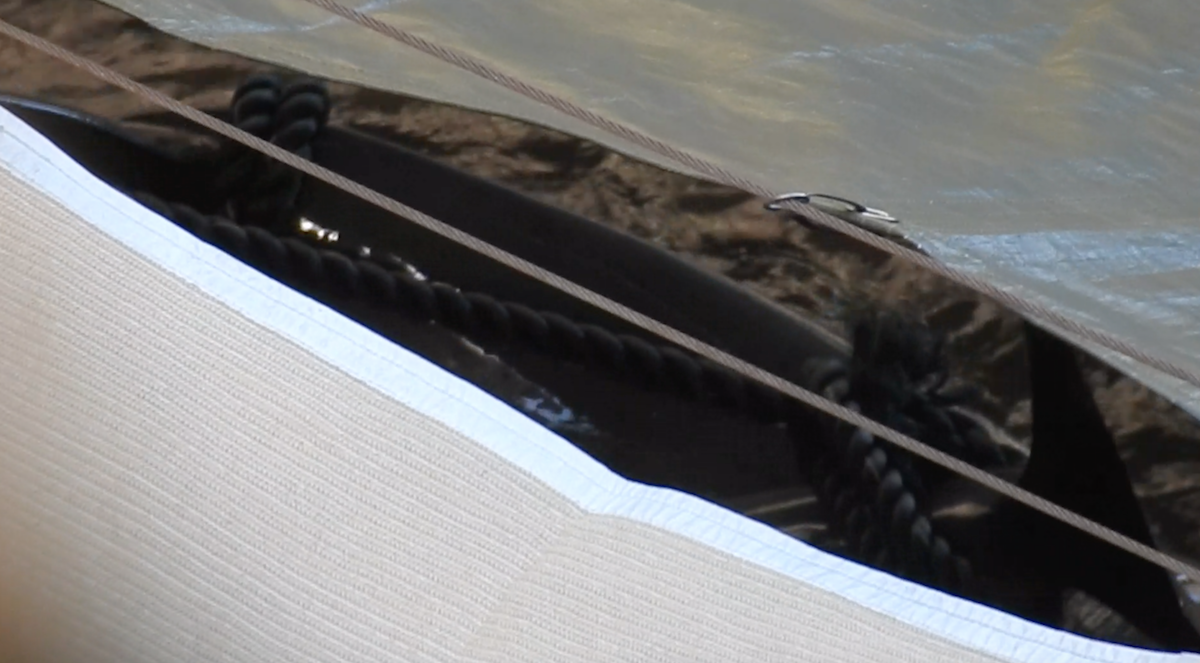 Hunters came directly towards the melon-headed whales, their engines pointed at the mammals. Loud noises and a strong stream of bubbles frightened the dolphins further towards the killing area, and predictably, complete panic ensued. Although their escape attempts were valiant, they fought a losing battle with many dragged underneath the tarps.

While the dolphins were hidden from our view, they couldn’t mask the sounds they made in their death throes. Dolphin Project Cove Monitors live streamed as the sounds of loud and frantic tail slapping filled the air – the last sounds these dolphins would make before losing their lives at human hands. The hideous sounds seemed to last an eternity, yet the water didn’t turn as bloody as would be expected. The reason? When the bodies were pulled out of the cove, we could clearly see a plug jammed into the dolphins, right behind their blowholes, done to prevent the outward flow of blood. The dolphins killed in Taiji’s drive hunts are killed by pithing, where a sharp metal rod is hammered into the spinal cord, severing it and causing paralysis. Dolphins are supposed to die a quick death, however, the noises we broadcast to the world were anything but quick. Obviously, the mammals are taking a much longer time to die, suffering greatly in the process. 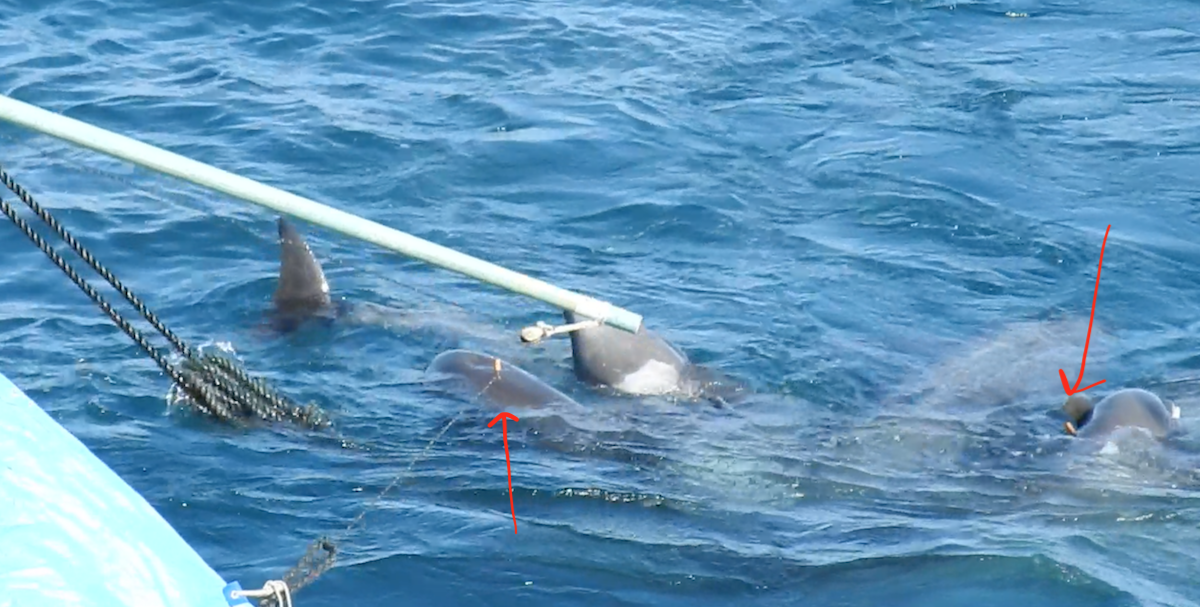 The surviving dolphins from today’s slaughter were forced to watch, as their pod members were killed under the tarps.” ~ Helene O’Barry, Dolphin Project Cove Monitor

Those dolphins who were not selected for slaughter were pushed away from their dead or dying family members. Being dolphins, with such strong family bonds, they didn’t want to leave. Skiffs were used once again, turned around to terrorize the dolphins into moving away from the killing beach. Dolphins panicked and threw themselves on the rocks while others were simply run over by the boats. We watched helplessly as one dolphin appeared to be too weak to swim and was simply pushed through the water by the jet stream of bubbles, floating but not swimming. A net was drawn to prevent them from returning to the killing area. Instead of moving far away from the horrors, the dolphins stayed as close as they possibly could to the killing area. Twice, divers were seen grabbing a dolphin from underneath the tarps and guiding it away before throwing it over the net to join the other survivors. In a particularly heart-breaking moment, one young melon-headed calf was seen trying to get over the net to return to the killing area, perhaps in search of a lost mother. Finally, the cove went quiet. The tarps were pulled back, and the slaughter was over. 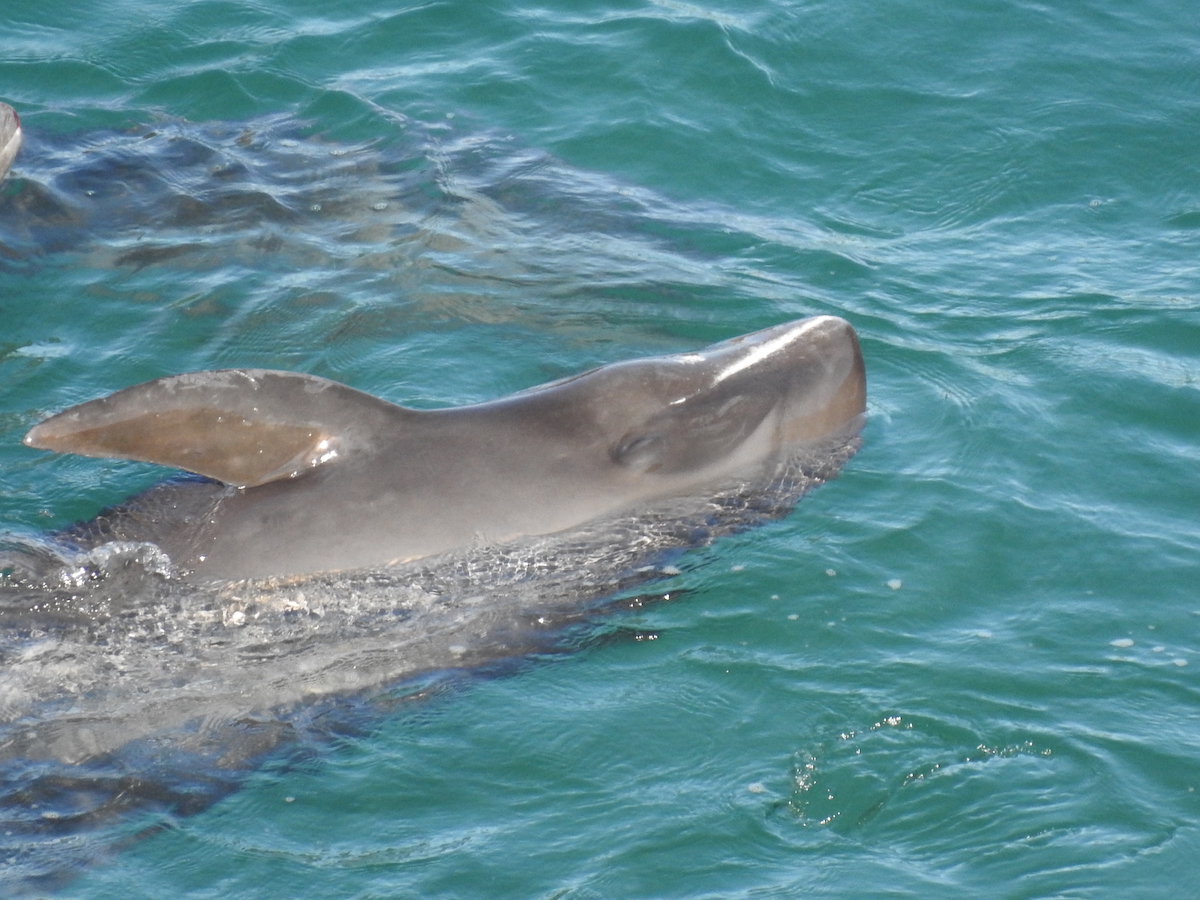 We waited for the removal of bodies. The hunters did not seem to be too concerned as lifeless bodies were repeatedly exposed as skiffs dragged them out, right past surviving family members. It is impossible to imagine what was going through the minds of these sentient mammals as they witnessed their beloved family members – 18 in total – dragged right past them, never to see them again. As we observed the survivors, we could see one dolphin floating on its back, surrounded by several pod members.* Other dolphins had clearly visible injuries, with blood on their rostrums and dorsal fins.
*Scroll down for video.

In a repeat of a few days ago, the remaining members of this pod were eventually forced out of the cove. The same wall of sound that drove them into this nightmare was now terrorizing this group of 12 away from it. Unfortunately, there would be no reunion of family members as the decimated pod would now attempt to survive, broken, traumatized and injured. How things can change in the matter of a day.