Not Everyone Loves Marineland! 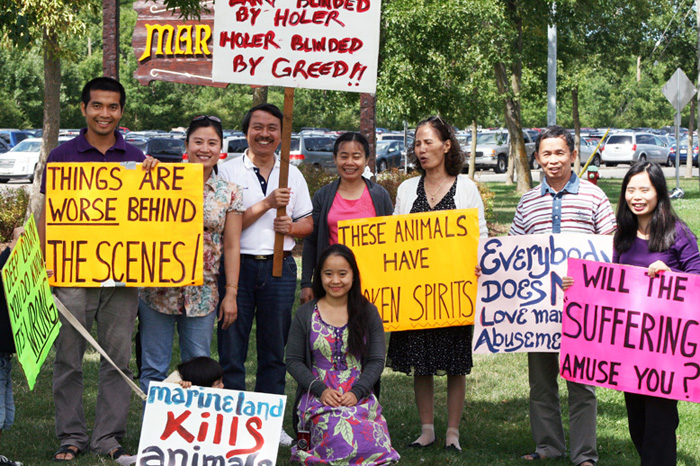 NOTE: Rachel Larivee joined me in Japan a couple of years ago to oppose the killing of dolphins in Taiji.  She is such a gem!  She continues to lead efforts in Canada against the captivity industry. – Ric O’Barry

August 18th, 2012 was a historic day at Marineland, Niagara Falls, Canada.  The demonstration, organized over the past 5 months by Marineland Animal Defense, a local grassroots chapter of Niagara Animal Defense League, along with Ocean Voice London, blew up in the wake of investigative reports printed in The Toronto Star during the three days prior to the event.  Typically, demonstrations, which take place during Marineland’s open season, draw anywhere from 20-50 people.  Organizers anticipated larger numbers after The Star printed the articles, but never imagined it would reach more than 500!

The momentum started last week when Phil Demers, an ex-trainer, spoke out against the park and the sad state of the animals being held there to The Star.  He spoke openly with The Star about neglect in marine mammal care, poor water quality, understaffing and the death of young Skoot, a baby beluga who died last month after being attacked by two others belugas she was forced to share space with.

I had the pleasure of meeting Mr. Demers, who captivated the crowd that united on this day.

“We all have ideas how to resolve this and how this should end.  But, at the end of the day, we are all united, we are all one front for one reason, and we are the voice, the opinions, the expressions of sympathy, the sadness and the plight of the animals,” he told the demonstrators.

Demers has posted an online petition, aptly titled, ‘Save Marineland’s Animals’, which can be found at the following link.

Most of us can agree there were several outstanding moments at this particular demonstration.  For me, it had to be those amazing families who took the time to listen to our plea, and thus changed the course of their day and their opinions on Marineland forever.

The Phuong family drove from Montreal for a vacation to the falls, and, when their tour bus stopped at Marineland, they intended to spend the day within the park gates.  The presence of demonstrators made them curious, and Lan Phuong, 26, was urged by the family to find out what all the fuss was about.

“We couldn’t in good conscience go in now that we know what this is all about.  If we go in it might be seen that we support abuse of animals, and we don’t,” she said, after learning the harsh truth regarding the animals.

The Phuong family is one of many that decided they don’t love Marineland and turned away from their planned visit.

Shannon Binder, of Hamilton Ontario, was using her season pass bringing her two children and a neighbors’ son to the park for the day.  She approached protesters with the 3 children, ranging in age from 5 to 10yrs, and was handed a copy of The Toronto Star.  She began to explain the article to the kids, who didn’t react favorably about the sad state of affairs for Marineland’s animals.

When I spoke with young Jade Binder, 10, about what she thought, she replied, “It makes me sad. I don’t want to come back here.”  She also told me she vows to spread the word amongst her friends. S he melted my heart.  She and the other families prove that peaceful demonstrations work when you make yourself approachable.

The support from the many patrons and demonstrators was overwhelming.  A group of vacationers from Italy and France were on site.  While visiting the falls they heard about the protest and decided on that day, they’d spend their vacation at Marineland outside with demonstrators.  They took posters with them when they left, vowing to start their own campaign against Marineland in France.  (Marineland in Antibes, France, is not affiliated with Marineland Canada in any way.  Their common ground is their marine mammal displays and of course, their name.)

Saturday’s protest was a huge step forward in our campaign, aptly called, Operation Splash Back, by Marineland Animal Defense.  Many are wondering what’s next?

Well, aside from the obvious, educating the public about captivity and how detrimental it is to the marine mammals (among others), who fall victim to it’s cruelty, is the next step.  We are still calling on the public to contact our federal government in hopes of breathing new life into a Private Members Bill, brought forward in 2001.  That bill urged a closure of the wild capture loophole.  The bill, if passed, would end the import and export of marine mammals for captivity in Canada.  That means no more new animals imported to Marineland – ever!

I believe we can do this, collectively. Now is the time.  Now is the place…to change the fate for captive marine mammals in Canada.  Animals can speak and there’s enough of us listening!