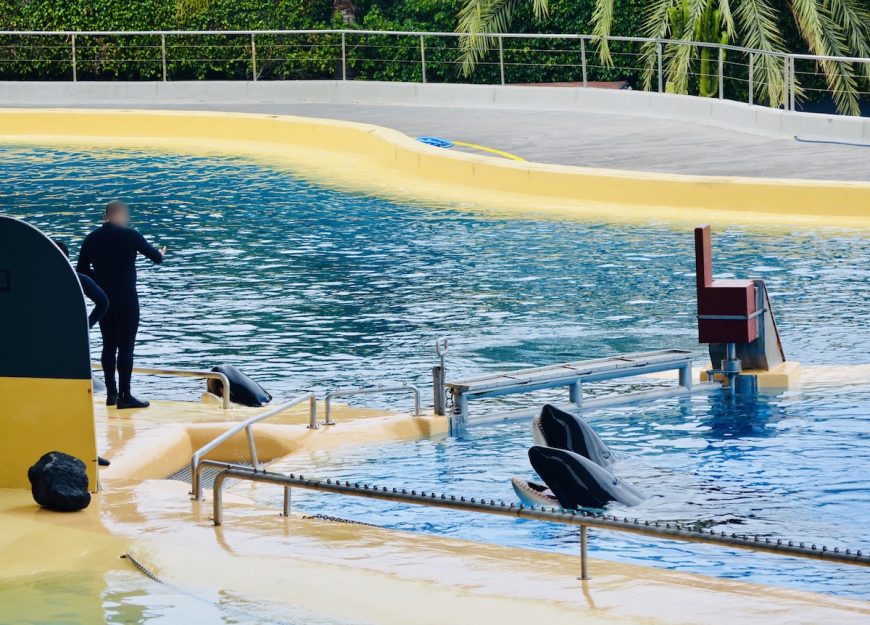 On November 7th, 2021, Expedia announced this fantastic news on Twitter: “We recently adjusted our animal welfare policy. As a result, attractions and activities that involve performances by or interactions with dolphins and other cetaceans will no longer be available on our sites.”

Expedia is one of the world’s largest travel companies. Its decision to stop selling holiday packages that include dolphin shows and captive dolphin interaction programs sends a powerful message to consumers worldwide that it’s time to end the practice of capturing, confining, and exploiting dolphins in the name of superficial holiday entertainment. And we thank them for that.

Loro Parque, a zoo and captive dolphin facility in Tenerife, Spain, was quick to publish a statement on its website in response to Expedia’s decision. In it, Loro Parque paints a picture of being an institution that has the animals’ best interests at heart, as opposed to over-emotional, propagandistic, and even unlawful animal rights supporters who want to shut down zoos altogether. They describe a battlefield-type situation with animal-loving, scientifically sound, and highly qualified zoological associations on one side, and extreme animal rights people on the other. The facility has good reason to be unsatisfied with Expedia’s decision to no longer support the use of dolphins in tourist attractions, as they must have lost access to thousands of potential paying customers.

I find it ironic, however, that Loro Parque uses the term scientific evidence to justify the position that dolphins belong and thrive in concrete tanks. It is ironic because confining orcas and other dolphins in barren tanks disregards the most fundamental knowledge that science has taught us about these remarkable marine mammals. Just by looking at dolphins a person can see they are built to hunt and swim in a world without any artificial barriers. Nature designed their sleek torpedo-shaped bodies to swim, dive, forage, and surf the ocean’s waves. And they should be free to do so for as long they want. They can’t do any of these things in a concrete stadium. Indeed, the lifelong incarceration of these ocean-roaming powerful predators defies all logic. 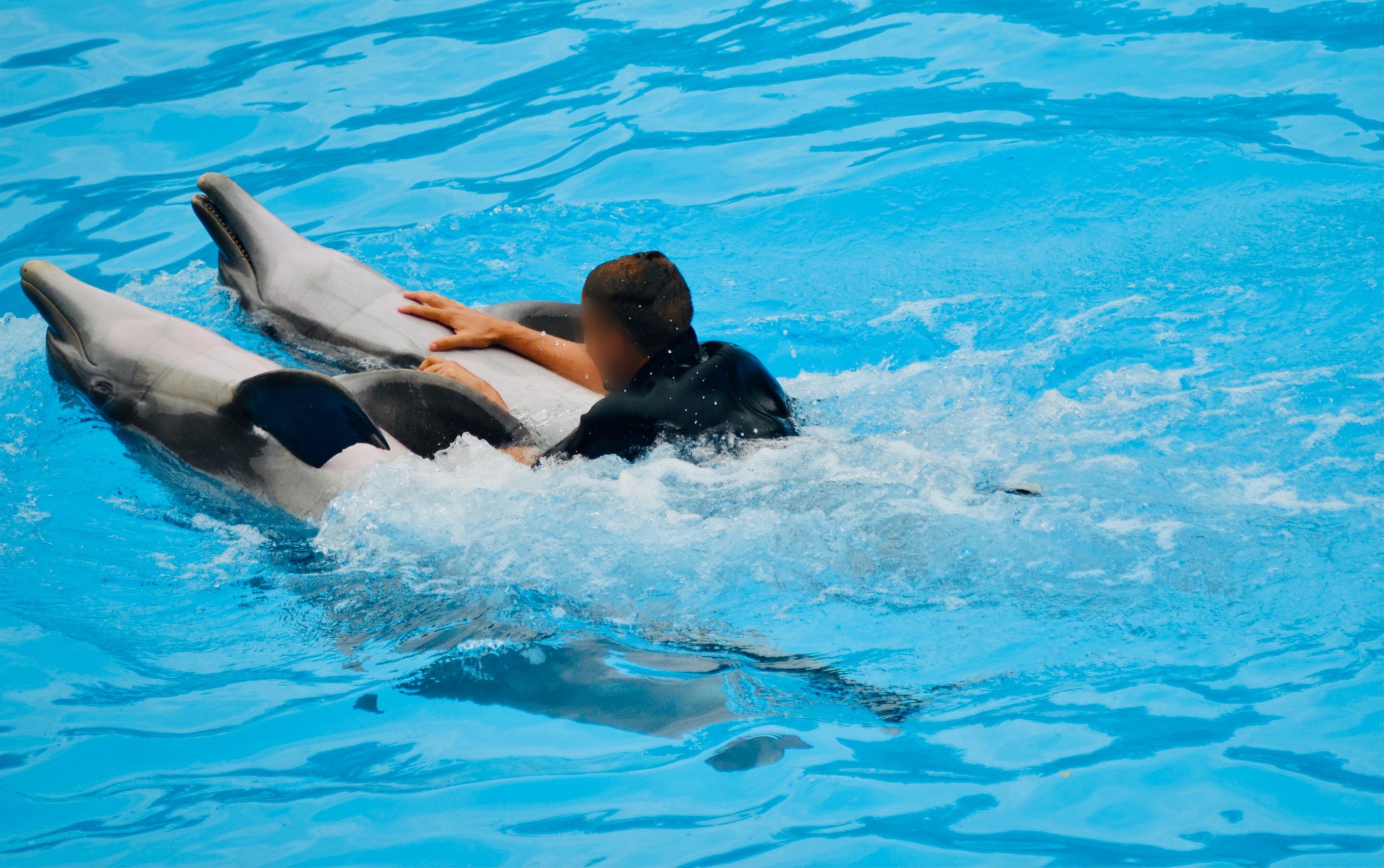 The theatrical content of the captive dolphin spectacle works against the spirit of wildlife conservation, in that it cherishes human dominance over nature. The image was taken at Loro Park in Tenerife, Spain. Credit: Helene O’Barry/Dolphin Project 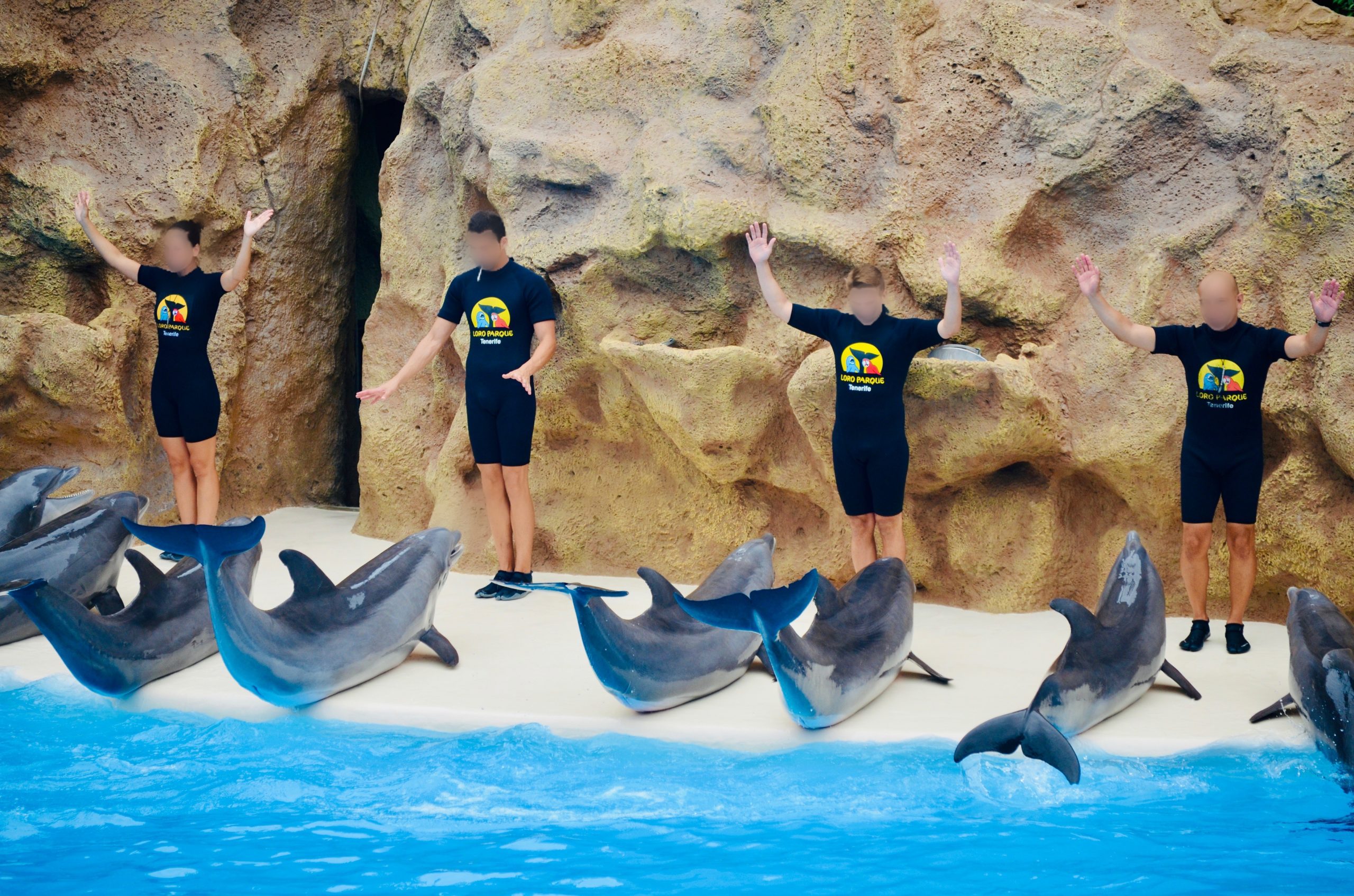 Captive dolphins around the world are incarcerated in bleak and barren concrete stadiums, where their natural abilities can find no expression. The dolphins in the photo have been trained to beach themselves on command, much to the delight of applauding spectators. Credit: Helene O’Barry/Dolphin Project

In its statement, Loro Parque introduces a new term for dolphin shows: cetacean presentations. I have never heard it before. It sounds better than dolphin shows, almost scientific and environmentally friendly. I suppose that is why Loro Parque uses it. However, the term does not conceal how dolphinariums typically depict dolphins as happy performers and entertainers. Nor does it change the fact that dolphin trainers methodically exploit the dolphins’ powerless predicament to make them perform abnormal behaviors that have tremendous entertainment value but would make no sense to dolphins in nature.

Loro Parque keeps orcas and bottlenose dolphins in concrete stadiums and uses them in shows. I have seen both. The orca show was loud and theatrical. It featured orcas spinning around in the water, beaching themselves onto the concrete slide-out, and performing other meaningless tricks for rewards of dead fish and artificially colored gelatin. During the equally theatrical dolphin show, trainers used dolphins as surfboards, and spectators screamed in delight as the dolphins gave their trainers speedy rides across the tank. The spectators’ amusement grew even bigger when one of the dolphins had to pull a child from the audience in a small rubber boat. I think it is wrong to exploit one of nature’s most complex and gregarious beings by making them perform such demeaning stunts. It certainly does not correspond with the “love” and “high-quality treatment” that Loro Parque prides itself on in its response to Expedia’s new animal welfare policy. I cannot possibly see Loro Parque’s dolphin shows as anything other than an attempt at programming dolphins to act in ways that reliably attract huge, fun-seeking audiences.

The most noteworthy notion in Loro Parque’s statement, for me, is that dolphins do not need the ocean to thrive. Loro Parque states: “Recent published work also demonstrates that what is most important for maintaining the welfare of cetaceans in dolphinaria is not the type of enclosure (floating cages, sea-based facilities, or conventional dolphinaria) but the implementation of an appropriate environmental enrichment program, such as that provided in accredited zoos.”

It is as if Loro Parque is trying to make its so-called enrichment program appear natural in some way by strategically placing the word environmental in front of it. But there is nothing natural about the restricted living conditions of dolphins incarcerated inside a small concrete amphitheater, where, for the rest of their lives, they will have to perform repetitive shows aimed at attracting holiday makers looking for some casual entertainment. And to say that dolphins in dolphinariums need enrichment to thrive is revealing, in that it acknowledges their existence is fundamentally poor and deprived. Dolphins in concrete stadiums need enrichment only because their confines are so boring and void of anything natural and meaningful to them. They have nothing to look at and nothing much to do within the barren walls of a concrete tank. Yet, Loro Parque insists this is an appropriate living space for dolphins, even though the dolphins’ natural abilities, including their remarkable foraging skills and sophisticated use of sonar, are rendered useless there. 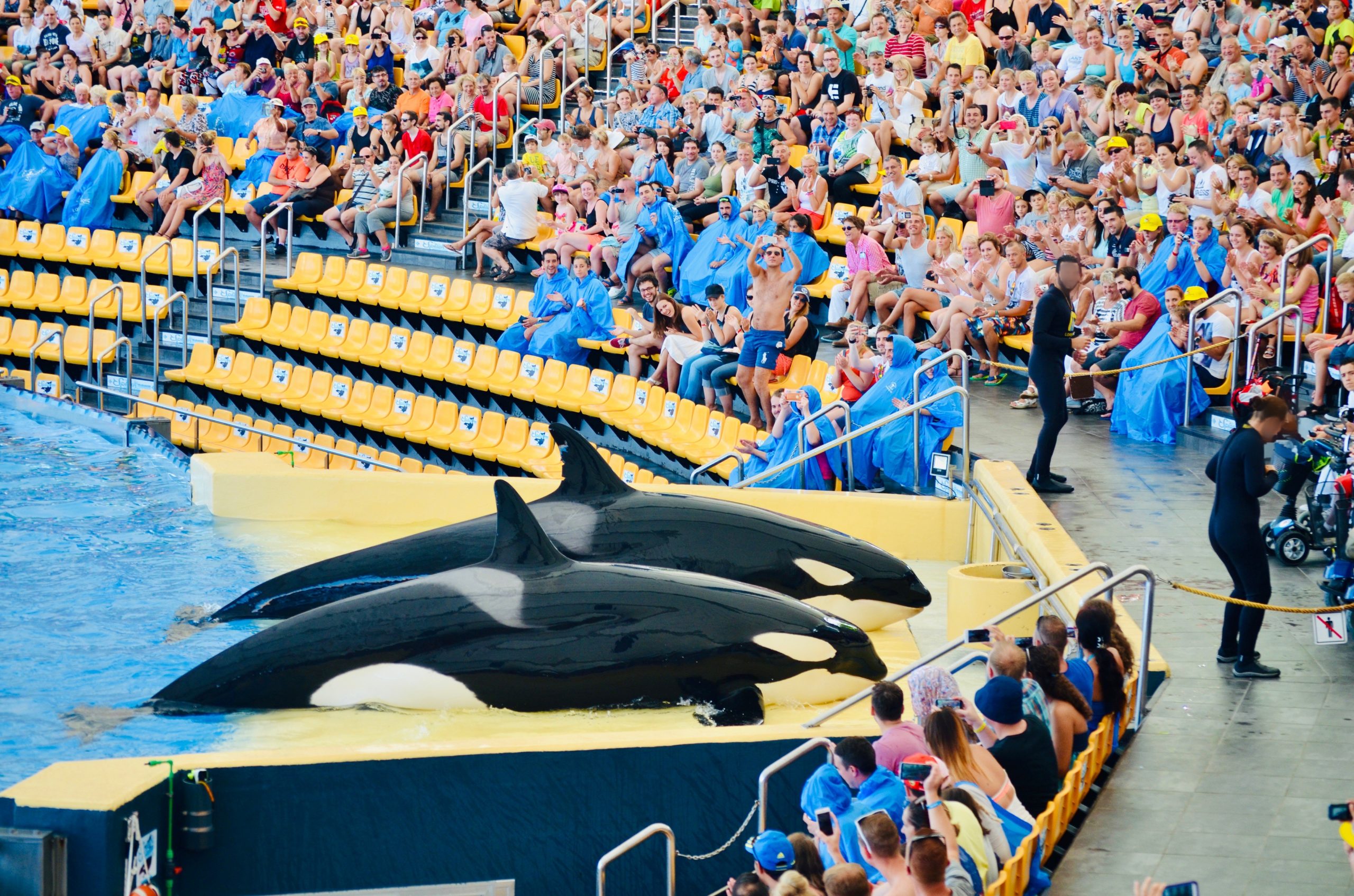 Kohana (in the front) and Skyla beach themselves during the loud orca show at Loro Parque in Tenerife, Spain. Born in February 2004 to captive-born Kalina and wild-caught Tilikum, Skyla was a two-year-old calf when SeaWorld separated her from her mother and shipped her off to Spain. Kohana, who was also fathered by Tilikum, was three and a half years old at the time. Both Kohana and Skyla grew up without the guidance of their mothers from a very young age and have been performing in shows at Loro Parque’s concrete orca stadium for about fifteen years. Credit: Helene O’Barry/Dolphin Project

Dolphins are highly intelligent marine mammals with complex communication skills and social behaviors that they pass from one generation to the next. This alone should tell us they belong in the oceans where their natural abilities have developed and perfected over millions of years. Saying dolphins do not belong in captivity is not based on propaganda and emotions. It is based on common sense and science.

Featured image: The orcas at Loro Parque will spend their entire lives surrounded by concrete walls and impenetrable iron gates. They have no real choices in life and depend completely on their human keepers for food and attention. Credit: Helene O’Barry/Dolphin Project