New Dolphin Prison in the Bahamas 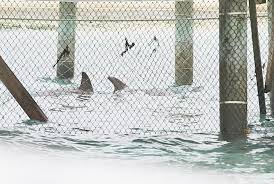 I’ve recently been at several demonstrations, as recorded in these blogs, in Canada and in Belgium, urging the closing of dolphin parks that should have been closed long ago.

Yet, even now, with a great deal of publicity and public education about the dangers of captivity to dolphins, new proposals spring up.

Fortunately, there are activists around the world who are working to stop these new proposals, which is far easier than closing down a facility that has been built and is worth untold millions of dollars.

Activists Sonya Alvino and Sam Duncombe of reEarth have succeeded in putting a temporary halt on a dolphin facility planned for Blackbeard’s Cay in The Bahamas.

They were able to highlight legislative breaches that violated development and animal protection laws in The Bahamas, resulting in the government rescinding three business licenses pending a full investigation.

This new Bahamas facility plans to import 8 dolphins from Anthony’s Key in Roatan, Honduras, for the typical “swim-with-dolphin” scheme.  Partnered by Carnival Cruise Lines, they will become an exclusive excursion for Carnival Cruise passengers who will be ferried to the island for a 3 – 4 hour period, of which only one hour will actually be spent with the dolphins in the water.

Needless to say, dolphins under stress are not good matches for a major tourist attraction.  Dolphins are captured by horrendous measures, either driven into coves or chased and netted at high speeds.  Captivity separates dolphins from the two most important things in their lives:  their families and their freedom.  Tourists have been bitten and rammed by dolphins.  Yet, the dolphinarium and the cruise line can expect to charge hundreds of dollars to gullible tourists for their 3-4 hours with a dolphin that would rather be elsewhere.

Captive dolphins don’t “swim” with tourists because they like to – they have to be trained to do it, through food deprivation.

The head developer, Samir Andrawos, leaves a checkered history behind him in St Maarten where he was unsuccessful in developing a similar venture.

reEarth has secured close to 65,000 signatures on their petition against this facility, but still need more to counter the plan to attract the 4 million tourists who travel to The Bahamas on cruise ships annually.

Please help the dolphins by signing the petition here.