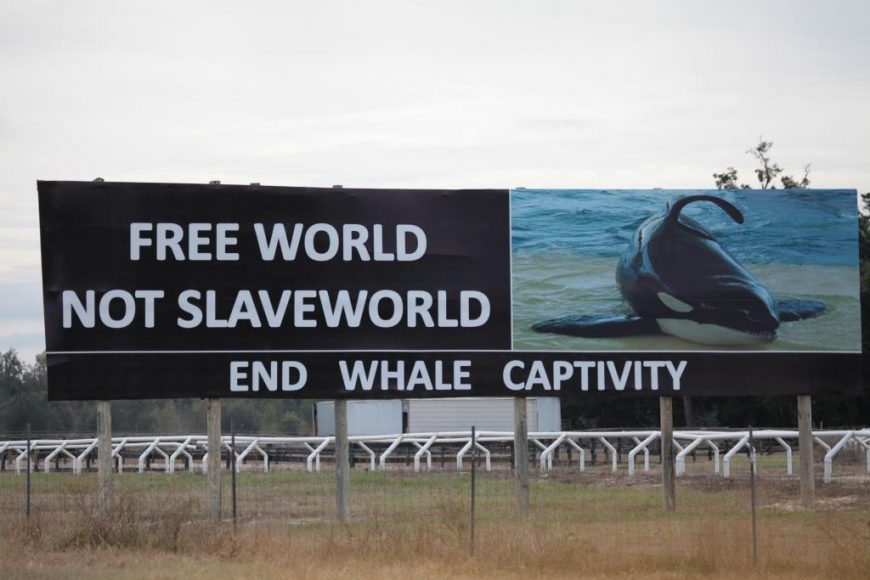 A new billboard challenging the keeping of whales and dolphins in captivity is making waves across social media. Jan Pettifor of Hudson, Florida, erected the billboard on Interstate 75 as a challenge — not just to SeaWorld, but also to tourists planning a visit to the Orlando-based marine park. The billboard, which features an image of a captive orca alongside the words, “Free World Not Slaveworld: End Whale Captivity,” is located about three miles before the Florida Turnpike which leads to Orlando. Pettifor said she chose the southbound location near exit 329, because I-75 is the main north/south artery into Florida from Georgia and the northern states. Ironically, it was SeaWorld’s own advertising that gave the activist the idea. Pettifor told the Dolphin Project:

Earlier this year I was traveling down from the north back to Florida and as you cross over the Georgia border into Florida you start to see billboards advertising cheap tickets for SeaWorld at the upcoming visitor centers/gift shops. That is where I got the idea from for my billboard.

Pettifor isn’t a newcomer when it comes to challenging SeaWorld and other marine parks that hold captive cetaceans. She’s been spreading the word since the early 90s and waiting for something like the documentary, ‘Blackfish‘ to “wake the masses up:”

I was on vacation and a guy was giving out flyers for SeaWorld in  Orlando and I told him what I thought of that place. So many people are caught up in their own little bubbles. I still cannot believe whales and dolphins are being kept for performing  circuses.

Pettifor, who heralds from Fleet, Hampshire, in the UK, but now lives on the Gulf north of Tampa, added that she is proud to be English and from a country where there are no captive whales or dolphins. “The UK public would not accept it,” she said. If you don’t know the activist personally, then you may have seen her fleet of cars. Inspired by a pick-up video truck at a SeaWorld protest that was designed by Orlando vet — Randall Cannon of ‘Take Your Blinders Off, Inc.‘, Pettifor decked out her cars to raise awareness about cetaceans in captivity:

It gave me the idea to use my cars to bring attention for captive orcas. It started with the graphics on my Lamborghini, then the graphics on the Viper which I took along to the protests outside SeaWorld , Orlando. Then I had the idea for the Orcamobile and bought an ex police cruiser, fiberglass orca whale and had the cage made for the roof.

She has since been traveling around the country in the Orcamobile — Marineland in March, Ontario in May, ‘Empty the Tanks’ at Shedd Aquarium in Chicago, and also the Miami Seaquarium. Pettifor heralds the vehicles as a way to reach the public and spread the world. “People are constantly taking photos and asking questions. People come up to me to thank me and say they have seen ‘Blackfish’, and many ask me if I’ve seen ‘The Cove‘ too,” she said. What the activist truly wants is for the public to see beyond the shows and to consider what captivity truly means for these animals:

My cars and the billboard are just trying to make people think. It is not difficult – if you have an ounce of common sense and compassion you realize to keep something so huge and so intelligent confined inside concrete is utter madness. I liken it to being locked inside your bedroom for the rest of your life. Enough to drive anyone insane. There are many reasons I explain to people why it is so cruel and outdated to keep whales inside pools, and the sonar aspect really upsets me. How can they use it when it just reverberates off the walls of the tank?

With SeaWorld stepping up advertising for the holidays — including billboard signs, Pettifor said she would like to put up more to counteract them. “There need to be more billboards like this to make tourists think before they buy a ticket,” the activist said.

So how did she do it? I kept the sign simple,” she explained, and “phoned around various billboard companies and got the best price.” The billboard cost $6000, and Pettifor  paid for it herself to be on display for one year. Times are indeed changing Pettifor suggests. “I counted all the different anti-captivity whale and dolphin groups I follow on Facebook and there are 48 different groups. I am sure I have missed some out. It shows how people worldwide have had enough of it,” she said. With public sentiment evolving rapidly, SeaWorld Entertainment Inc. remains resistant to change. Arguing that captive cetaceans are ambassadors for their species, Pettifor’s position couldn’t be more clear:

SeaWorld needs to stop artificially inseminating the female orcas for their sick circus and change their business model more towards rides. AB2140 — The Orca Welfare Bill, needs to be passed and there needs to be a worldwide ban on capturing whales and dolphins that are being sold to marine parks. Dolphins and whales belong in one place — the ocean. The rear of the Orcamobile/ Jan Pettifor

Featured image (Top): Jan Pettifor’s billboard on I-75. Located going southbound near exit 329 about 3 miles before the Florida Turnpike which leads to Orlando/J. Pettifor