Home/Blog/Campaigns/Japan/Kids/Never Be Silent, Never Give Up 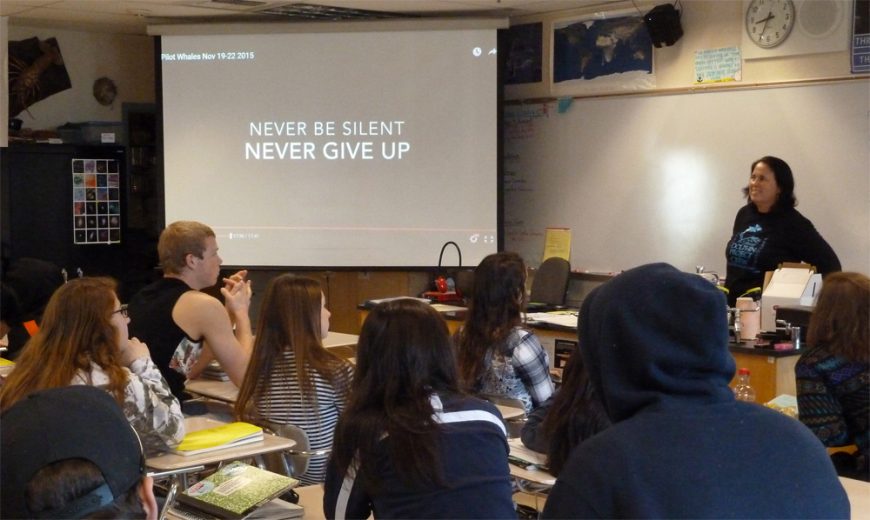 For the past four years, I have been traveling to Taiji, Japan in order to document the annual dolphin drives taking place there. As a Cove Monitor and Educator for Dolphin Project, I have always recognized the value in the powerful images captured on Dolphin Project’s Live Streams, as well as our informative written blogs. Not only do they provide a window into the unimaginable cruelty involved in both the slaughters and the captive selection process, they also serve to educate and motivate the world to take action.

I am also a high school marine biology teacher, which affords me the unique opportunity to spread awareness amongst young people about dolphins, dolphin captivity and the connection between the captive dolphin trade and the slaughters in Taiji. Long after returning home from each trip, I find myself needing to continue the work done on the ground, and commit to do whatever I can to help end the atrocities in this small town, of which the 2009 Academy award-winning movie “The Cove” was based on.

It is my belief that if we can lower the demand for captive dolphins, the drive hunts in Taiji would end, as they simply wouldn’t be profitable. Education = empowerment, and for me, the antidote to the poison of Taiji is education. As such, I have been creating educational presentations in order to teach kids about the realities of the captivity trade. Today’s kids are tomorrow’s activists.

Years ago, I began by just presenting to my own classes. Today, my presentations have grown from visiting other classes within my own school to traveling to other schools. I have visited classrooms from 3rd grade up to high school seniors and go to as many schools each year as my schedule allows. No matter what grade level, my message is always the same: don’t buy a ticket.

When I visit elementary schools, I do not speak of Taiji but simply show a video which compares and contrasts the life of a dolphin in captivity versus life in the wild. Most kids never think about what life is like for dolphins when the show is over. I help them see this “hidden reality” and by the end of the presentation, kids themselves reach the conclusion that NOT buying a ticket is the solution. I encourage them to share what they know with their family and friends, so they too can take the pledge to not buy a ticket to a dolphin show.

When I visit high schools, my presentations are more sophisticated, as I show the connection between the captive trade and the slaughters in Taiji. Most students are horrified by what they see, and they too come to the inevitable conclusion that stopping the captivity trade holds the key to ending the dolphin slaughters. Most importantly, they also promise to spread the word and inform others.

The other part of my presentations is to get students to share their thoughts by writing a message to Japan, asking them to end the slaughters. I have been extremely moved by the eloquence and compassion in these messages. The youth want a better world, and I believe they are sincere in wanting to right “wrongs.” They know that keeping dolphins in confinement is wrong, and killing them is wrong. Many take the pledge and also take the next step, asking what more they can do to help end the madness.

Nothing gives me more hope in seeing an end to the dolphin slaughters and an end to captivity than educating kids. It’s easy to do, because kids know what’s right. We just have to open their eyes and let them see for themselves.

I have faith in our youth, and I believe they will make positive changes. I have seen the hope in their expressions; the passion in their words and the commitment in their position to help dolphins. After the presentations, I receive many messages from kids I’ve visited, vowing never to go to a dolphin show. Many express they want to help dolphins remain free. I’ve had students accompany me to protests and join me in presenting to other students. Kids really do get it, and it all starts with education. I’m currently working on a new video and creating more interactive presentations. Together, we can help grow an educated society, one which sees the value in all life, and strives to protect the freedoms of others.