My First Time in Taiji 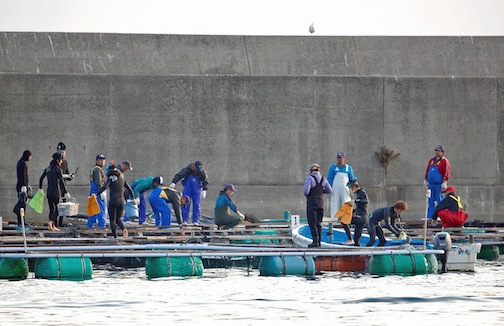 My name is Suzette, and this is my first time as a Cove Monitor in Taiji, Japan.  After watching The Cove, all I have ever wanted to do was go to Taiji and be a voice for the dolphins.  I have loved the ocean all my life… and I have always loved dolphins and felt that I have a connection with them.  I even named my company Desert Mermaids and have a dolphin symbol as my company logo.

I have been following posts on what was going on in Taiji for a long time and knew that I had to go there.   I went with an open mind, positive energy and love.

I was very lucky to meet Ric O’Barry, Sakura, Terran and Ryo.  They are all amazing people who have inspired me to keep on being a voice for the dolphins.

On my first day of arriving in Taiji, a pod of Risso’s dolphins were slaughtered in the Cove, and some of them were set free.  Later, I was lucky to witness a blue Cove, three days in a row.

My heart broke each time I went to these captive pens.  These dolphins were once wild and free, swimming with their family and friends.  Now they have to spend their lives in captivity.

I felt like I was witnessing something from a horror film.  Dolphin trainers and hunters working hand in hand with wild dolphins stolen from the ocean.  Watching these once wild and free dolphins being forced to perform tricks for food made me sick to my stomach.  The sea pens are so small.  These pens remind me of concentration camps.

Dolphins are smart, highly intelligent and free spirited.  This is the worse torture anyone can bestow upon them.

My first dolphin drive that I witnessed had my stomach in knots and my throat dry.  Tears were streaming down my cheeks as I watched the drive, hoping and praying that the dolphins would escape.  But they were soon netted off outside the harbor.  They were all chosen for a life of captivity, although three of them did not make it and died due to the stress of the drive and the transfers.

Seeing these dolphins being transferred was so sad.  I wonder how they felt?  They never did any harm to any human; yet again we as humans show them no mercy.

I have been asking myself the same question for a long time: Is this really tradition?  I have spoken about this to a lot of my Japanese friends.  Most of them do not know that this is happening, and most people in the town of Taiji do not know this either, and a lot of Japanese are against the dolphin slaughter.  It is only a small handful of people slaughtering the dolphins, and most Japanese do not know about the mercury content in dolphin meat.

I was very lucky to spend a few days with Sakura and Ryo in Taiji, as both are Japanese activists.  Sakura always talks to local people living in Taiji.  Taiji is a very small fishing village, and the locals are not much exposed to Western culture, let alone having Western tourists in their village.  An old man told me: “Go Home.”  I have lived in Japan for many years and understand their culture, so I was not angry with him for saying this to me.  I always felt safe and protected in Taiji and would like to thank the policemen for doing such an amazing job, to make sure that everyone stays within the laws and are there for our safety.

We have to go to the root of the problem, and I agree with Ric O Barry: we cannot go around this problem, as the solution also has to come from the Japanese people.

I wish that I could stay longer in Taiji.  But all I can do is watch and report.  I need to leave Taiji and approach the root of this problem: The Consumer.  I will also share my experience with the younger generation and educate them on why dolphins in captivity is so wrong.

As my brother says: “It is like shouting at a light and telling it to go on.  You need to go to the switch button.”

I will return to Taiji again in September.  You cannot fight hate with hate, anger with anger.  We need to educate people on the dangers of mercury in dolphin meat and why dolphins in captivity is so wrong.

Please do not support any dolphin shows.  Dolphins in captivity often live a very short life and are not happy.

I had an encounter with a captive dolphin in Taiji Whale Museum that will stay with me for the rest of my life.  As I watched him swim up to me, he started talking to me – it was like a knife had gone through my heart repeatedly.  It was like I felt his pain.