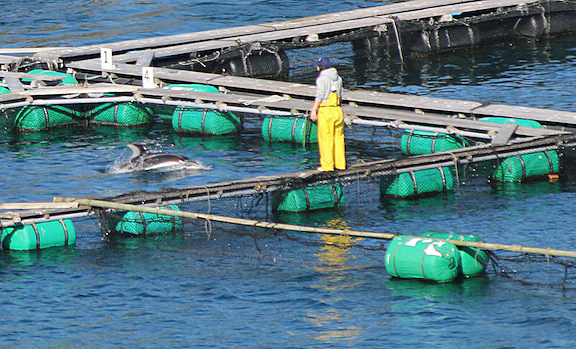 Today, in Taiji, was another harsh reminder of why we must bring an end to the captive dolphin industry.  Early this morning, the dolphin hunters located a pod of dolphins; I could see the drive formation way out on the horizon.  As they came closer to the shores of Taiji, something strange happened.  Instead of driving the dolphins towards the Cove, they were heading towards the harbor.  Also, two banger boats came speeding into the harbor.  I wasn’t sure what was going on.  As the drive formation got closer, I could see the splashes of the frantic Pacific white-sided dolphins.  Soon, I could hear that haunting sound of the fishermen banging on those poles.  They drove the dolphins closer and closer to the harbor.  As the banger boats came near, skiffs drove out to meet them with boats full of nets.  They were going to do an at-sea capture.

Suddenly, the boats turned around and chased after the escaping dolphins.  My spirits lifted as I hoped for an escape, but soon my hopes were dashed as I could see the boats returning, once again, in drive formation.  They had found the pod once more.

They drove them relentlessly towards the harbor, banging on those poles.  My heart sank for these dolphins.  But, again, I saw the boats change directions and head back out after the escaping dolphins!  These dolphins were really putting up a fight!  Sadly, once more, I saw the dreaded drive formation.  Again heartbreak.  However, the number of dolphins they were driving seemed very small.  Most of the pod had escaped.
However, a very large net soon surrounded these unfortunate few.

The skiffs loaded with SCUBA divers floated and waited while the nets were drawn in tighter and tighter around these unfortunate dolphins.  I could see them surface, together – there were three of them.  In a process that lasted for hours, the dolphins were encircled into nets as divers jumped into the water and wrestled those thrashing dolphins into the boats.  As a dolphin was captured and put into the skiff, I could see the dolphin thrashing back and forth in the boat.  A quick trip to the sea pen and then the poor dolphins was dumped into a sea pen.  This process was to be repeated until all three dolphins had been transported to the sea pen in the harbor.

While all this was happening, I could see two dolphin trainers standing on the sides of the sea pen.  In a moment that I will never forget, when the first dolphin was dumped into the sea pen, one of the trainers looked at it and waved as if greeting a new friend.  Obviously, this trainer has no compassion whatsoever for what these dolphins are going through.  I wonder if the trainer really believes the dolphin is going to be happy there and that they will become great friends?  I have to wonder about the mindset of a person who claims to love dolphins yet will stand shoulder to shoulder with the dolphin killers and select some for captivity, knowing that many others will be slaughtered.  I really question how those trainers can believe that it is okay to remove these dolphins from their homes and separate them from their families, to live a life of slavery, entertaining humans.  How is that okay?  These dolphin trainers seem to have no problem with that.  I will never understand that.

Yet, so many young people around the world who love dolphins claim to want to be dolphin trainers.  There is even a Dolphin Trainer Barbie doll, as disturbing as that is.  One example in the media was the young girl who got bit by the dolphin at the feeding pool at SeaWorld who claimed she didn’t blame the dolphin, and she still wanted to be a dolphin trainer.  One of my students told me that she loved dolphins, and she wanted to be a dolphin trainer.  After a long discussion with her, she is now one of the strongest anti-captivity students that I know.

We have to teach our children compassion.  To love an animal does not mean to control an animal.  Let’s teach our children to respect animals, to understand that they are not here for our entertainment.  To love dolphins does not mean to want to touch them, swim with them, or watch them to stupid tricks.  To love dolphins is to respect them for the incredible animals that they are and allow them to live their lives in freedom, in the oceans, the way they are meant to live.  Again, it is up to us.  Teach your children well.