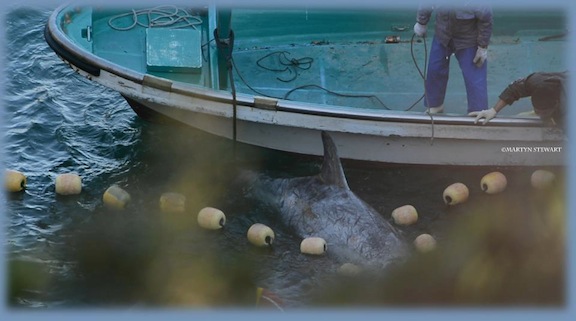 Note:  This is Cynthia’s last blog as she heads out of Taiji for the long trip home to California.  Again, all my thanks to her and the other volunteers who use their own time and money to travel to Taiji to be Cove Monitors for DolphinProject.com’s Campaign.  We really appreciate their sacrifices and dedication!  I’d also like to thank Martyn Stewart, an activist who has been photographing the hunts in Taiji for several years, for use of his photos. – Ric O’Barry

I awoke this morning with a strange feeling – today would be my last full day in Taiji as I leave tomorrow.  As I made the drive out to Taiji, I was really hoping for a good day for the dolphins.  It started as all the other hunting days have, watching the dolphin killers huddle around a fire, warming themselves before heading out on their evil mission, watching them march out to their killing machines, and watching the parade of banger boats leave the harbor as the sun begins to rise.  Just another day in Taiji.

As I waited, watching the horizon, hoping not to see the dreaded drive formation, time passed slowly.  It is really nerve-wracking waiting and wondering what is going to happen.  Eventually, I could see the boats far out on the horizon but coming towards the harbor, not in drive formation.  Although I knew they were still far out, I started to feel a little better about the dolphins’ chances today.  I started to relax a little as I watched the killing machines chug their way towards the harbor.  Then, I saw one of the boats stop and make a turn to the left, and, shortly afterwards, the other boats were heading that direction.  Just like that, my emotions changed from relief to apprehension.  My heart sank as I watched the banger boats race over and take up the dreaded drive formation.

Soon afterwards, they began to drive a very unfortunate pod of dolphins towards the harbor.  I watched as they moved closer and closer.  Hoping against hope that the dolphins would escape.  Finally, I decided it was time to make the drive to the spot with the best view of the killing Cove.  I made that long climb up the stairs to the top of the hill with a very heavy heart, remembering what I had witnessed here just the day before yesterday.  From there, I could see the drive approaching the killing Cove and could hear the relentless banging of the hammers on the banger poles. I could see the frightened, panicked dolphins trying so hard to swim away from the noise, not knowing that they were swimming right where the killers wanted them to.  As they got closer, I could see it was another pod of Risso’s dolphins.  Not again?!

I watched in horror as they pushed the dolphins into the killing cove and netted them off.  This was a larger pod than the last one.  Soon, the skiff with the trainers arrived to see if any of the Risso’s were suitable for a life of captivity.  Again, I could hear the trainers laughing and talking with the killers, working side by side.  Once again, two dolphins were selected for a life of captivity, put in slings, and taken away.  Then, the killers began their evil work.

Using the skiffs to maneuver the dolphins closer and closer to the shallow water, I could see the skiffs run right into the dolphins with no concern whatsoever.  The tarps were pulled over the killing area to hide their dirty work.  Some Risso’s were pulled under the tarps and the thrashing began.  It’s an indescribable feeling, to hear the thrashing in the water and know exactly what is happening to those beautiful animals.

One Risso’s, in particular, had such a will to live!  Trying to escape the killers, it swam into the nets, the killers tried to untangle it, but it was fighting so hard for its right to live.  Finally, they tied its tail to the boat and pulled it towards the tarps.  As it was being pulled, it continued to fight so ferociously for survival, I could hear it’s body slamming into the boat, repeatedly.  A sound I will never forget.  I fought back my tears as I watched this beautiful animal struggle so hard to live.  Unfortunately, a dolphin is no match for these heartless killers.  As they pulled that dolphin under the tarps, the thrashing was louder and longer than I had ever heard.  I knew that dolphin was still fighting to live.  Then, the silence came, and the Cove water began to turn a blood red.  I knew that brave dolphin had finally succumbed to these heartless, dolphin killers.  I could no longer hold back my tears.  I will never forget that courageous dolphin and all the other dolphins of Taiji.

I watched as the bodies of the Risso’s were first loaded onto the skiffs then transferred to a banger boat for transport to the butcher house.  Once again, the killers sat on the tarps that covered the bodies so that the lifeless corpses could not be seen or photographed.

Once again, beautiful Risso’s dolphins, which had just been swimming freely hours ago, had been reduced to limp, lifeless bodies by this handful of men.  Just another day in Taiji.