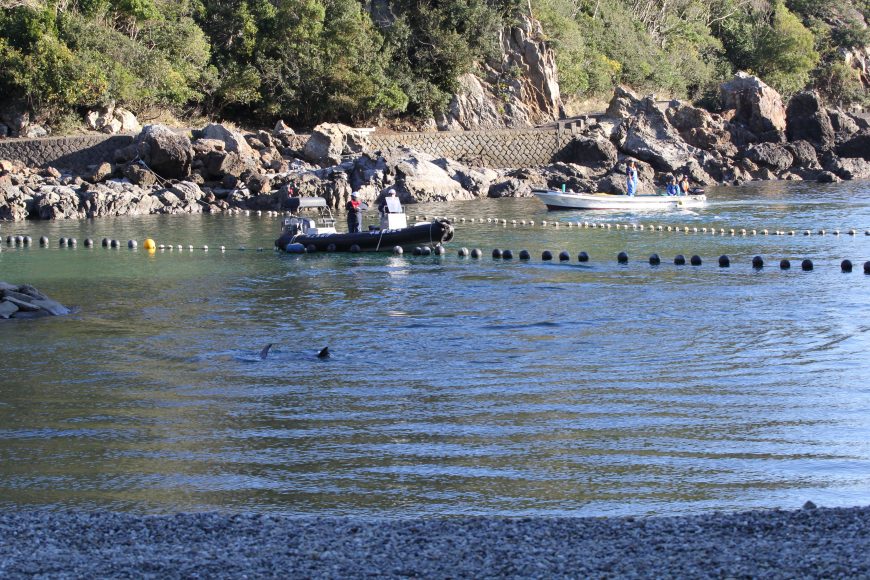 The day started off the same as all days in Taiji. Up at 4:30 a.m., we went to the harbor to see if the boats would go out. And unfortunately they did — the hunt for dolphins would be taking place today. As they were leaving, we could hear one of the fishermen talking through the loudspeaker. This raised a red flag, thinking that other fishermen had radioed information to the dolphin hunters about dolphins in the area.

As every day, the next part of our day consisted of heading up to the lookout point to watch for the boats. Sure enough, it wasn’t long until a formation was spotted. They were moving fast, more so than the usual drives. My fellow Cove Monitor, Vicki and I had to move quickly to the seawall, where one can watch the drive before they reach the Cove. Vicki went down to the Cove while I remained at the seawall. There wasn’t much banging on the banger poles as the dolphins seemed to be quickly moving along the path towards the Cove. It almost seemed as if they knew exactly where they were going, as if they had been there before.

I started to walk towards the Cove. Immediately upon arriving there, I saw a small group of dolphins swim across the nets into the shallows of the Cove! They were swimming so fast. I’ve witnessed many drives but I have never seen anything like this. One stranded on the rocks, two more were right up by the sandy beach. I could see the panic in their eyes. Another two were near the Coast Guard boat, there to protect the dolphin hunters. It was unbelievable. The dolphins were so close, I could have touched them. But, of course, the area was surrounded by police and to touch them or interfere in any way would have landed me in a Japanese prison.

I was overcome with a horrible feeling of hopelessness as I watched the trapped dolphins struggle. Soon came the fishermen in their skiffs, shouting instructions to each other while trying to force the terrified dolphins back to the killing cove. I’d never been so close to the fishermen before.

The fishermen brought two divers over to the lone Risso’s that had stranded on the rocks. My heart broke as I watched them pull the dolphin off the rocks and escort it to it’s death. Soon, all the remaining dolphins were forced into the killing cove where they would meet the same fate.

The first drive was done by about half of the banger boats. I had a bad feeling something else was going on. Shortly after the first group of Risso’s had been herded into the killing cove, I heard that all too familiar banging sound in the distance. Moments later, I could see the boats approaching with another group of dolphins – another pod of Risso’s. I’m not sure if they were part of one pod that had split or if there were two separate pods. All the Risso’s dolphins were killed this day, both large and small. I spotted at least one mother and calf in the group. There might have been more. Vicki and I were heartbroken. We both saw terror and panic in the dolphins’ eyes. I can’t even begin to describe the feelings of helplessness and sadness we experienced. We couldn’t help but wonder if, perhaps, these dolphins had been in the Cove before and had witnessed their family being killed, before being driven back to sea. They seemed to know what awaited them in the killing cove and although they did attempt to bolt, they were unfortunately trapped by the shores of the Cove. This day will be etched in our memories forever.

Please consider making a donation or joining us on the fronlines as a Cove Monitor.