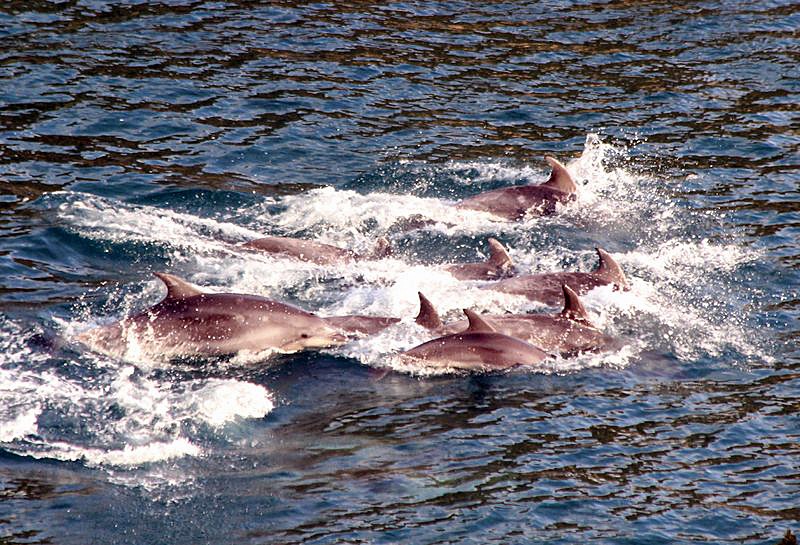 (Our new volunteer Cove Monitor, Rachel Baldwin, has joined our veteran Heather Hill in Taiji.  Here they both report on the latest slaughter of dolphins.  My thanks to both of them for being there to help us let the world know what is going on in Japan.  – Ric O’Barry)

I woke up to a beautiful day.  The sunrise was unparallel by any other I’ve seen.  Oranges and pinks striped the sky contrasting against a glassy cobalt blue ocean.

The horizon was speckled by banger boats and skiffs that were manned by anywhere from two to five men.  I sat nestled in the jagged cliffs listening to the waves crash below me as the boats pulled into the Cove.  Even the birds knew what was about to happen.  As soon as the boats were pulling in, the noise the birds were making was overwhelming.  Eleven boats zoomed over the horizon all at once, all turning right at the same time as if it were a choreographed dance.  There had to be something important in the water, something important enough to kill for.

The men had all seen the same pod of dolphins.  There was a sort of unspoken communication; they all knew what they had to do.  They were murderers dressed as fishermen.  They surrounded the dolphins and corralled them, driving them into the killing Cove.

It was an unfair fight: 50-60 men armed with noisy boats against 13 bottlenose dolphins armed with nothing.  The men used metal tubes submerged within the ocean to create a wall of noise to move the dolphins to shore.  This noise seems like nothing to us, but to a dolphin, whose life is so strongly influenced by the sounds of the ocean, it’s like metal on metal, something anyone would want to avoid, man or fish.

As if this noise torture wasn’t already bad enough, it was now time for the trainers to come look at the dolphins.  They were there to pick the few lucky dolphins, if you can even call them that, that would be bought and taken to nearby aquariums.  Of the 13 dolphins, only 3 were selected for captivity.  The remaining 10 were encircled by skiffs, revving their engines and throwing tarps over the netted areas.

Why would these men be trying so hard to hide something if it wasn’t inherently bad?  The men lit a bonfire on the beach, yet another distraction, and an eerie calm came over the Cove.  As the skiffs drove away my eyes were drawn to the ten dolphin tails all tied up together under the tarps, but one thing caught my attention: the laughter of the dolphin hunters.

As we drove past the harbor this morning, we noticed something unusual; beside the banger boats stood a crowd of people, a mixture of police and journalists.  The journalists were waiting, just like us, to see if the boats would go out in search of dolphins, and if so, to document the hunt.

The weather proved in favor of the hunters today, and, as I scanned the horizon, I saw my worst reoccurring nightmare – the banger boats were gathering in formation on the horizon. A pod of bottlenose dolphins had been located.

We hiked up Takababe Hill, which overlooks the killing Cove, for the second day in a row to watch it all unfold.  Something was different about today though.  Amongst the activists and police stood a news crew from Australia’s 9 News.  They set up their massive cameras in the few spots to view the Cove and their booms extended well out into the trees to capture the sounds from below.  As the hunters were driving the dolphins under the tarps and out of sight to conceal the capture selection and slaughter, the news crew launched a camera-equipped flying drone over the trees and down into the Cove.  The police were frantically making phone calls, looking through documents, and insisting that it was not allowed.  The fishermen, when they finally noticed the little drone buzzing around, were furious and completely caught off guard by their unwelcomed visitor.  The news crew was focused only on their mission of capturing footage, and I couldn’t stop smiling.

A skiff loaded with dead dolphins heads out of the Cove to the slaughterhouse in Taiji Harbor.  Photo by Heather Hill.

Media coverage has been widespread since January’s drive hunt of 250 bottlenose dolphins, which sparked US Ambassador Caroline Kennedy to tweet her concern about the hunts, stating they are inhumane and that US government opposes this practice.

I have seen my fair share of newspaper reporters at the Cove, but I personally have never seen anything like what I witnessed today.  It gave me a renewed sense of hope that this is indeed the turning point.  The world is taking notice.  We are watching, speaking out against it, and together we will end this.

Contact the World Association of Zoos and Aquariums (WAZA) to urge them to be responsible and take action against their members that source dolphins from Taiji and other wild dolphin capture sites (like Russia and Cuba).

Sign the Petition to Support our Japanese Colleagues call for WAZA to take action to stop the dolphin captures and hunts!