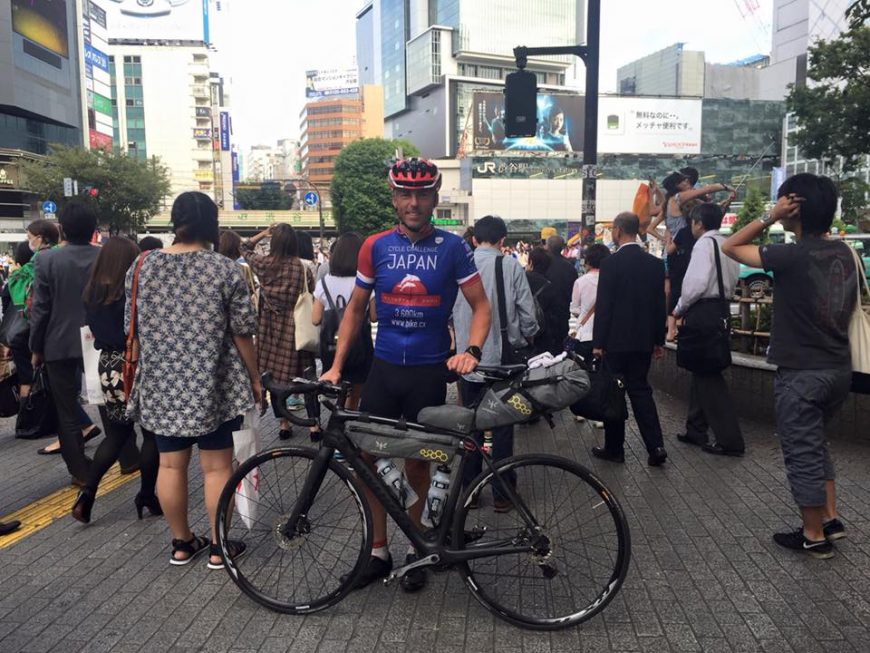 After four weeks of traversing the hazardous tunnels and precarious roads of Japan, Ollie Blackmore did it, he cycled the length of the country for dolphins, and he did it completely solo and unsupported. Beginning in Nagasaki, Blackmore reached Tokyo on September 29, where he met up with his beautiful girlfriend and now fiancée, Kate Lawrence.

“I haven’t cycled in nearly two weeks,” Ollie told me, although he hopes to get back on his bike this weekend. Who can blame him, he did hit more than his fair share of tough spots long the way. The largest of which, he said, was crashing the bike into some metal on a main road.

“I nearly came off into oncoming traffic, no idea how I didn’t! At first I thought I’d just punctured the front tyre but turns out I’d smashed the front and rear wheels and torn a hole in the back tyre.” Having a specialist size wheel hub, Blackmore was at a loss as to how to get the problem fixed — even finding the right parts would prove a challenge. But find them he did, and he even got the problem fixed … until his chain came off into the wheel while going up a 20% gradient hill.

“The shop that fitted them didn’t adjust the gears properly,” Ollie said, “and as a result of the width difference, the spokes broke, which meant even more repairs denting my progress.”

As for the weather, after enduring three solid days of typhoon rain and wind, waterlogged was an understatement. “So much water got into everything, my phone got wrecked, my GPS tracker, my lights, camera; it was all soaked Some things never worked again, I was glad when the sun came out again!” Ensnared by traffic lights, closed roads, tolls roads and expressways that didn’t allow bicycles, Ollie had to adapt his route constantly. His planned trail, a total distance of 3,600 km, flew out of the window. “The total ended up being 3,242 km,” he said.

Still, he averaged 100 miles a day, with his best day topping out at 140 miles, so the cyclist took an extra day off his bike to take aid to the Fukushima disaster victims in Minamisoma.

So what will Ollie remember the most?

“How nice the Japanese people were to me, those I spoke to about my challenge didn’t agree with what happens in Taiji, but are afraid to speak out. It’s such a culture shock in that respect. Takayo, who arranged the visit to Minamisoma asked me why there are so many activists in the UK. I couldn’t think at first, but it didn’t take me long to realise why. We have no repercussions for speaking out in the UK, or many places in the world. In Japan, people receive threats, are harassed and ostracised for standing out. It’s very difficult for people who oppose dolphin hunts to gather support, even though many people think it’s cruel. Spending a day with Ric, Terran and Tim was amazing too. Surreal being at the cove in Taiji, these guys do such amazing work, I’m glad to be part of such an awesome team.” When Ollie hit Tokyo — safe and sound, it was a relief to everyone who had followed his journey. Let’s face it, he had time with Ric and the Dolphin Project team in Taiji at the cove, and with Takayo san at Minamisoma, but outside of that, he was stone cold solo in a strange country. The language barrier was tough, and the relationship with authorities have not been the best this year.

Although support was thousands of miles away — it was still forthcoming — from family and close friends, and even strangers he had never met.

“I’d like to thank my fiancée Kate,” Ollie said, “she has stuck by me throughout all of my challenges.  Her support and encouragement has really kept me going. Huge thanks to Kassei.cc for kit, Streetlife Cycles for advice and support with the bike, my team at Selesti and all of my family and friends cheering me on.  I also want to thank everyone who has connected with what I’m doing and who donated too.  The response has been overwhelming, in such a positive way.”

The entire journey was an astonishing feat for Ollie. It was only his third cycle challenge — for charity, to date. There was a wonderful prize awaiting him in Tokyo, his then girlfriend Kate, whom he proposed to in Japan.

The proposal was supposed to happen back home in the UK, but, “the logistics of finding a ring so close to my challenge meant I didn’t get time,” Ollie said. “Every day on the ride I thought about proposing more and more, I bought the ring in Sendai, and carried it in tons of padding to Tokyo.”

After 4 weeks, I couldn’t wait to see @katejlawrence1! Finally spotted her in the busiest intersection in the world, couldn’t miss the #dolphin! What an adventure it’s been!! #cyclechallengejapan

Despite the long bike ride, Ollie assures me he isn’t done. “The challenge was just the beginning,” he said, “I have been so inspired and motivated to do more.”

And on Oct. 16, he reunited with Ric O’Barry at the massive protest in London where he gave a speech alongside other notable speakers, including Ric.

I’ve also made connections with the British Embassy in Tokyo, the government in the UK and I’m reaching out to other organisations too, to gain support and explore as many channels to campaign through,” he explained. “I’ll be heading to Japan again to cove monitor for sure, and doing more challenges too, my aim is to raise as much awareness as I can, and educate people about change. — Ollie Blackmore.

Our respect for Ollie’s passion and accomplishments is infinite. He has helped educate the people of Japan and thanks to his blogs, we have heard how the fear of retaliation still keeps Japanese people from speaking out. His grand adventure also netted well over $6,000 for Ric O’Barry’s Dolphin Project, and he did it all with a smile on his face.

“I’m in this for the long-haul,” Ollie said.

We couldn’t be more pleased. Thank you Ollie, and welcome to the family!