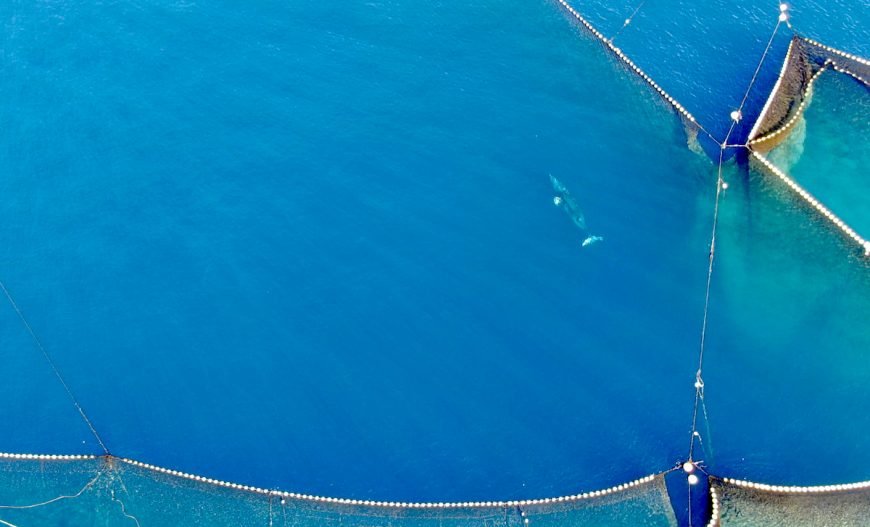 UPDATED 1/11/21: Dolphin Project can confirm that the minke whale, after being trapped for over two weeks in Taiji’s fishing nets, has been killed.

TAIJI, 12-29-20: On December 25, Ren Yabuki, Campaign Director of Life Investigation Agency, in collaboration with Dolphin Project, documented a minke whale which had become trapped in Taiji’s fishing nets. The offshore nets (referred to as “set nets”) owned by the Taiji Fisheries Cooperative, are in place year-round just outside the Taiji harbor, adjacent to the infamous Cove.

Several different species of fish are caught within the nets; rarely dolphins and other whales become trapped in them, unable to escape. Most recently, a humpback whale got caught in the nets, however, one day later on November 30 it was released. At the time of this writing, five days after our first documentation, the minke whale is still swimming within the fishing nets, with no attempts made to release it.

“Despite Japan being a whaling nation, it’s unjustifiable by anyone’s standards to make an animal suffer in such a cruel manner. The Taiji Fisheries Cooperative’s indifference to this animal’s suffering is shocking.” ~ Ren Yabuki, Life Investigation Agency

When Ren first contacted the Taiji Fisheries Cooperative, inquiring whether plans were in place to release the whale, he was unable to get confirmation on what action(s) they were willing to take. He made another appeal and at that time, was physically assaulted. An investigation into this assault is ongoing.

The situation has become dire. In the most recent drone footage, the whale is seen repeatedly charging the net, along with deep diving, likely in attempts to escape.

“It’s highly likely that if the minke whale is not released by end-of-day on December 29 (local time), the animal will die, as the Taiji Fisheries Cooperative isn’t back to work until Jan 5, 2021.” ~ Tim Burns, Dolphin Project Cove Monitor

HOW YOU CAN HELP: