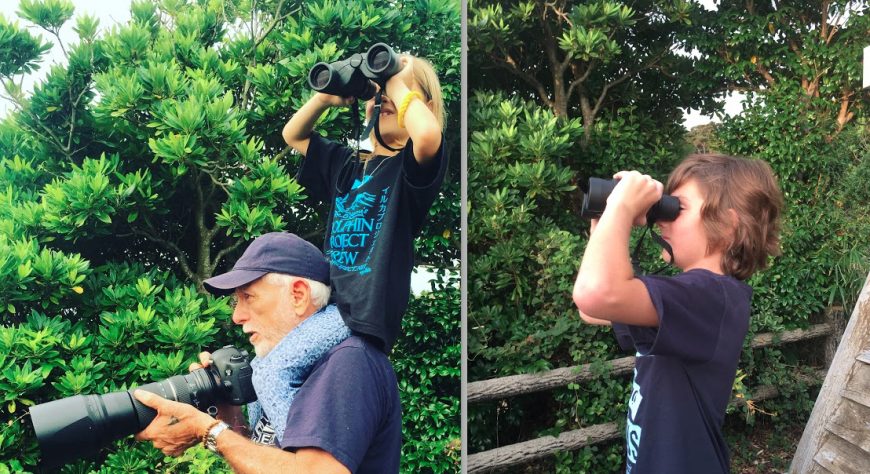 After two days of being stuck in the harbor due to inclement weather, the dolphin hunters went out on the next, two days in search of dolphins to kill and imprison. Our mini cove monitors, along with Ric O’Barry and other Dolphin Project cove monitors were there to document it all.

The smiles on our faces told the story: Four blue cove days in a row!

Mini monitor Ashley, as well as my own kids, Charlie and Imogen, arrived from Phuket. It’s one thing knowing what happens here, based on what I have shared. But it’s another thing entirely actually being on the ground, arriving to the harbor in the early hours of the morning to see if the boats go out. And then, there’s the awful wait, something which takes much empathy, compassion and bravery to handle. This – and much, much more – was demonstrated by the children.

We visited Angel and Mole, who were clearly bored and not interactive. This proved to be a very emotional experience for Charlie and Imogen, having seen the videos from my past visits here. Their reaction to the tank and water struck a chord in me, with Imogen exploding: “Oh my goodness, mom! Their tank is so dirty and so small! The poor things!”

Ashley was hit even harder, becoming quite tearful. We watched the bottlenose dolphin in the front pool who does the shows, playing robotically with a dead fish for extended periods of time. It was excruciating and gut wrenching to witness.

I am very proud of these three little people. They are the voices of the future, their hearts dedicated to Ric and the Dolphin Project. We have but one day left here, but with each visit, different learning experiences are presented. We take these experiences back home with us, and draw upon them during the dolphin advocacy work we do year-round. Without a doubt, our mini cove monitors bring life and lightness to a place known for its misery and cruelty. “This is my second stint as a mini cove monitor and I feel it is a completely different experience coming back to Taiji again. I found it harder to keep myself from crying. Meeting Ric is amazing. He is really good with kids and is so nice. He has been teaching us a lot about Taiji and the culture, and why they are still hunting dolphins. He explained everything to us, even when he was arrested and came back, he told us everything, and speaks to us like people not just like kids. I felt it was so unfair when Ric was arrested. I was so tired and overwhelmed by all the media and police. Taiji Whale Museum was very sad, the dolphins are getting crazier and it really hurt my heart. I had to come and get hugs from Vicki. We have had four Blue Cove days and that is awesome. I am glad I came back and got to learn from Ric, He is inspiring and epic!” “It’s my first time in Japan. Meeting Uncle Ric was really nice. He spends a lot of time with me, and he carries me on his shoulders. I tell him jokes, and he laughs. I felt bad when he went to jail, and I was scared for him. Uncle Ric taught me a lot about Japan. I ran downstairs so fast when I heard he was out of jail to give him a hug, and ran back up to get Mommy. We made him prayer sticks in the temple and I wrote his name on it with a heart. Waking up early is hard, but its okay. Our hotel is like camping as we sleep on the floor all together in one, big room. Being with the pod is a lot of fun. I want to come back to Japan and be a mini cove monitor again with my mom. I want to save dolphins.” “I like being in Japan. It is so different to everywhere else I have been. I am learning some Japanese words which is cool. Meeting Uncle Ric was so good. We drive everywhere with him in the car, and he tells us lots of stories. He knows a lot. He even laughs at our jokes. The Japanese people are nice, but some weren’t nice to Ric, I don’t like that part. I love the Blue Cove days. There are fish in the sea, near our hotel that are so cool – puffer fish and bright, blue fish. I really like helping my mom as a mini cove monitor and I want to come back with her. It’s fun being with the pod, and everyone is so nice to me.”

Dolphin Project Cove Monitors are on the ground in Taiji throughout the entire killing season to document and disseminate information to the rest of the world. O’Barry has been traveling to the cove for the past 13 years, multiple times per season. Please consider joining our team as a Cove Monitor, or learn how you can support our mission.