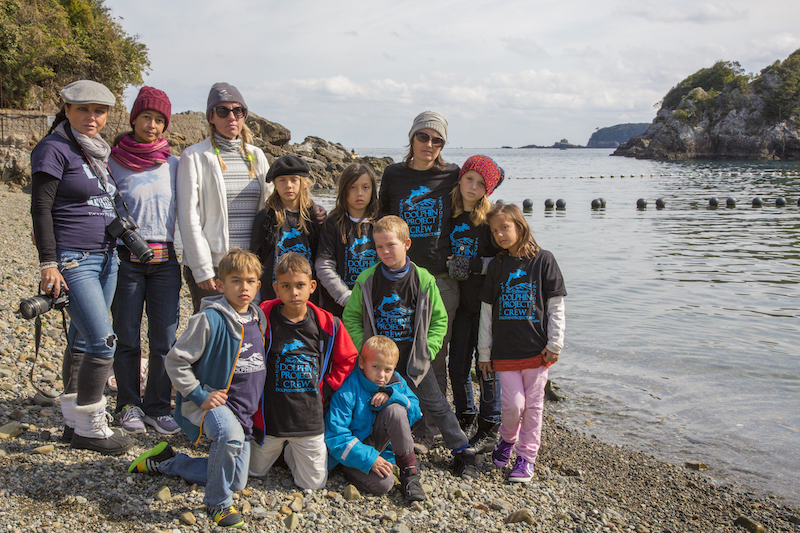 On November 4th, the Dolphin Project will once again welcome our Mini Monitors back to Taiji, Japan. It will be the third time that children from Phuket in Thailand will represent our team under the careful watch of Cove Monitor Vicki Kiely. For Kiely, this her fifth tour in Taiji and she can’t seem to stay away. As other monitors before her have stated, it’s a town of contradictions that bores into the soul. The eight children from Gecko Community in Phuket will join Kiely on November 3rd and leave on the ninth.

I am so happy to be with the Mini Monitors for a third stint. Having them there is a breath of fresh air … even the locals and the police say so and notice it. People can’t help but smile and respond to the kids. I know this is provoking change there. The youth are the future, we always say that, and it sounds almost a touch cliché now, but it is the truth — Vicki Kiely.

The Mini Monitors will shadow everything that the grownups do. Kiely will teach them how to count the number of boats going out in the morning, how to spot them when they return and what an actual drive process looks like.

They will get up at 4 a.m. and do it all as we do, post to social media, count the pods when they come in, estimate numbers and determine species — Vicki Kiely. Last September, Kiely’s own children were directly mentored by Dolphin Project’s founder and director Ric O’Barry. “It was a very touching and powerful time in my life,” Kiely said, “seeing the bond he makes with children and adults alike.”

To Kiely’s own daughter, Imogen, “Uncle Ric is magic.”

We hope our supporters will give these eight children the best of welcomes. They are:

Three of them explained why they were going to the cove.

until I learned about Captivity and Taiji. I have learned the pain and how ones could be suffered from being locked in small space and I feel for the beautiful creature. Not to mentioned being killed cruelly. I want to be a part of Cove monitoring to make a different and be a voice for the dolphins as they cant speak for themselves. I believe one day the slaughter will eventually stop.

I am 10 years old I come from Sweden but I live in Phuket. I am doing this because I think dolphins are beautiful and I love seeing them in the wild. But looking at them in tanks and knowing that they are depressed is just not right. I want to help the dolphins as much as I can but when this slaughter is going on it makes me wanna cry.

My name is Eddie. I come from Sweden, but I live in Phuket. I’m 13 years old. I’m doing this because I want to make a difference and save dolphins from going extinct.

Please understand that these youngsters will be monitoring our social media sites and so we ask that you be sensitive with your comments.

Kiely says that kids get it, better than most adults actually. “If you are honest with children they are not numb, they want to fight injustice. It is adults that are numb.”

This is why she is delighted to be a part of the Dolphin Project’s Mini Cove Monitor program and why it’s going to be expanded to invite children from anywhere in the world.

If your school or child wants to come to Taiji, and this is something you support and you need to fundraise, then please get in touch with us at Dolphin Project. I will be doing more stints this hunting season offering the Mini Cove Monitor Training Program, so please kids, come and use your voices — Vicki Kiely.

This is another exciting step forward for Dolphin Project, and it continues on November 4th. We can’t wait to see these kids in action and learn about their own personal evolution at the cove.

“They are brave and brilliant,” Kiely concluded.

Interested in becoming a Cove Monitor for the Dolphin Project? Learn more about what it takes.