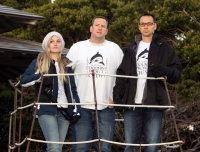 From time to time, I’ve mentioned here incidents of individuals in Japan who love wild dolphins as much as we do and who have taken action to help protect dolphins, such as my friend Mr. Ishi, who swore off killing dolphins and now runs whale- and dolphin-watching cruises from his boat in Futo.

On my recent trip to Japan this past summer, I visited a whole island full of Japanese people who love and cherish wild dolphins.  It was such a contrast from Taiji and other whaling towns in Japan.

The big lie by the Japan Fisheries Agency (among many) is that whale and dolphin meat are an integral part of Japan’s food culture.  Actually, this is only true for a very small minority of people.  Few Japanese eat whale meat or want to eat whale meat.  Even fewer Japanese know that dolphins are being slaughtered for food in their beautiful country.  Most Japanese enjoy dolphins.

Here on Mikura Island, a 7-hour ferry trip from Tokyo, local Japanese not only care about wild dolphins, several enterprising ladies have set up a company to bring Japanese to swim with a wild pod of bottlenose dolphins.  The dolphins are free to come and go as they please – we are not their masters, but their guests in the ocean.

It is an amazing fact that in several places around the world, dolphins and whales have become “friendly” with humans and will play and swim with them.  Like I said, it is an amazing contrast with Taiji.  (Furthermore, if we are successful in shutting down the hunts, Taiji could conceivably become a place where people and dolphins are friendly.)

All the dolphins have names and distinct personalities. They also have the love and respect of the local people – and wonderful people they are.  And best of all, they actually like me, even the police chief and his lovely wife insisted on taking a photo together.

Wow!  Talk about a sharp contrast from Taiji.

In part I was here to scout out the place, which my friend CW Nichols suggested he and I visit with attendant Japanese media later this year.  Mikura Island shows the positive side of the dolphin story in Japan, and it is important that the Japanese people hear that story too.  They certainly won’t get it from the corrupt Japan Fisheries Agency!

But I also was following a dream:  Could we get the Taiji Four out of the Sahara Desert and back home to Japan?  You might remember these four bottlenose dolphins that were captured in Taiji and shipped to a swimming pool in a private villa in Hurghada, Egypt.

My son Lincoln and I went to Egypt in an attempt to rescue them.  We did the best we could under extremely difficult circumstances, and then had to return to our unfinished work in Indonesia.

The four victim dolphins were eventually transferred from the small swimming pool to a hole in the ground in the Sahara Desert.  The owner installed bleachers and calls it a dolphinarium.  That’s where the dolphins languish today.

Our dream is to get them out of the desert and back to Japan.  Not an easy task, but a dream worth chasing.

In the meantime, our planning and Campaign goes on to Save Japan Dolphins. I will be in Taiji again on Sept. 1st, and I plan to bring up the contrast between Mikura Island and the treatment dolphins get in Taiji.  Mikura Island is the future for Japan and dolphins.

You have been a supporter of ours for a long time, and we are grateful to you for your continuing support and dedication.  I left Japan feeling we can make progress, if we keep our dreams going and our hopes high.

Thank you all for all you are doing for the dolphins!