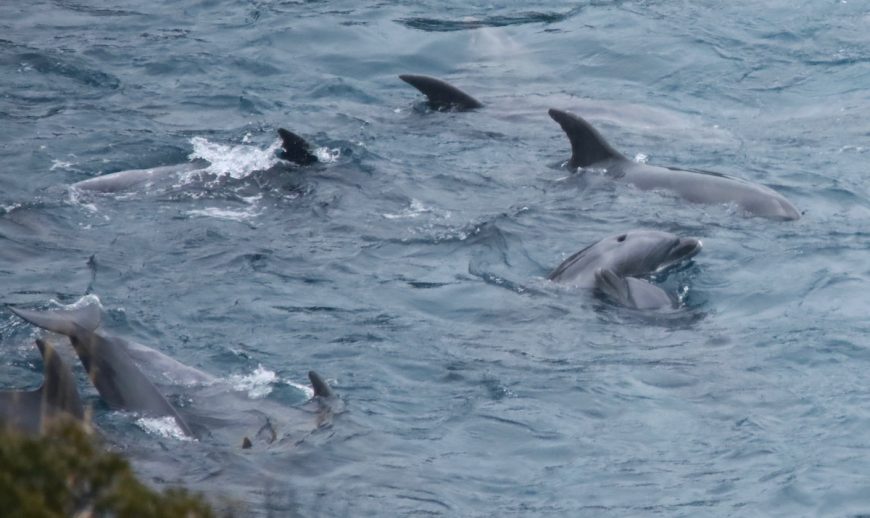 Taiji, 1-20-17: Rain beat down in the early hours of the morning, and we were hopeful the dolphin hunters would be kept away from the open water – and unsuspecting dolphin pods. We were mistaken.

Three hours after they left harbor, around 9:50 a.m., 11 banger boats began driving in a massive pod of bottlenose dolphins. It didn’t take long for the mammals to be netted into the cove, and many juveniles and babies were spotted amongst the 250+ group. We suspect the hunters were tipped off, for while visibility was poor, they were able to spot the dolphins, and drive them in with relative ease.

The pod was clearly terrified. Most stayed in a semi-circle and remained like this for hours.

I could see them spy-hopping, dolphins laying backward, dolphins on top of dolphins (layers of dolphins in the cove), babies and juveniles with adults.” ~ Terran Vincent Baylor, Dolphin Project Cove Monitor

Two nets were now in place to prevent the dolphins from escaping. Then, the unthinkable happened: The skiffs left, the coast guard left and, after an hour of waiting for someone to return, we realized the dolphins would be held, suffering, overnight.

Gray is the new green: it’s the color of money in the dolphin slave-trade

When hunters and trainers return to the cove (possibly tomorrow, however, we’re not certain as Saturdays are usually a day off), the captive selection process will begin. And each of these beautiful, gray bodies will be slapped with a price tag: upwards of $155K USD for a captive dolphin, and “mere” hundreds for a slaughtered animal. It’s clear that the big bucks are to be made from the dolphin slave-trade.