Marineland: One for the History Books 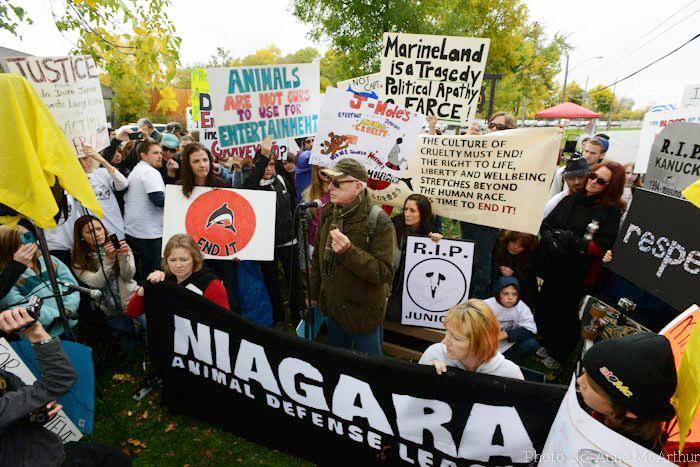 What happened at Marineland in Canada this past Sunday was powerful! That`s putting it lightly.

I arrived early, sometime around 11AM.  Before noon, there was a steady stream of demonstrators – over 200 showed up before the official start.  The crowd kept growing, reaching between 600-800.  That many people create an electric unity.  Add amazing musical guests, speakers and performers, and you’ve got magic!

As the crowds rolled in, we heard from musical guests like Heather Janssen and Ariana Gillis:

A couple years ago, Ariana wrote a song titled The Cove, which she performed for the crowd, appealing to them to join in on the chorus.  She cut through the masses, empowering us.  It was obvious this demonstration against Marineland was going to be unlike any other we’ve had this year.

From the New Democratic Party, Member of Provincial Parliament Cheri DiNovo addressed the crowd and gave us a glimpse of the finish line – the goal of ending Marineland’s exploitation of living animals.  It is within reach.  This Parliament member will be our champion.  Ric O’Barry has said numerous times that this campaign needs a champion.  Well, my fellow Canadians and those of you who support us from abroad, THIS woman is she, and she won’t stop until the job is done!

“So the one thing I want to give you is a little bit of hope…actually a lot of hope.  I’ve been doing politics for a while now, and I can kind of sense when we’re going to win something.  I mean I think all social justice will one day win – the only question is when.” – Cheri DiNovo

Cheri gave us hope, and ex-trainer Phil Demers gave us his heart and his tears and his plea.

“She was on the brink of death the last time I saw her (Smooshi, a captive walrus at Marineland who stole Phil’s heart).  Marineland had promised me that they were not going to let her die, that they were gonna call me…they were gonna let me go in there to save her.  And I got in one day and saw her, and she’s in no shape.  That’s when I knew they weren’t going to hold up their end of the bargain.  That animal WILL die if she’s not already dead.  And she’s the one that lies in my (choking on tears, he pauses)… She’s the one that I think about.” – Phil Demers

It was shortly after this moment, but not necessarily because of this moment, that a crowd of more than 100 people began heading for the gates of the park.  It happened slowly.  They stood for a while just within the gates, and once they realized they were open, free to go – they stormed in, effectively shutting down the dolphin show and sending owner, John Holer, speed walking to his truck.  There’s been much controversy surrounding this moment.  The truth is whether you agree or disagree, the issues for the animals still need a solution.  And I can tell you first hand, that these people were unified and outraged and enough was enough, and I felt their anger, and I respect it.  It was NOT a planned part of the schedule, but it happened and it was powerful.

The crowd was eventually dispersed and returned to their space behind the ‘boundaries’ of Marineland property.  All was calm, and within moments, completely uplifting, as former ex-pre-show entertainer, ‘Spandy Andy’, infected the crowd with dance.  It was ‘Light and Bright’, as he often says.

The unity and liveliness within the crowd continued to grow, as we banded together and sang along with singer Meghan Connolly.  Her song, Call of the Wild, was originally released by a student environmental club, called Sonar 2 Voice, at Christ The King High School, Georgetown Ontario, in 2010.  The song is the group’s first benefit song.

Lastly, Ric O’Barry addressed the crowd and really had them “fluke slapping”!

“You all know why we’re here.” he began, to roars in the crowd. He spoke fondly of Duke, a dolphin at Marineland in the 90’s who desperately needed to be moved for rehabilitation or risk dying.  The owner of Marineland refused, and Duke died somewhere between 1993 and ‘94.  (Phil Demers’ case with Smooshi (2012) seems all too familiar.  He adds that Smooshi could go back to Russia, be rehabilitated and released into the wild.)  Ric continues to encourage us to KEEP up the pressure on Marineland.  The doors of this marine park are closed for the season and scheduled to re-open in May.  Staff is now cut in half – in half!  This means less staff to care for these animals.

“The important thing is to keep this issue alive after tomorrow…,” Ric added.

This is the MOST important thing.  We are on the brink of winning the battle.

Sign the petition on change.org. (Cheri DiNovo has promised to deliver this petition, weekly, as numbers continue to increase.  It has just over 81,000 signatures now.)

We CAN and we WILL succeed!!!

Recently, a friend of mine went on a whale watch cruise. For months, she had looked forward to the prospect of seeing
read more