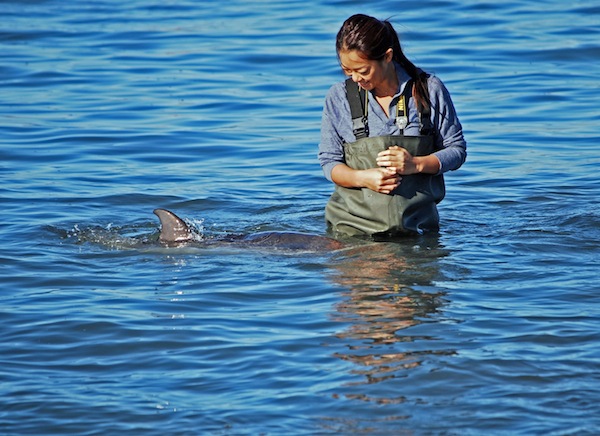 UPDATE: Today, the dolphin hunters have taken the day off, and there were no dolphins killed in Taiji.  Sadly, yesterday (Friday), 30-40 striped dolphins, the same species as little Marcos, were slaughtered for their meat in the Cove.  Thanks to Sakura for her reports to us!

While I was in Spain two months ago helping the grassroots group PROMAR care for little Marcos, the baby striped dolphin that lost its pod, and plan for Marcos’s future, our Cove Captain, Sakura Araki was in Europe at the same time.  I invited her down to Almeria to see Marcos and the efforts being made by PROMAR to save him and return him to the ocean.

I asked Sakura about how she felt about the Marcos effort, having been with me in Taiji during some of the intense dolphin hunts.

“Marcos is soooo cute – such a baby boy!” Sakura told me enthusiastically.  “I felt he was like my nephew!  I could see that dolphins are really the same as humans, as I could feel when he was sad and lonely and when he was happy.”

“You see,” Sakura explained, “when he was so happy, he was palling around with us, but when he felt sad and lonely, his eyes were so sad.  I think he really wants to see his real family or at least some of the same dolphins.”
Here’s a nice video of Marcos in action.  (The white cream is sunblock to protect him from sunburn, something captive dolphins are prone to as they spend so much time on the surface instead of diving.)

Sakura was very impressed by the PROMAR volunteers, as well.

“I was very happy to meet all the PROMAR people,” Sakura said.  “Everybody has a job and/or is going to school.  They don’t have a lot of time, but they care about Marcos so much!  Everybody makes time for Marcos so they can work with him and exercise him so he doesn’t get bored and depressed.  I really want a lot of people who care about Taiji dolphins to help Marcos and PROMAR as well.”

Like many people we meet in Japan, Sakura is very concerned and disappointed with the dolphin hunts in Taiji.  “I really can’t believe that in a couple of days the Taiji hunters caught more than one hundred bottlenose dolphins!  And meanwhile,  PROMAR working so hard for one baby dolphin to get back his family on this planet!  How soooooo different?  I really don’t understand!”

Sakura added:  “I’m so ashamed Taiji fishermen are still killing and hunting for dolphins!  I don’t feel that the Taiji fishermen represent the Japanese.  It is so embarrassing!”

I asked Sakura what she would like to tell the Japanese people about Marcos and Taiji?

“I want to tell them that Marcos and dolphins are not for food and our pleasure!” replied Sakura.  “They are animals that belong to nature and the planet.  If you want to see dolphins, you should go to the ocean, not a dolphin aquarium.  Dolphins don’t eat dead fish!  PROMAR is trying to help Marcos get back to his family because it is normal to spend time with family just like us!”

“I really want to STOP the Taiji dolphin hunting!” Sakura added.   “The hunts are not traditional; they are hiding everything!  It is not normal to kill dolphins like that, and they should not separate dolphin groups and families like they do in the drive hunts.”

“If Marcos could get back with his family and if the Taiji fishermen caught Marcos and his family, I can say he is my friend!  You know!  I would be really mad!  If someone tries to kill your dogs and cats!, what would you do?  That is the same!  Marcos is our friend!  We care about Marcos sooooo much.  The Taiji fishermen should not be catching dolphins like Marcos.

“I really want to tell the Taiji fishermen about the PROMAR people in Spain helping one baby dolphin on the same planet!”

“If they are still human beings, they can listen to our voice, and they can stop killing and can stop separating dolphin families.”

“A lot of people in this world hate Taiji fishermen so much, but they are still humans with families of their own, so I really want them to change!  Let us wish and hope that they will stop dolphin hunting as soon as they can!”

I’m pleased to say that Sakura is now back in Taiji helping expose the dolphin hunts to the world.