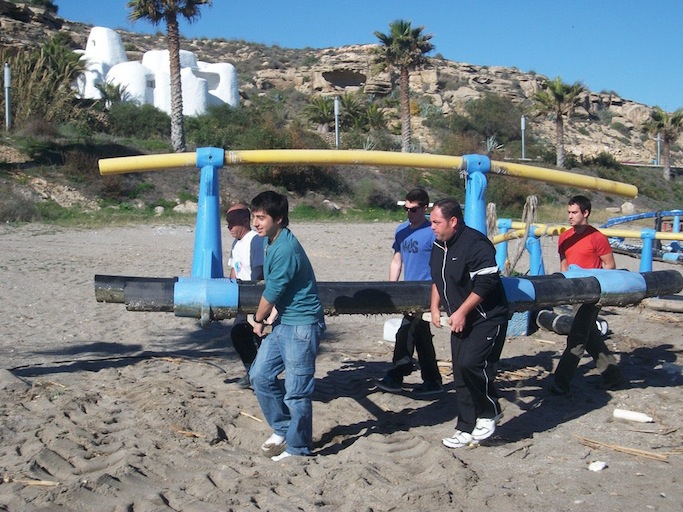 Marcos, the little striped dolphin who lost his pod and wound up under the care of PROMAR, a grassroots stranding organization based in the south of Spain, is getting stronger and healthier.

But as I noted in my previous blog, his sea pen is small and shallow and is located in a harbor area near boat traffic and pollution.  He needs a bigger sea pen, to get stronger, and away from the noise of passing boats.
Given the exposure of the coast here, the sea pen will also need to be tied down to resist storm waves.

I spent several weeks in Almerimar, Spain, consulting with PROMAR and helping their volunteer work with Marcos.

One of the immediate needs I saw was the lack of waders.  Many of the volunteers have wetsuits that they can put on to get into the water to feed and exercise Marcos, but a much easier way to go is to slip on a pair of rubber waders.  Marcos likes the waders too, as the rubber feels like a dolphin’s skin, and Marcos loves to rub against the sides of your legs as you are wading about in his shallow sea pen.  PROMAR had only two pairs of waders for all the staff, so Dolphin Project bought them four more pairs for their use.

A deeper sea pen being needed in a new location away from the harbor.  I am grateful to all the support we have received at Dolphin Project for our work to protect dolphins.  Your donations are going to a very worthy cause in helping Marcos and PROMAR out.  PROMAR is using mostly volunteer labor to build the sea pen, and much of the materials are being donated.

Marcos is doing well, and his new and improved sea pen is taking shape.

I hope to return to Spain to help after the holidays.  I know Marcos is in great hands from the dedicated volunteers of PROMAR.