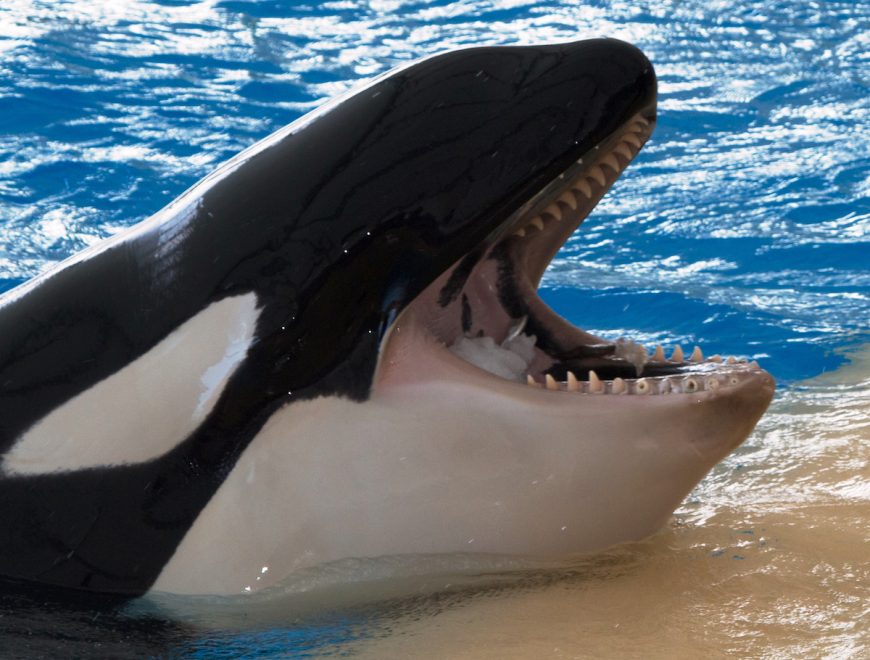 On a hot, sunny afternoon, the orcas at Loro Parque in Tenerife, Spain, were working through the third killer whale spectacle that day. Holiday makers were seeking fun ways to pass their time. Packing the show stadium to watch orcas jump and dance while ear-deafening pop music filled the air fit the bill. Fifteen-year-old Skyla followed her trainer’s command and spun around in the water. As she kept spinning, the music grew louder, as did the spectators’ applause. As soon as Skyla had completed the task, she rushed to her trainer, eager to receive her reward. About half her body came out of the water, and with her mouth wide open, she made it obvious that she was hungry. The trainer grabbed a handful of fish from a bucket and tossed it into her mouth, the way she has been fed every day here since she was taken from her mother at a United States SeaWorld location and sent to Loro Parque at just two years old. The scene of her begging for a handout will stick with me forever.

This is how trainers let the orcas know they did a good job and performed the trick correctly. Trainers at dolphinariums like to refer to this reward system as “positive reward,” but “food control” would be a much more accurate description. One of the most powerful, gregarious, and intelligent beings on the planet has to surrender to begging for food from humans who take advantage of the orcas’ hunger to shape their behaviors to amuse crowds of spectators. If captive orcas did not depend completely on humans for food, there is no way they could be trained to perform the various stunts that attract the huge paying audiences.

Making orcas perform shows by exploiting their fundamental need to eat is, in my opinion, highly manipulative and unethical. No dolphinarium administrator would ever admit that trainers enjoy a superior role in their relationship with the orcas. To conceal the unfairness, dolphinariums must give it a positive spin and make it appear as if the orcas enjoy and even benefit from being hand-fed. Loro Parque is a good example of how far a captive dolphin facility will go in its attempt to sugarcoat reality. It has produced a promotional video, titled Family of Orcas, dedicated to this very topic. The video, which is posted on YouTube, is about how wonderful life is for the orcas as Loro Parque, and one of the things that make it so wonderful is the fact that the orcas don’t have to hunt their own food. 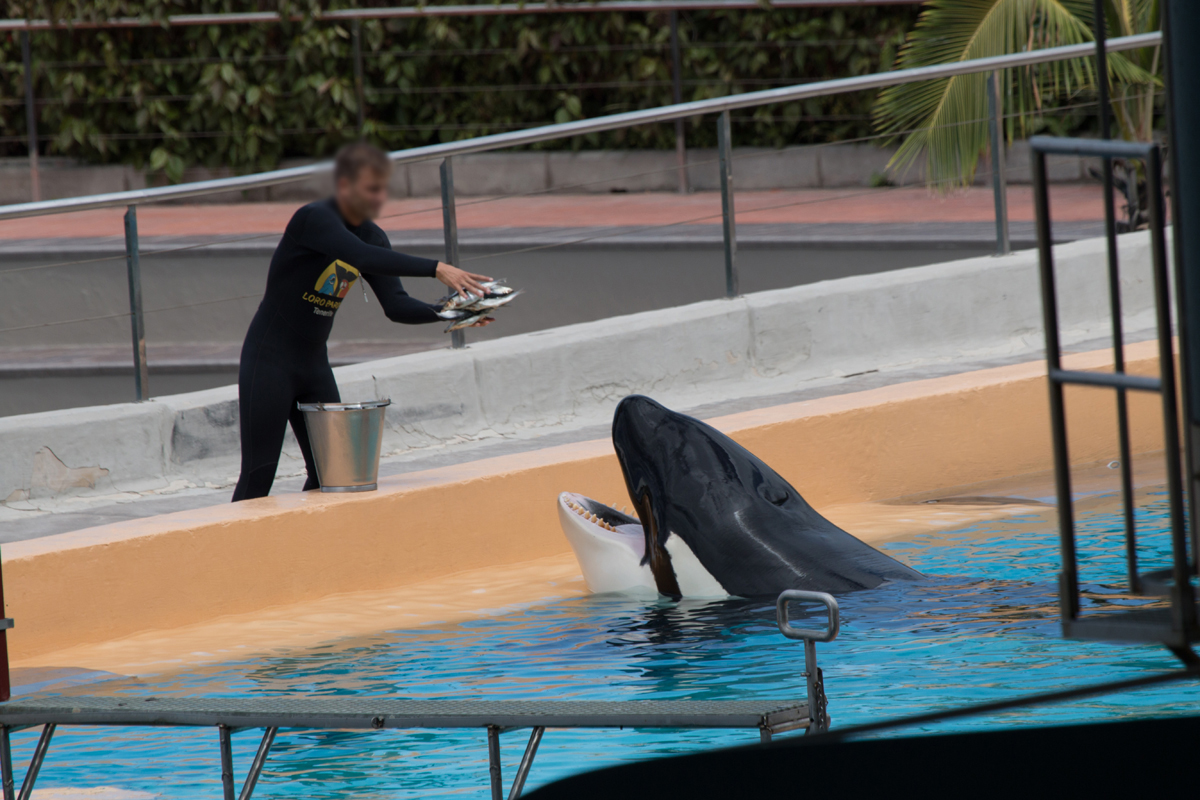 Trapped in small tanks and unable to forage on their own, captive orcas depend completely on their trainers for food. Credit: Helene O’Barry

One of the orca trainers, who is standing in front of the show stadium, says, “Welcome to Loro Parque, where Keto, Kohana, Skyla, Tekoa, Morgan, and Adán enjoy a safe, pollution-free environment in the most modern installation on the planet: Orca Ocean!” She goes on to say what is repeated like a mantra in dolphinariums around the world every single day: “They are ambassadors of their own species in the wild.” The music is upbeat, and the narration is accompanied by the orcas jumping and beaching themselves onto the concrete slide-out. They have been trained to act in ways that confirm the trainer’s cheerful message. With each jump, it is as if they say, “It’s really true. Life at Orca Ocean is so much fun, and we love it here!” The video shows two sinks filled with dead fish, and the trainer says, “We provide them a healthy diet that includes fish carefully selected from the best fisheries to fulfill their needs.” And then it comes: “They are not in need of swimming hundreds of kilometers in search of food!” The trainer adds, “They do not work for food.”

So, according to Loro Parque, captive orcas are privileged to be hand-fed by humans, unlike orcas in nature who suffer the misfortune of having to plow through hundreds of kilometers of ocean water in hopes of finding something to eat. That is the picture that Loro Parque passes on to its audiences: At our facility, the orcas benefit from free food and no work. Life in captivity is so much better!

Toward the end of the video, the trainer talks about the special bond between the trainers and orcas, and how the behaviors orcas demonstrate during husbandry procedures as well as the shows are based on “positive reinforcement methods.” “Thanks to these methods, a special trust is created between the orcas and their keepers,” she says. “They are happy, content, and in good health.” The video then shows her standing next to Keto, who has beached himself onto the concrete slide-out. The trainer illustrates her “special bond” with Keto by rubbing his side and smiling. It is interesting to note that she is standing far from Keto’s mouth. That is understandable, as Keto attacked and killed his trainer during a training session in 2009.

There is no mention of that, of course, and the last sentences of the video aim at persuading viewers to purchase tickets: “Come and discover Loro Parque for yourselves. Ninety-eight percent of our visitors are happy about their experience in our animal embassy, recognized as the second best in the world and number one in Europe, according to TripAdvisor!” The video shows an orca beaching itself on the platform and two orcas jumping in the background as if they just can’t contain themselves with happiness. The message is clear: Loro Parque is paradise for orcas. And the trainer’s last statement is “We love and care for our animals!”

What is left out of Loro Parque’s video commercial is the fact that orcas in captivity do not receive their fish for free. They do work for their food. Trainers reward them with food during training sessions and shows when they perform a command correctly. This is how they are persuaded to perform the same abnormal behaviors over and over during rowdy, repetitive performances. Trapped in a concrete tank and unable to forage on their own, the orcas at Loro Parque depend on their human keepers to survive, and they know that. The powerless predicament that orcas suffer in captivity is what makes a 3-and-a-half-ton orca cooperate and perform silly dance moves on the concrete slide-out. Orcas should not have to perform such degrading stunts to entertain crowds of holiday makers, and they should not have to live on a diet of dead fish. 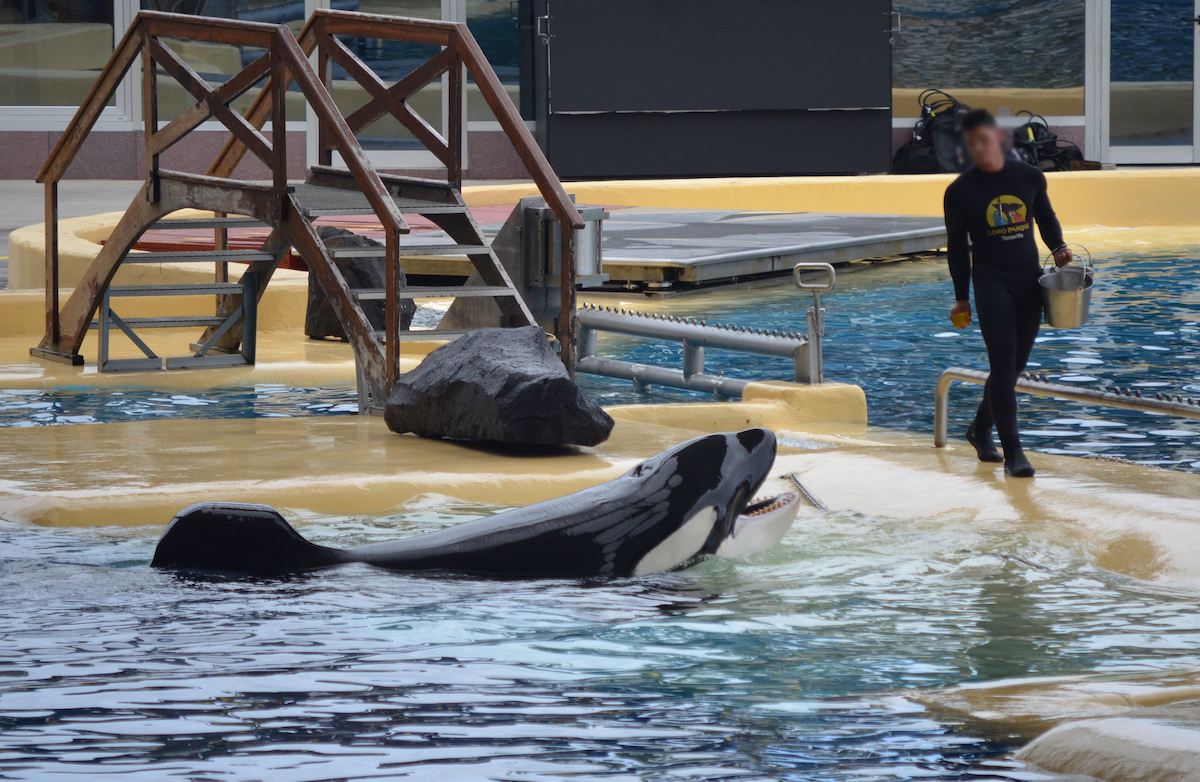 Keto opens his mouth to receive a chunk of gelatin, which is an artificial source of hydration for captive orcas. Credit: Helene O’Barry

One of the problems with this diet is that it can cause dehydration. Orcas and other dolphins don’t drink water. The only fluid they get is in the fish they eat. Live fish contain lots of fluids. A substantial part of that fluid is lost when the fish is frozen and then thawed. Therefore, captive orcas are also fed artificially colored gelatin and ice cubes. I have seen the trainers at Loro Parque feed the orcas buckets full of ice cubes and large chunks of yellow gelatin. Such an unnatural diet is not a privilege. It is one of the negative effects of humans putting themselves in charge of what orcas eat.

There is another, even bigger problem with Loro Parque’s description of how captive orcas are, in fact, lucky that they don’t have to hunt their own food. “They are not in need of swimming hundreds of kilometers in search of food,” the script reads. Loro Parque makes it sound as if swimming is a tedious burden that orcas would rather be without. It is a ludicrous statement that contradicts everything that orcas represent. Orcas are among the fastest-swimming marine mammals in the world. Traveling freely over vast distances, navigating, exploring, diving, foraging, and using their highly evolved sonar and communication skills to cooperatively hunt live prey are vital aspects of their lives.

It is what orcas are all about, but Loro Parque apparently does not know that, or choses to ignore it. In its quest to justify confining a free-ranging marine mammal behind impenetrable concrete walls and iron gates, Loro Parque brushes the natural abilities of orcas aside as utterly irrelevant and unimportant. It is as if Loro Parque is not even aware that foraging, to orcas, is about so much more than just fulfilling their hunger. Orcas have evolved into a complex culture, and the most experienced orcas in the pod pass their tremendous knowledge to the next generation. That knowledge includes a variety of foraging techniques that bear testimony to their strength, speed, intelligence, and ability to communicate, cooperate, and strategize. 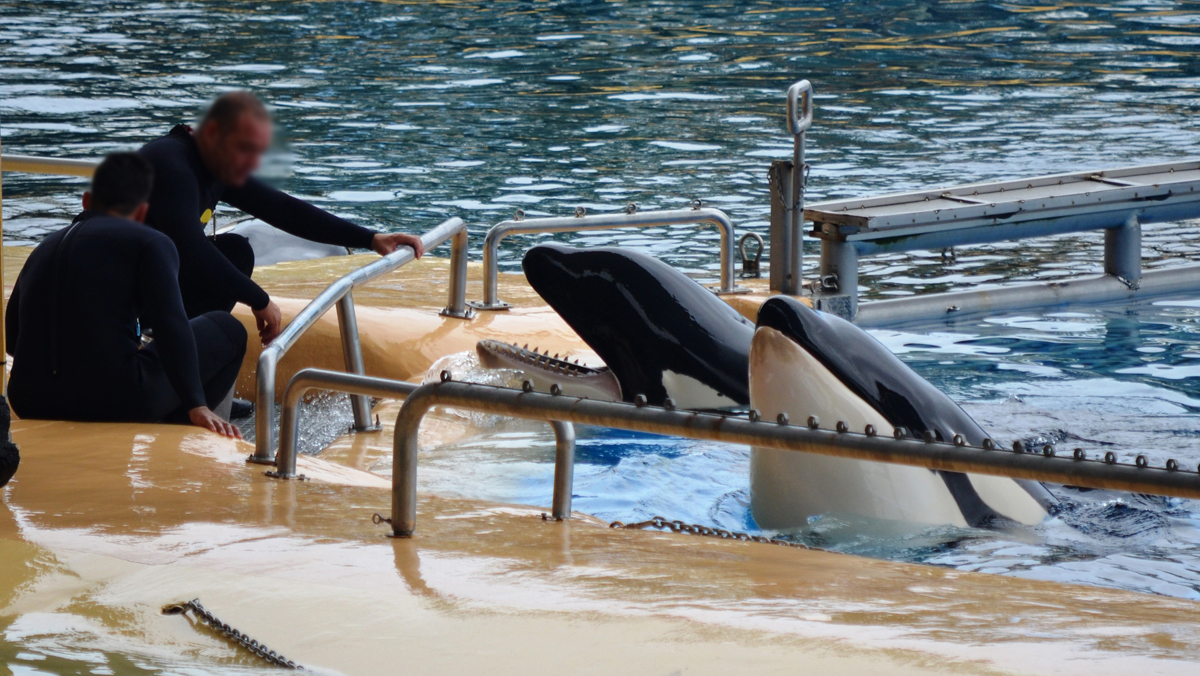 Unlike their relatives in nature, the orcas at Loro Parque will never use their sonar, communication skills, intelligence and speed to navigate, explore, and hunt live prey. Credit: Helene O’Barry

To belittle these highly evolved skills and imply that they are not a big deal comes from a place of supremacy. But humans have no right to keep orcas under such poor, barren conditions and act like it’s a privilege for an intelligent, complex being to live like that. Loro Parque wants us to believe that orcas, who in nature enjoy status as the ocean’s top predators, would rather not have to spend their time foraging! And this is a facility that claims to educate people about orcas. The notion that captive orcas are privileged because they don’t have to swim over long distances to hunt live prey illustrates a complete lack of understanding for everything that comes natural to these powerful predators.

The image of orcas that Loro Parque passes to its audiences is not education. It is misrepresentation. Rather than minimize the importance of the orcas’ physical strength and awe-inspiring foraging techniques, we should admire and respect them. Rather than confine orcas to barren, minuscule concrete tanks where their natural abilities can find no expression at all, we should do all that we can to protect their right to live in accordance with their true nature in the environment that has shaped their existence for millions of years: the ocean.

Featured image: During Loro Parque’s theatrical shows, the ocean’s top predators are being fed dead fish and ice cubes as rewards for jumping and dancing on command. Credit: Helene O’Barry