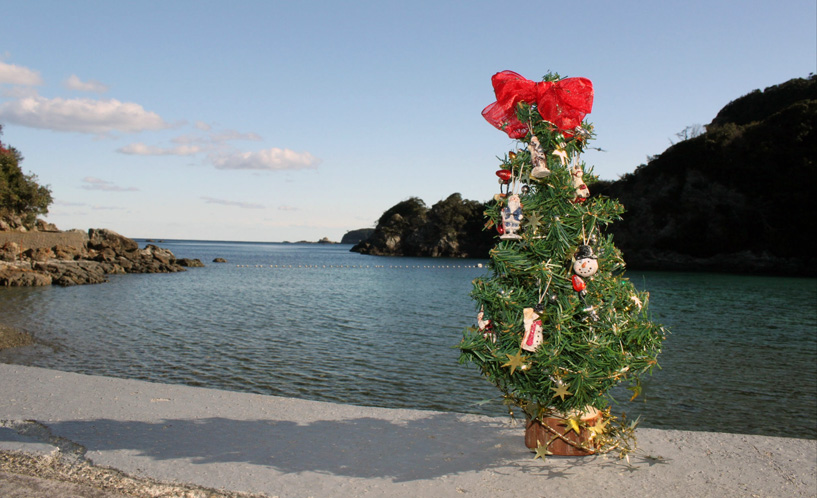 Just two weeks after The Cove DVD came out in Japan, the horrifying events of 3/11 took place.  A devastating earthquake, followed by a massive tsunami and a horrifying nuclear meltdown, hit northern Japan.  We had a volunteer Cove Monitor in Otsuchi, one of the hardest hit towns.   The entire city was washed away.  For days we watched in horror, waiting for word.  Our volunteer Brian Barnes emerged from the rubble safe, but what he witnessed will forever stay with all of us.

Our hearts continue to go out to the innocent people affected by this disaster.

This event made it difficult to rally support in Japan for the dolphins in Taiji.   Japan was literally a nation in shock.   Rightfully so.

On Sept. 1, I along with supporters from seven countries went to the Cove, as the Dolphin Project Cove MonitorTeam and I always do on the first day of the hunts.   We held a prayer vigil for the dolphins that would be lost that season and for the people in northern Japan still struggling to rebuild their lives.   While there, a mighty typhoon hit Taiji.  Half our volunteers made it back to Osaka, while the others and I remained and once again witnessed horrible tragedies.  A number of the dolphins trapped in captive sea pens were beaten up by the storm and some may have perished.  There were massive floods, and several people in the Taiji area were also lost.  Again, we were bonded in tragedy.

Yet, here we are again.  Just two weeks ago the Japanese government announced that they would be investing an additional $28 million into whaling efforts in the Southern Ocean.  It is very disturbing to us that the government would put such a significant amount of tax money into pro-whaling efforts when there are still people in northern Japan suffering.  In Taiji, they reportedly brought in one hundred police officers and a coast guard cutter to watch a handful of peaceful activists.  The government is pouring millions of Japanese taxpayers’ yen into the defense of their indefensible positions.  Clearly, the Japan Fisheries Agency rules Japan with such power that not even unbearable human suffering can break it.   At least so far.

For all of us, this is not a time to shy away from our progress.  We must double our efforts.   Our Cove Monitors have maintained a constant presence in the Cove, respectfully documenting and chronicling the horrors so that the world will stay focused on Taiji.

On the weekend of December 19th, The Cove filmmakers and I, along with volunteer Cove Monitor Leilani Munter and actor John Leguizamo, turned the Empire State Building red in honor of the dolphins in Taiji, shining an international spotlight on the atrocities there.  We alerted Japanese media and sent photos to the Fisheries Ministry, Consulate and Embassy offices.   Local police in Taiji confirmed they had heard about in Japanese media, even commenting that it was “cool.”

But we must keep it up!  You can help by donating today to support our efforts:

We continue to ask for your donations, because your donations and support are working!  The reaction of the Japanese government proves we are having an effect.  They think they can outlast us by spending more – we must prove them wrong.

We don’t have as much to spend, but we extend our dollars through our volunteers and our strategic thinking to the maximum extent.  And we have been and must continue to be far more tenacious than the Japanese government.

$1000 will keep monitors at the Cove for a solid week, providing pressure and an eye on the dolphin hunting fleets.  This pressure makes it more difficult for them to operate, and the dolphin killing numbers are down.

$5000 allows us to buy and test whale and dolphin meat samples and publicize the findings to health officials, scientists and the public.  We need to keep hammering on how feeding mercury-laden dolphin meat to schoolchildren is cruel and inhumane and must be stopped.

$10,000 would allow us to produce a ten-minute video that spotlights two successful business models built around enjoying dolphins in the wild.  One of the subjects is a former dolphin hunter, Mr. Ishii of Futo, who converted his business to a dolphin watching business.  The other is Mikura Island, a short ferry ride from Tokyo.  They have built the island as an eco-tourism destination where people love and cherish dolphins.  This eco-tourism alternative to killing is what should be happening in Taiji, and we can help get the word out:

Will you help with a year-end donation?  Again, even small amounts help!

We are making progress.  Each and every one of you has been important to this progress.  We have some great victories in 2011 that we can celebrate:

In the Solomon Islands, the government has finally agreed, after years of pressure from Dolphin Project and our supporters, to ban the export of live dolphins from that country starting January 1st.

We are aiding grassroots efforts in many regions to stop new dolphinariums from being built – Hong Kong, Singapore, Thailand, St. Maarten, and Puerto Rico, to name the most recent hot spots.

In Indonesia, we have succeeded in stopping the illegal captures of dolphins for captivity and built a sea pen for release of rehabbed dolphins.  We are negotiating with the government to obtain several dolphins that are being kept in traveling circuses and aquariums to release them safely back into the wild.

The killing and exploitation of dolphins will end, that I can guarantee you.  It will take time and effort on our part, and it won’t be easy.

But we have a dedicated staff and amazing volunteers all around the world to help!  We won’t quit on this effort.  The stakes are too high.  And we know you are supporting our efforts all the way.

To all of you, thank you so much for your support.  We have amazing friends all around the globe.  We hope you have a happy and healthy New Year.

I’m happy to report that Heather Hill in Taiji tells us the fishermen have packed up and are taking a holiday, too, so no killing of dolphins in the Cove until January 4th.  Thanks Heather!

Christmas at the Cove photo by Heather Hill.