London Says NO to Crimes Against Nature

Home/Blog/Campaigns/Japan/London Says NO to Crimes Against Nature 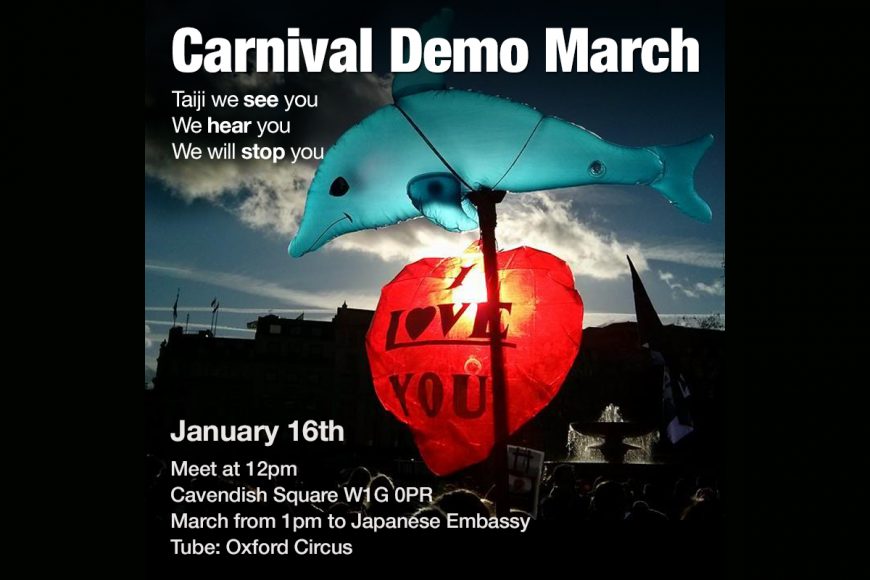 Imagine someone said you had the power to end the senseless slaughter in Japan. Imagine we, in London, held the power to put a stop to this, once and for all. Well, we do! ~ Ric O’Barry, Founder/Director, Dolphin Project

Who: We are calling on EVERYONE in the U.K. and Europe to let Taiji know their continued crimes against nature must end – NOW. Enough is enough!

What: Carnival Demo March to the Japanese Embassy in London

Why: Says Ric O’Barry, “London is key. The pressure in London is working.”

January 16, 2016 will see people from all over the U.K. and Europe joining forces to march throughout central London against the annual, barbaric hunt of dolphins in Taiji, Japan. Nowhere else in the world would such killings be considered acceptable, and in most places, these crimes would be punishable by law.

How many more dolphins must be slaughtered in front of our eyes, or taken for a “life” of captivity until we say ENOUGH IS ENOUGH? We are calling on ALL groups, animal charities, animal lovers and just about anyone who wants to see an end to these crimes against nature to SHOW UP and let your voices be heard!

Please help by inviting all your friends to this event.