London: Loud and Proud for the Dolphins 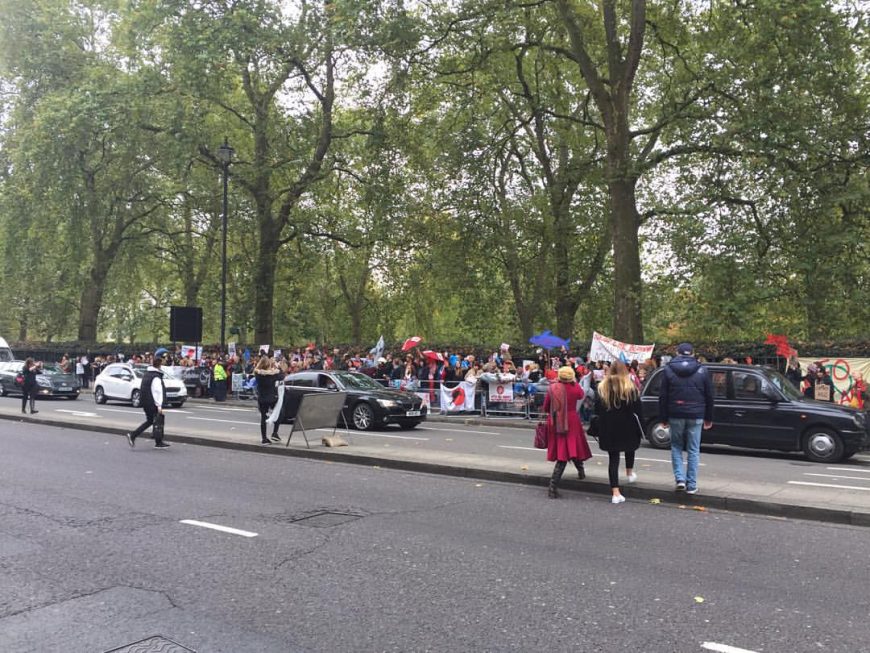 Nearby construction workers express their love for the dolphins. Image: Ollie’s Cycle Challenges.

London was loud and proud last Friday when — at its height, around 800 people aired their grievances outside the Japanese embassy for the dolphins killed in the drive hunts of Japan.

The Japanese dolphins drives which last for six months of the year, force wild dolphins swimming past the town of Taiji, into a cove, where they are sealed off from the ocean. Once they are contained, the marine mammals are killed for meat consumption or sold to captive facilities for entertainment purposes.

The Dolphin Project believes that London holds the key to ending this barbaric practice. “The protesters are are the best in the world,” said Ric O’Barry in an interview with Anneka Svenska. It proved this on Oct. 16, when the Japanese embassy chose to remove its flag from its own building. This has never happened before.

The Japanese flag being taken down is a sign of progress. — Ric O’Barry/Anneka Svenska

At the center of the demo was Ric, who has recently returned from Taiji cove. During his visit, he was forced to witness the cruelty of the hunts firsthand when a Risso’s dolphin died at his feet.

Ric was joined by Dominic Dyer of Born Free and Care for the Wild, by Cove Monitor Maria Nangle, and by Ollie Blackmore of Ollie’s Cycle Challenges. Blackmore recently completed a grueling, 3,600 kilometer bicycle ride from one end of Japan to the other, to raise awareness for Japan’s dolphins.

Ric was introduced by Dyer, and received a rousing welcome:

It was perhaps the loudest demo yet for the dolphins, who must constantly run the gauntlet as they transition past Taiji. Despite the drives receiving international condemnation, Japan continues to argue that they are cultural and tradition. It is reasoning easily disproved by history and local Japanese conservation groups.

Put simply, these dolphins are driven for profit. Even JAZA, the Japanese Association of Zoos and Aquariums, recently told its members not to source dolphins captured in the Taiji drives. Yet the Taiji Fisheries Cooperative remains stalwart in its defense of the hunts and intends to continue hunting them. The Taiji Whale Museum chose to withdraw as a member of JAZA rather than give up its access to disposable dolphins. The Japanese embassy in London removed its flag. O’Barry called this a “sign of progress.” Image: Ollie’s Cycle Challenges.

The local government of Taiji town may profess pride in what it does, but its actions prove otherwise. The dolphins are now killed beneath tarps and have wooden plugs inserted into the wounds to prevent them from bleeding out and turning the waters of the cove, blood red. Dolphin sales and transports are cloaked in secrecy but CITES permits reveal that these dolphins are shipped worldwide. Can you say loud? Nobody could doubt the passion of this protest. Image: Ollie’s Cycle Challenges.

With Japan getting set to host the 2020 Olympics while its own people continue to struggle in the aftermath of Fukishima, is appalling.

One thing is clear. The Japanese government can no longer choose to be a player on the world stage and then hide from its actions. On Friday, Oct. 16, the city of London placed them firmly on notice.

Someday, it will go away and I think London is the key to that. — Ric O’Barry/Anneka Svenska

Thank you London! It’s going to take far more than the removal of the Japanese flag to hide from the world, what the Japanese government currently endorses.