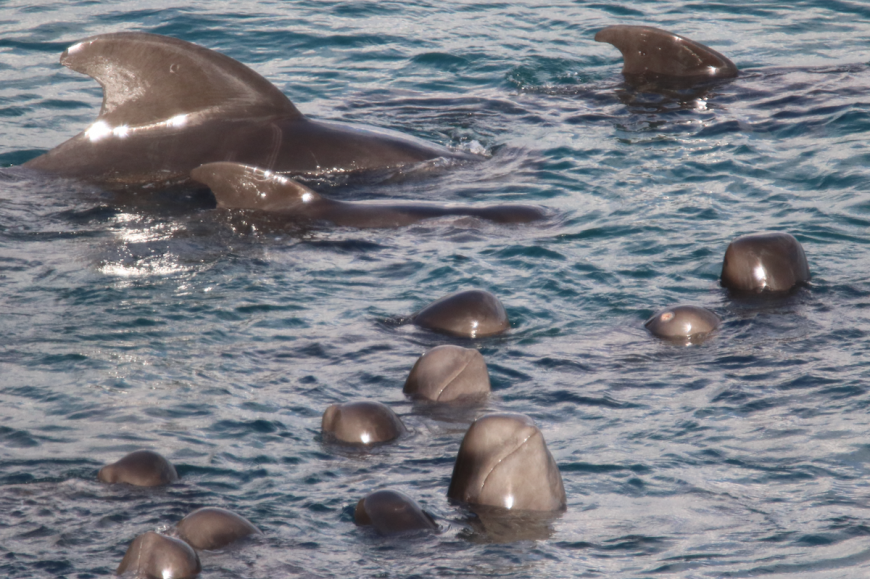 Juvenile pilot whales began to spyhop, trying to ascertain what was going on, while the larger adults, including the matriarch, or “pilot” circled the 15 young, in attempts to offer comfort and protection – two things which the young whales would soon be forever deprived of.

For the next several hours, Dolphin Project Cove Monitors witnessed these behaviors repeated over and over, and as the sun began to sink, so did our hearts, knowing the pod would be left alone overnight, scared, stressed and vulnerable to what awaited them the following day.

Day 2, 12-8-16: At 6:30 a.m. two skiffs and one banger boat approached the cove, with our monitors filming what would be the last moments this beautiful pod would spend together. The hunters wasted no time, separating the juveniles from the adults. The slaughter started soon thereafter, with the large adults, around 25 in total being dragged alive by their tails towards the tarps. The juveniles panicked, throwing themselves against the sharp rocks. Multiple pilot whales became entangled in the nets. Divers jumped into the water, pushing and pulling them away from the rocks. Almost immediately the water was tinged with red as some of the dolphins had injured themselves in their panic.

Just prior to the two groups being separated, a young calf rested its head against the lifeless body of an adult.” ~ Alexandra Johnston, Dolphin Project Cove Monitor

It was terrifying to watch, terrifying to hear and while Dolphin Project Cove Monitors live streamed for the world to see, one by one, each of the adults were killed. Loud, frantic tail slapping could be heard from underneath the tarps, as could the anguishing sounds of their last breaths as the dolphins lost their lives. Every time a pilot whale was killed, the juveniles became frantic, swimming erratically, spyhopping and pressing their bodies against the nets in attempts to reach the adults. In a horrifying moment, one pilot whale escaped from underneath the tarps, a rope still attached to its fluke. Dying, it reached the ropes before it was dragged back to the killing cove and slaughtered.

This cycle continued for hours, and around 10:30 a.m., four hours after the slaughter began, it was done.

In clear view of the youngsters, the bodies of the dead dolphins were dragged by their tails to the butcher’s house. Six trips later, the cove became eerily silent and the juveniles were left alone, once again.

The young pilot whales were vocalizing continuously throughout the slaughter. They almost sounded like kittens mewing, gentle but desperate, crying for their mothers.” ~ Alexandra Johnston, Dolphin Project Cove Monitor

At around 2:30 p.m., 30 hours after the pod was captured, skiffs and banger boats returned to forcibly drive the youngsters back out to sea. While these dolphins were spared the horror of being slaughtered, they would be irrevocably damaged, left to fend for themselves without the guidance of the rest of the pod.