Leilani: Racing for the Dolphins

Home/Blog/Leilani: Racing for the Dolphins 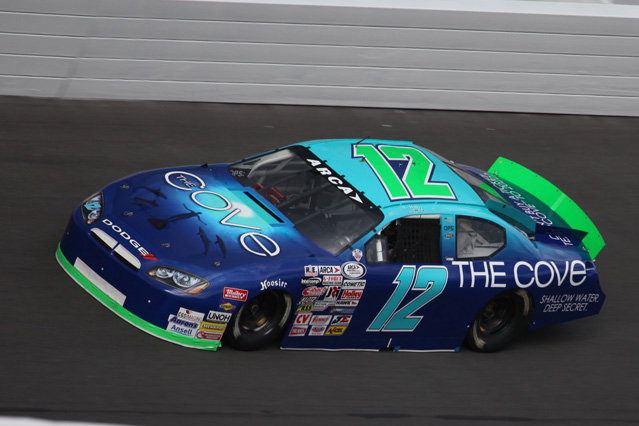 I hope you had a chance to tune into the exciting ARCA race on Saturday.  It was 80 laps at Daytona, which doesn’t last very long in cars going 185 miles an hour.

Leilani was representing all of you, our thousands of active volunteers fighting for the dolphins all around the world.  And she was especially grateful to the many donors who helped her set up the Cove car that educated millions of people across America in one short burst.  Many will now know or find out about the plight of the dolphin hunts in Japan and the problems of dolphins in captivity.

Leilani Münter did an incredible job in her special Cove Car, painted to feature the cause of the dolphins.  She even had an in-car camera, so she, her husband Craig Davidson (known affectionately by all as “Kiwi”), and her racing team (to which she had shown The Cove documentary) pasted Cove stickers in camera range.

Leilani on her car cam, from SPEED Channel coverage.

At one point, she lost her rear tire and pulled out of the race.  A real pro, she brought her car under control, headed into the pits and quickly re-entered the race with a new tire.

While a major set-back for the race, the incident played big on television, with the SPEED channel commentators even talking about The Cove movie and the problem of dolphin captivity as her car was shown spinning out, with the tire flying off, and coming back under her control.  They even recommended people see the movie.

Leilani loses a tire and brings her car under control, from SPEED Channel coverage.

At the race track, I was amazed by seeing some many old friends from our Save Japan Dolphins Campaign.  Carrie Burns, wife of our monitor in Taiji right now, Tim Burns, attended, as did Jennifer Knoll and her husband flying all the way from California.  Cove Monitor (with Leilani) Daniella Pletenberg helped arrange my ride to Daytona.  Rachel Larivee flew to Daytona all the way from London, Ontario.  I also managed to run into Becca Jurcsak’s parents at a restaurant in town, as they recognized me, and I recognized their EcoJoia t-shirts.   So many dolphin fans showed up, I can’t even remember all the names.  But we are all one big family now, an extended Dolphin Project Team of volunteers working together in Japan and around the world to help save dolphins.

It was bitter sweet indeed that Leilani did not place near the top in the grueling race.  But it was a tremendous win for the dolphins!  The television exposure to an audience not familiar with the plight of dolphins was priceless.

As Leilani told me, she wanted to get The Cove documentary out in front of mainstream America, and where better than a stock car race?

While with her after the race. I presented Leilani with a plaque:

Ric O’Barry and your Dolphin Project team, honor you, Leilani, for your outstanding efforts to protect dolphins around the world.

You have braved angry fishermen and roaring racing cars, lit up the Empire State Building in red, and proven yourself a steadfast, feisty and wonderful companion in our Campaign to Save Japan Dolphins.

The dolphins are safer because of your stellar efforts.

We thank you, Leilani, with all our hearts.

Leilani was moved to tears, and thanked everyone who had helped her get to Daytona and on the track.

A great time was had by all, as everyone shouted and roared every time Leilani’s car appeared on the television.

Leilani celebrated her 36th birthday at Daytona for the dolphins.  And she came in 36th in the race.  Coincidence?

And some more good news:  Tim Burns, our volunteer Cove Monitor in Taiji, reports no dolphins killed over the past few days.  The dolphin hunters take Saturdays off; today (Sunday), they went out and came back in, and no dolphins to be seen.  I think some of Leilani’s magic generated in Daytona may be helping in Taiji.