Last Thoughts on My Last Day in Taiji

Home/Blog/Japan/Last Thoughts on My Last Day in Taiji 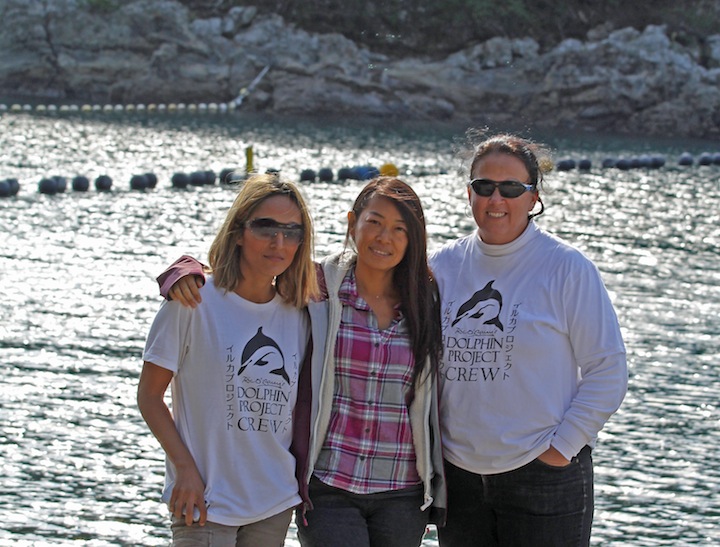 (NOTE: This past weekend was Cynthia Fernandez’s last in Taiji, so she wrote down some of her thoughts for us.  I again want to thank her for taking the time, at her own expense, to come to Taiji and report on the dolphin hunts for Save Japan Dolphins.  She and our other Cove Monitors are really great!  — Ric O’Barry)

It is my last night in Taiji.  It is with very mixed feelings that I prepare to leave.  Of course, part of me wants to go home, to get far away from this place and the horrors that I have seen.  But a bigger part of me wants to stay, to be a voice for the voiceless, to help expose what happens here and share their stories.  I think everyone who comes here feels the same way.

My two weeks here have been absolutely brutal.  I witnessed the violent slaughter of pilot whales.  I watched the traumatized juveniles being driven back out to sea to face life on their own after watching their family members be brutally slaughtered.  I think of them daily and hope they are somehow able to survive.   I watched several slaughters of Risso’s dolphins.   I’ll never forget the sadness I felt when looking at the pod before the slaughter began and seeing a mother with two tiny calves swimming right next to her.  I’ll never lose that feeling of incredible anger and frustration as I watched the adult Risso’s be slaughtered and then the very young Risso’s calves along with a couple of juveniles be loaded into a skiff, driven out to sea, and then callously dumped over the side of the boat like a bag of garbage.

Even the Blue days were difficult as I witnessed the removal of the dead bottlenose dolphin from a sea pen and visited the captive facilities here.  I visited Dolphin Base and observed the “training” sessions.  Watching those beautiful, incredibly intelligent animals have their spirits broken and be reduced to performing ridiculous tricks for dead fish broke my heart.

I witnessed the incredibly brutal slaughter of a beautiful family of striped dolphins.

Watching one struggle and drown in the net is etched in my memory forever.  The look of fear and panic as those poor dolphins struggled to escape the killers is something I’ll never forget.  The blood that ran as they repeatedly jumped out of the water, onto the rocks in desperation, trying to flee from the killers is another memory as vivid as the red blood that flowed from those beautiful animals.

The worst was the poor dolphin who was struggling against the rocks, trapped but trying to escape.  I watched it struggle and bleed, the more it struggled, the more it bled.  I saw it look up at the killers as if to ask for help, for mercy, only to be brutally untangled and dragged over to the killing area.

There is no mercy in Taiji.

Another memory will be the brutal slaughter of the Risso’s dolphins.  The way the killers treated them will be forever in my memory.  Wrestling them, tying their flukes to their skiffs and dragging them to the killing area as they struggled for to breathe.  I understand that the killers don’t think of the dolphins the way we do, as sentient, intelligent, social, family oriented animals.  I understand that they think of them as little more than fish, not that any fish should be treated this way, either.  However, that is no excuse from the incredibly brutal and inhumane way in which these animals are treated.  It’s just unbelievable.

Yes, I witnessed many Red Cove days on my trip to Taiji.  I have many horrible memories.  But, I also met some incredibly dedicated people who are fighting to end this.  I will carry them in my memory as well.  I will remember all those who have come to document these atrocities and to be a voice for the dolphins.  Especially Sakura Paia, our brave Cove Monitor from Japan who is here to witness these atrocities just about every day.  I have so much respect for her.  It is her and her fellow Japanese activists who will bring about change here.

Tia, Sakura and Cynthia at the Cove.

As for me, I will return to my home and my job as a high school teacher.  However, I will use this experience as an opportunity to spread the word.  I will continue to share the story of dolphin captivity and the dolphins of Taiji to all who will listen.  I will share with my students, visit other classes, other schools – anywhere I can go, I will go.

I strongly believe that education is vital in ending captivity.  The children and teenagers that I have spoken to totally get it when they are presented with information.  I have heard many times over, “I never thought of it like that before.”  They just need to be informed, to think about what life is like for a captive dolphin.  The younger generation will bring about change.  I’ve seen it starting.  I believe it will happen, eventually.  It will be a long struggle as the captive industry will fight to stay alive.  Let’s all do our part and spread the word.

For now, it is “goodbye” to Taiji; however, I will return.  I will return to this place each and every season…until it ends!