Korean Captive Dolphins have a Shot at Freedom 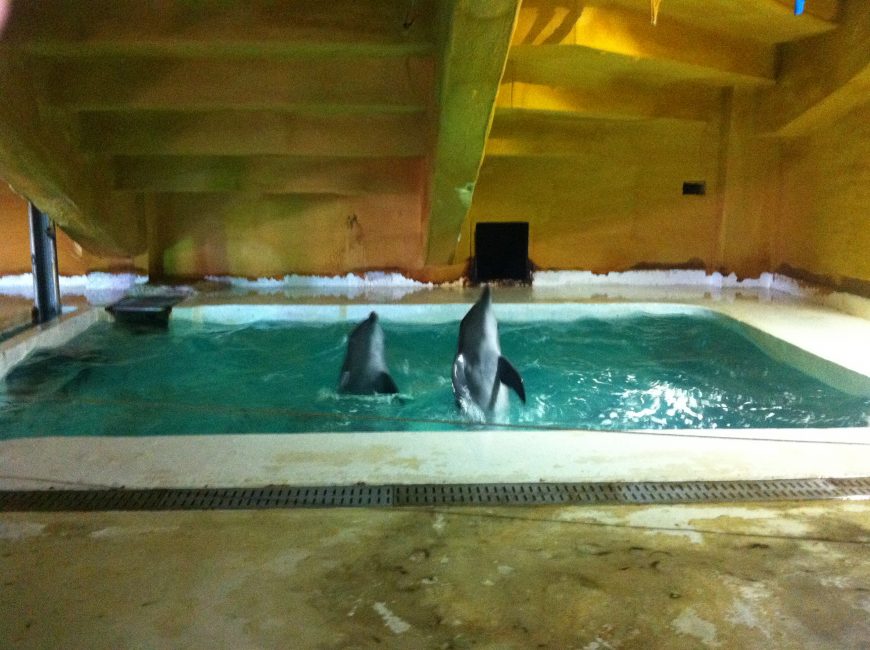 Korea could be well on it’s way to becoming a dolphin-friendly nation. Like many others, it is host to captive facilities wherein dolphins are made to perform degrading tricks and live in unbearably small tanks. But a recent ruling on the case of five illegally captured bottlenose dolphins is making waves in animal rights, as well as animal industry, circles.

Pacific Land, a tourist attraction on the south coast of Jeju Island, is an abysmal prison for it’s captive dolphins – 11 of which were illegally purchased from local fishermen between 2009 and 2010, according to local activists. Of these, 5 remain alive and on perpetual display in a tank that is smaller than an Olympic-sized swimming pool. When they are not performing, they are forced to live in an underground holding pool, meaning that these dolphins have been living for years without ever seeing natural daylight.

The good news is that the president and a director of the park, known only by their surnames Heo and Koh, were sentenced to eight months in prison, fined US $8,760 and – most importantly – ordered to release the surviving 5 dolphins back to their natural habitat. Predictably, Heo and Koh are appealing the verdict, which carries the unfortunate possibility of up to two year’s delay before the Korean Supreme Court rules on the case – meaning a long, painful and potentially fatal legal limbo for the dolphins.

Enter the Korean Animal Welfare Association, which has arranged a special forum in Seoul in order to raise public awareness of the cruelty of exhibiting dolphins and other wild animals. They have invited Ric O’Barry and others to discuss the required procedure for releasing dolphins into the wild successfully – something with which O’Barry has abundant experience, and which the captivity industry is sure to oppose tooth and nail.

The ruling for the release of the Pacific Land dolphins was the first of its kind in Korea. It came on the heels of Seoul Mayor Park Won-soon’s announcement that the city would free one of the dolphins at the Seoul Zoo, after it was discovered that the male dolphin, named Jedol, was acquired from Pacific Land and was discovered as having been illegally captured as well. In a move to appease outspoken animal rights groups, Seoul City suspended the dolphin show. However, in a move typical of the captivity industry, public viewings have recently been recommenced under the guise of being “eco shows” aimed at educating the public about marine mammals. It is well known that there is nothing educational about captivity, and as O’Barry has astutely pointed out, “Dolphin shows are as educational about dolphins as Mickey Mouse is about real mice”.

Mayor Park Won-soon has earmarked 870 million won ($765,000 US) in order to build a facility for Jedol’s rehabilitation and release, which is predicted as taking about a year’s time. Hyung-ju, a member of the Korean Animal Welfare Association, argues that the Pacific Land dolphins should be included in this release as well. “They were trained to bury their survival instincts…but as they have been with humans for only a couple of years… we think they have high chances for adaptation.” While some groups are calling for Pacific Land to foot the significant bill, Hyung says that her group plans to raise the funds themselves, should it be necessary.

The regulatory body responsible for regulating cetacean catches is the Korean Food, Agriculture, Forestry and Fisheries Ministry (FAFF), operating under the “Notification of Conservation and Maintenance of Cetacea Species” document. The FAFF can give approval to catch marine mammals “for educational performance and exhibition” after it evaluates the animals and the organization wanting to use them. Unfortunately, FAFF only has control over if and why the marine mammals can be harvested, and no say in how they will ultimately be cared for – which is one of the contributing factors to these dolphins’ ongoing abuse.

Their fate now rests in the hands of the Supreme Court. The upcoming forum should be an excellent opportunity to engage the public on the increasingly prominent issues of cetacean and animal rights in Korea, and should serve as important leverage to weigh the court’s decision in a way that will benefit the dolphins. Surely, they deserve their freedom.

Ric will be reporting on the forum in a future blog.

A few of the captive dolphins currently being held at Pacific Land. Photos courtesy of Ryu Woo Jong.

The Korean rehabilitation and release project, of which I was an advisor and the Korean Animal Welfare Association (KAWA) an integral part,...
read more