Japanese Activists at the Cove

Home/Blog/Japan/Japanese Activists at the Cove 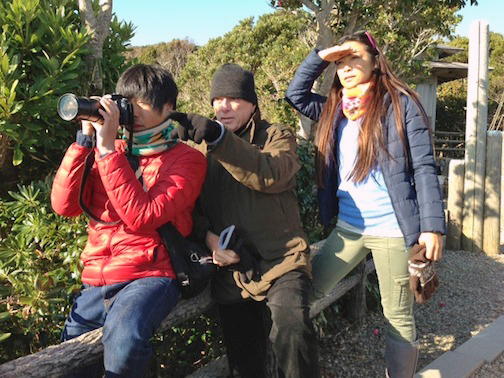 For the past three days, I’ve been here with two Japanese activists, Sakura and Ryo, and our volunteer Cove Monitor from Hong Kong, Suzette Ackermann.

Two days ago, there was a bloody slaughter of several Risso’s dolphins. (Yet, for some unknown reason, the dolphin hunters also let some of the Risso’s dolphins go.  This has happened a lot this year.  By one estimate we’ve seen, around 1,000 dolphins have been herded into the Cove this season, yet almost 25% have been released alive, including bottlenose dolphins and pilot whales, as well as these Risso’s dolphins.  These levels of release are unprecedented, as are the numbers being caught for captivity.)

A day ago, the hunters did not go out, taking the day off.  Today, the hunters went out but came back in empty-handed.

So we’ve seen three days with three very different outcomes in the Cove.

Of course, the big news is that Japanese activists are coming to Taiji to find out about the dolphin hunts for themselves.  Sakura has invited many of her colleagues and friends to come to see the hunts.  There is no need for us to tell them about the hunts – they want to see it for themselves and make up their own minds.

These Japanese activists are very involved in ways we cannot be.  They talk to the many Japanese policemen and Coast Guard officials, making sure they stay within the law and don’t give the dolphin hunters of Taiji any excuses to complain.  (That does not stop the complaints, of course, but it puts the activists in a friendly light with the authorities and undermines the efforts to demonize them.)  And they talk with the local people living in Taiji.  Sakura told me of an 80-year-old Japanese resident of Taiji she spoke with recently who is very much against the dolphin hunts.  Many local Japanese are against the hunts, but they are afraid to speak out.

Ryo, Ric and Sakura overlooking the ocean near Taiji harbor.

Suzette too is familiar with these issues.  She lived in Tokyo for many years and speaks Japanese.  She understands the Japanese way of doing things, which can differ from our own.

Over the next months, it will be our intention to “stand down” from our presence here in Taiji in favor of Japanese activists, who can chart their own course for opposing the dolphin hunts.  That is my hope, at least.  It will be the Japanese who stop the hunts, ranging from mothers who refuse to buy poisoned dolphin meat for their children to activists who oppose the hunts for the sake of the welfare of dolphins.

For the moment, I am grateful to be here to share with Ryo, Sakura and Suzette.  They will be the activists of the future.  And, not surprisingly, they care as deeply about the dolphins as we all do.