Japan Report On the Beach in Taiji

Home/Blog/Japan/Japan Report On the Beach in Taiji 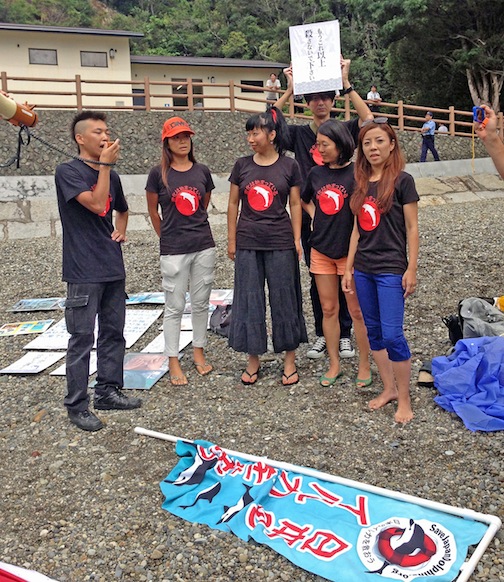 These picture, this moment touched me the most… Satoshi Komiyama, head of Flippers Japan and organizer of Friday night’s Flash Mob Action in Shibuya Crossing in Tokyo that Ric and the Dolphin Team attended by invitation from Satoshi, went into the water, ducked his head under, and broke down because he could hear the dolphins cry.  He got out of the water, and Ric consoled him.  Everyone on the beach broke into tears.  (Ric’s nobori banner says “Save Japan Dolphins” in Japanese.)  Photos by Daniela Moreno.

Ric and Matt Sorum share a laugh on the beach.  People were laughing and people were crying.  It was all very emotional.  Photo by Daniela Moreno.

Japanese activists during our peaceful demonstration on the beach.  We are really proud of their efforts!   Photo by Daniela Moreno.

Tune in to our Ric O’Barry Dolphin Project Ustream Channel for video updates, including live reports from the beach in Taiji by Lincoln O’Barry.

If you can help our Campaign with a donation, go to our CloudRise page for Ric O’Barry’s Dolphin Project.
Photos by Daniela Moreno.  Live streaming by Lincoln O’Barry.