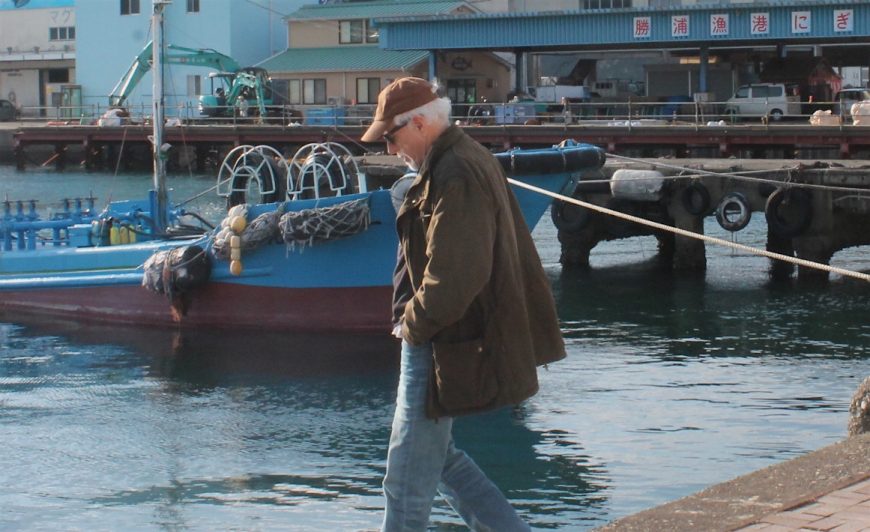 TOKYO – Ric O’Barry, Founder/Director of Dolphin Project and star of the Oscar winning documentary “The Cove” has been placed on an airplane and deported from Japan, where he has been incarcerated for 19 days. Immigration officials cited O’Barry’s trip to Futo on August 27, 2015 as the official reason for his deportation, claiming he did not inform them of his travel plans.

My client, 76 year-old anti-dolphin hunt activist, Mr. Richard O’Barry, was detained for 19 days at a jail-like facility of the Immigration Bureau at Narita Airport, Tokyo. During this time, he lost more than 10 kilos (22 pounds) and suffered from a minor chest problem. With regards to the refusal of his entry into the country and the reason for his detention, the Bureau’s explanation seems very obscure. “Tourism” is not just “sightseeing,” but also includes such activities as visits to places of disasters or holocaust. Mr. O’Barry’s visits to “The Cove” in Taiji and his reports on dolphin hunting should be considered a legitimate tourist activity. To those who believe Japan is an open and democratic country, it must be shocking to realize this kind of experience can happen here and now.

On January 18, 2016, O’Barry was detained by Japanese immigration officials at Tokyo’s Narita International Airport. What started off as a “routine” questioning – something which would typically take upwards of two hours or more, turned into a repeated interrogation. He was placed in a deportees’ facility, similar to a jail, where he was held for over three days. When O’Barry later refused to board a flight that would take him back to the United States, he was placed in a formal detention facility, where he has been incarcerated ever since.

Last August, O’Barry, on his way to Taiji to mark the start of the 2015/16 dolphin hunting season, made a side trip to Futo in support of former dolphin hunter Izumi Ishii’s whale watching tours. He later went on to the infamous fishing town, where, for the past 13 years, he has been visiting to bring the notorious dolphin hunts to light. Despite testimony from Mr. Ishii, explaining that O’Barry did not know he was going to Futo until after he went through immigration, officials refused to change their findings. It would appear authorities had already made up their minds to deport him, no matter what evidence was presented, and they were within their power to do just that.

It is ironic that they are deporting me to keep me quiet, when they themselves have brought more attention to the dolphin slaughter than ‘The Cove’ movie. It breaks my heart to be deported from a country I have grown to love.”

O’Barry’s deportation is cause for concern, especially for other activists, including Dolphin Project Cove Monitors, who are committed to exposing Taiji’s brutal drive hunts. His work methods have been 100% peaceful, yet O’Barry has been treated like a criminal. Also last August, the 76-year old was arrested for allegedly not carrying a passport. After spending a night in jail, all charges against him were dropped when police discovered the passport in the car O’Barry was driving.

This is a desperate attempt by the Japanese Government to hide the atrocities in Taiji. My dad is being held as a political prisoner. They have run out of excuses on why the slaughter and sale of mercury contaminated dolphin meat continues. Dolphin hunting in Taiji began in the 1950’s and is hardly cultural or traditional. The dolphins that aren’t slaughtered are sold to dolphin abusement parks around the world.” ~ Lincoln O’Barry

This is the beginning of something, not the end. The deportation is the green light to sue the government, something we have never had before.” ~ Ric O’Barry

Dolphin Project’s legal team has already filed an objection, with a formal lawsuit to follow. This is far from over.

Dolphin Project would like to thank each and every person who has fought on Ric’s behalf. Your tweets, emails and calls made a difference!

Special thanks to Matt Sorum, Leilani Munter, Maisie Williams, Slash, Dr Brian May and Tom & Kim Schotz. Thank you to Congressmen Ted Lieu, the U.S. State Department, the U.S. Embassy in Tokyo and The Law Offices of Takashi Takano.

Sign the petition to allow Ric O’Barry to enter Japan

About Ric O’Barry’s Dolphin Project: Ric O’Barry’s Dolphin Project is a non-profit charitable organization, dedicated to the welfare and protection of dolphins worldwide. Founded by Richard (Ric) O’Barry on Earth Day, April 22, 1970, the organization aims to educate the public about captivity and, where feasible, free captive dolphins. The mission of the Dolphin Project is to end dolphin exploitation and slaughter, as dolphins are routinely captured, harassed, slaughtered and sold into captivity around the world – all in the name of profit. Dolphin Project works not only to halt these slaughters but also to rehabilitate captive dolphins, investigate and advocate for economic alternatives to dolphin slaughter exploitation and to put a permanent end to dolphin captivity.  This work has been chronicled in films such as, ‘A Fall From Freedom,’ the Oscar-winning documentary ‘The Cove,’ and in the Animal Planet mini-series, ‘Blood Dolphin$.