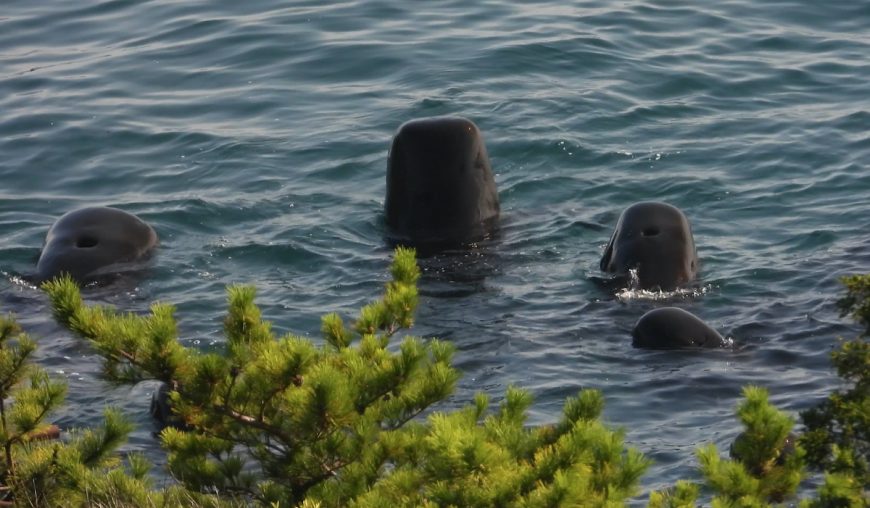 As you begin reading this blog, please be aware that most of the dolphins pictured are no longer alive. Their deaths were not swift, nor were they humane. And while the process of slaughter entails many long agonizing moments — moments filled with panic not just from the individuals being killed, but from their pod members who would soon witness their own slaughters — it’s the hours upon hours leading up to these deaths that are equally cruel, and inexplicable.

If the killing of dolphins by Taiji, Japan’s dolphin hunters was truly a practice honed in years of culture and tradition, wouldn’t the prolonged suffering of these mammals be considered abhorrent? What honor can be gleaned from forcing immense anguish upon innocent beings who have not caused any harm to their perpetrators? 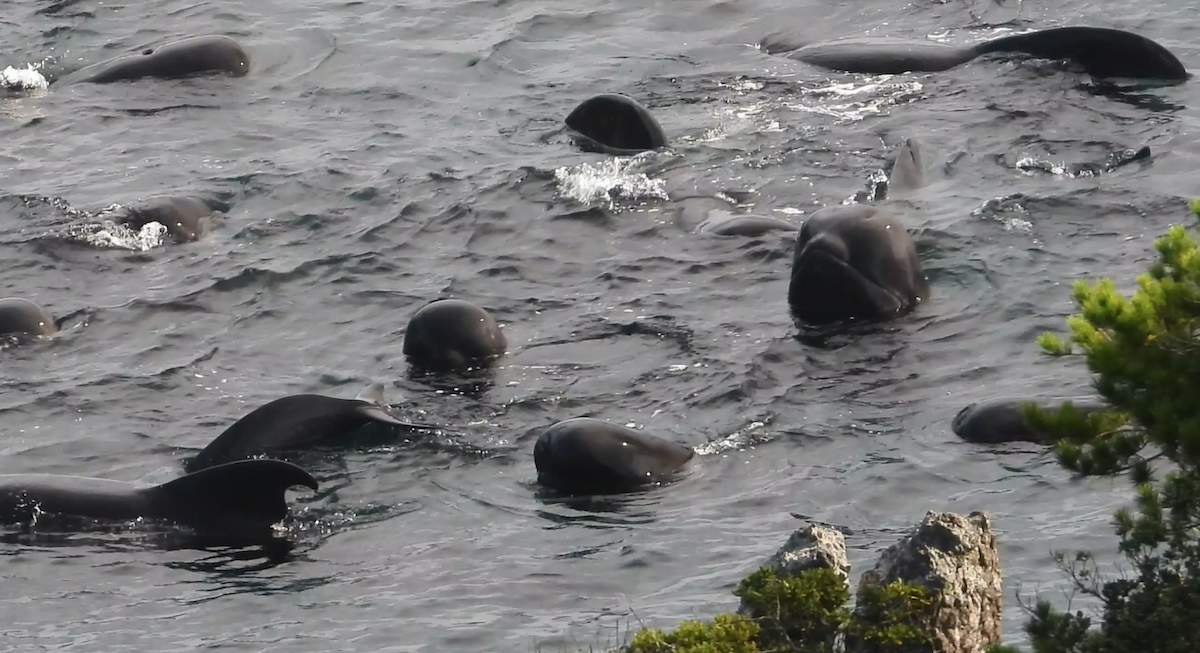 Pilot whales after being driven into the Cove, Taiji, Japan. Credit: LIA/DolphinProject.com

On September 11, hunters located a large pod of pilot whales, of which about 42 members, or about half the pod, were driven into the Cove. Dolphins of all ages and sizes were trapped within the multiple nets, their bulbous heads bobbing up and down in the surf. Surfacing and submerging, surfacing and submerging, this pattern continued all night long as the dolphins huddled close together, no doubt in increasing confusion, agitation and fear.

The following morning, the slaughter of the largest adults took place — parents and grandparents whose irreplaceable years of knowledge would never be passed along to juveniles were destroyed. In another layer of dissociation, the bodies of the dead were dragged past the still-living dolphins. This was repeated throughout the day, until the remaining dolphins were, once again, left in the Cove overnight. Day three saw the return of the hunters, who dragged the clearly terrified and struggling pilot whales under the tarps, where their flukes would be tethered until each life was extinguished.

Pilot whales are long-lived, slow to reproduce, and incredibly social. They tend to stay together in matrilineal family groups consisting of 15-30 individuals. They are believed to form intense bonds with each other, remaining with their closest family members for life. Some researchers believe pilot whale matrilines may have distinct dialects, similar to pod-specific dialects of orcas. Pilot whales are occasionally involved in mass strandings. Although causes for stranding remain unclear, family groups strand together. There are many things we are still learning about the details of pilot whale intelligence, but recent evidence has found that long-finned pilot whales have the highest number of neocortical neurons of any species known to date. 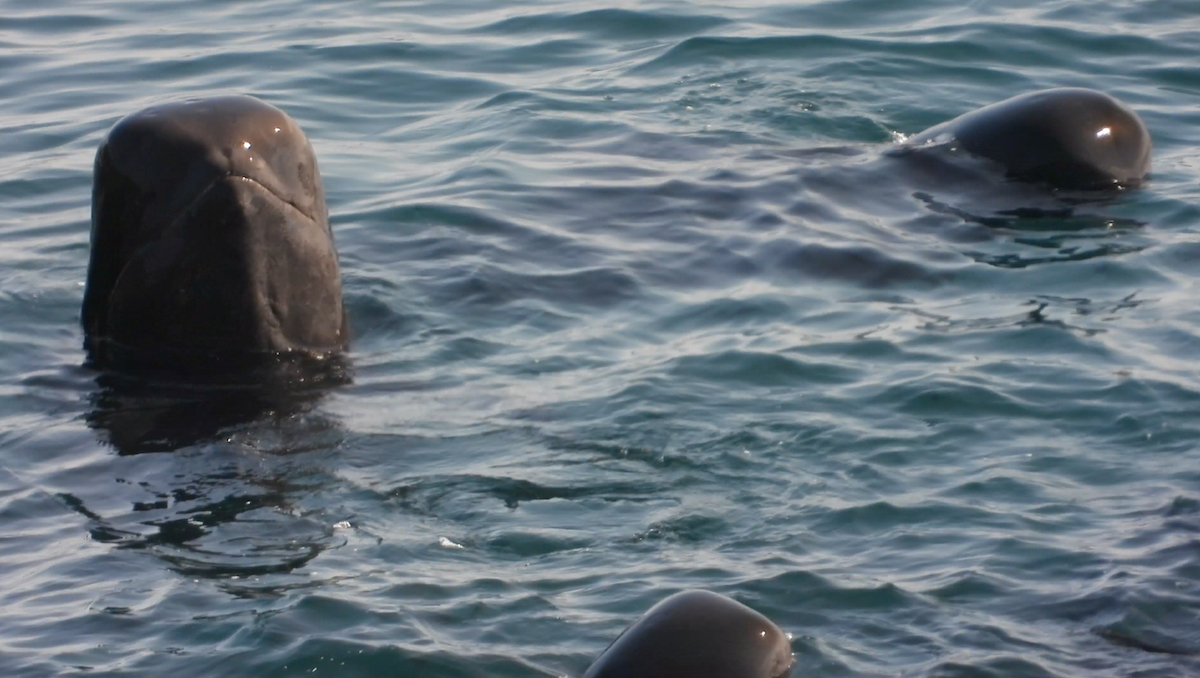 Pilot whales after being driven into the Cove, Taiji, Japan. Credit: LIA/DolphinProject.com

A few days later, another pod of pilot whales was terrorized by the hunters. They too, were driven into the Cove, where several members threw themselves onto the rocks in attempts to escape the hunters. It remains unknown whether they were the surviving members of the pod which was previously destroyed, or part of another group which tragically, would fall upon a similar fate.

As the waters of the Cove turned bright red, and loud sounds of tail slapping could be heard in the dolphins’ last, dying moments, the suffering these mammals endure at the hands of the hunters couldn’t be more clear. Long after the skiffs leave the tainted waters, filled with hunters who will soon make their way home, the echoes of suffering remain embedded amongst the numerous inlets in Taiji. What could have been a place of both serenity and wonder, instead, remains a place of horror. 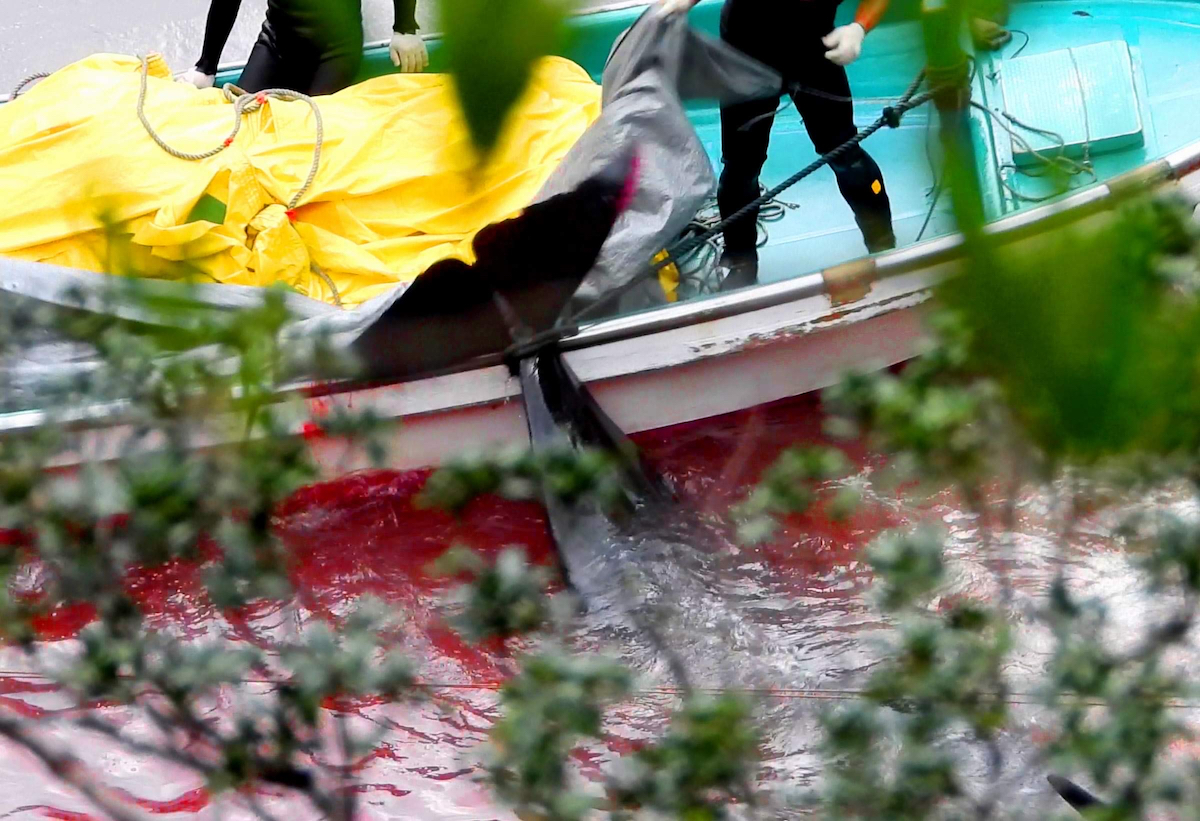 A slaughtered pilot whale is tethered by its flukes in the Cove, Taiji, Japan. Credit: LIA/DolphinProject.com

For the 2021/22 season, a total of 1849 dolphins across nine species including short-finned pilot whales, Risso’s dolphins, rough-toothed dolphins, striped dolphins, pantropical spotted dolphins, melon-headed whales, bottlenose dolphins, false killer whales and Pacific white-sided dolphins are legally allowed to be chased, harassed, slaughtered or taken captive. Once again for this season, Dolphin Project is collaborating with Life Investigation Agency (LIA), a Japanese NGO headed up by Ren Yabuki, dedicated to investigating, exposing and campaigning against the abuse of animals. We are also working alongside other Japanese-based volunteers, activists and NGO’s. Program goals are to document the hunts in Taiji, along with expanding anti-captivity educational programs throughout Japan.