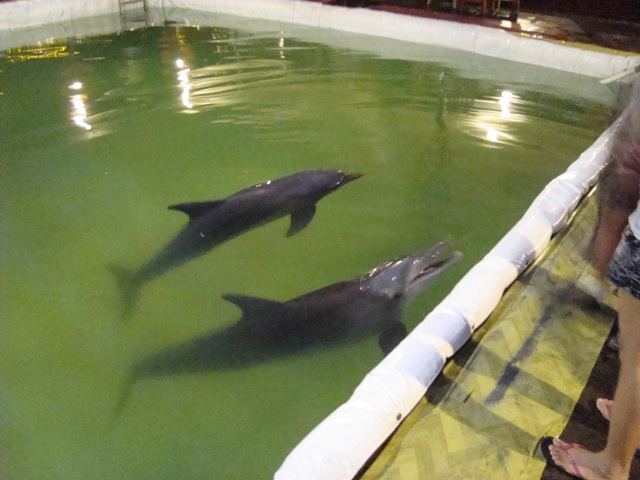 In some places in the world, dolphins are renowned for their intelligence, their grace and their playful demeanor. In some Indonesian fishing villages, they are valued for something quite different: their blood.

This unsettling discovery was made by one of Dolphin Project’s team, who spoke with fishermen and workers in processing plants in Lombok and Bali. It was learned that, due to the increasing value of shark fins, fishermen are catching and killing dolphins in order to use their flesh as bait for sharks – dolphin meat being preferable due to it’s bloody quality, which attracts sharks looking for their next meal.

A fisherman based in Kruak, Tanjung Baru reported that a single ‘good’ dolphin – meaning one that has been freshly killed, is of a good size and has not yet been butchered – will fetch between 500,000 to one million Rp. – or $ 9208 to $18416 US dollars. The incentives to kill dolphins are clearly quite high. Because the price of shark fins is on the rise, so to is the price upon a dolphins’ head.

The local government has informed the fishermen’s union and individual fishermen that they are not legally allowed to catch or kill dolphins due to their protected status. But some fishermen, eager to make a quick buck, are taking pains to avoid government regulations. They unload their catch of dead dolphins early in the morning, to avoid the prying eyes of government officers. It is also assumed that, in many cases, dolphins are caught at sea and butchered onboard the boat, their meat then attached to longlines that used to lure sharks. The remains of the dolphins are then dumped overboard, leaving no trace of the crime.

Despite the fact that this practice is illegal, it is a burgeoning problem. With the rising price of shark fins, an equally unsustainable product, fishermen will be motivated to continue to kill dolphins to supply the lucrative fins to foreign buyers. Ric O’Barry’s Dolphin Project will continue to monitor this issue and work with local groups, such as our partners the Jakarta Animal Aid Network, to ensure that no more dolphins are killed.

JAAN has also been busy in Bali. The organization helped to expose a local restaurant, called Akame, for keeping two dolphins captive in deplorable conditions. Presumably, the idea of watching dolphins while you dine is meant to convey luxury and indulgence, yet in reality it causes enormous suffering and legitimizes the use of dolphins as property, rather than allowing them to live out their lives naturally in the oceans.

Bali’s reputation of being Clean and Green is literally being soiled by the Akame restaurant, given that the water quality of the dolphin’s pool is so unclean that it has assumed a sickly greenish hue. Besides this, the pool is very shallow and the unfortunate dolphins are not fed enough to keep them healthy.

The infamous company Wersut Seguni Indonesia has reportedly supplied the dolphins to Akame. Wersut Seguni has been the target of recent campaigns due to their traveling dolphin circus shows, which comprise another appalling breach of animal welfare.

What makes the Akame restaurant all the more unreasonable is that there are abundant opportunities for tourists and local Balinese to view dolphins in their natural habitat. The eco-tourism companies who offer wild dolphin watching tours are truly upholding the image of Bali as being Clean and Green, as Femke den Hass, director of JAAN, points out in a letter to local decision makers.

Akame restaurant is single-handedly leaving a ghastly smear upon Bali’s international reputation as being a leader in eco-tourism and conservation. The local government should enact stronger protections for dolphins and rehabilitate and release these two suffering dolphins.