In Taiji, Wild Dolphins Refuse to Leave Their Captive Mates 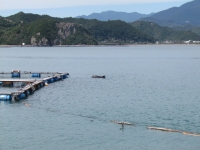 I have been in Taiji for almost ten days, and have luckily seen no slaughters so far, but I really felt like I was going to see one today. This morning, we headed out as usual at 5am and were at the harbor by 5:15am.  The sea was calm, and, as the sun was rising, I watched the banger boats as they started to leave the harbor.  I felt the same sinking feeling in my stomach that I had felt the last couple of days, hoping that they would have another unsuccessful day.

Two more volunteers have joined me in Taiji: Johanne and Camilla, two lovely women from Norway.  As we drove up to the point where we watch the drive boats go out to sea, we sensed that perhaps today would be an unlucky day for the dolphins, as the waters were so calm, and it seemed like a good day for the dolphin hunters to go hunting.

After about an hour or so we could see out on the horizon the boats forming into drive formation, and this is a sign that they have found dolphins.  My heart sank again as I watched in despair – we could see the boats working together chasing the dolphins erratically.  I kept thinking how frightened this poor pod of dolphins must be – fighting for their lives, this family that are peacefully migrating across the ocean, their home.  Suddenly, these unfamiliar boats, aggressively trying to take control of them and herd them into unfamiliar territory, attack them. It was like watching them play cat-and-mouse; one moment we thought the dolphin hunters had lost them, as the boats looked like they had given up, and the next moment, we could see them speed up again, and as they did black smoke would puff out of the back of the boats into the air, so you could clearly see that they were chasing a pod.

This went on for about three hours, and I kept thinking how exhausted these dolphins must have been, how panicked they must have felt. I kept thinking of the babies trying to keep up with their mothers, and how this pod was very likely to be driven in, some selected for a life of captivity and slavery while others were brutally slaughtered in the Cove.  We tried to keep our positive thoughts strong and hoped as we watched that somehow they would escape.

After an emotionally exhausting three hours or so, we noticed that the boats were coming back in.  They were too far away to tell if they in fact were driving in the dolphins, so we anxiously watched them coming in closer and closer.  As I was standing there watching them coming back in, I was waiting to hear the evil sound of them banging the poles on the boats that they use to create the wall of sound to trap the dolphins and keep them from swimming away.  I did not want to hear that noise!

The boats came back in with nothing! Amazingly, the dolphins had managed to escape, after more than three hours of chasing and havoc.  They did escape.

And the feeling that I felt of seeing those boats and dolphin hunters coming back with nothing, I will never forget.  The sense of relief was immense.  I then imagined this pod swimming free again far away and hoped that somehow they could relay the message onto the other dolphins in the ocean that will migrate past this place in the next coming months to stay away, stay away from Taiji…

While I am here in Taiji, I notice how lovely and polite the locals are.  We were at the harbor yesterday, and there were three old women sitting on the bench, right opposite where the dolphin hunters sit.  We had our cameras, and there was a good chance they knew what we were doing there – they could see we were taking pictures – but they smiled nodding their heads and acknowledged me so politely.  I think about how toxic the dolphin meat is and how dangerous for these people to eat, full of mercury.  Surely the decision to remove it from the local school lunch program was a serious decision to make, so surely that should mean it should be totally banned and not sold for human consumption anymore?

I have been visiting a place called the Dolphin Resort also, while I have been here. It is a hotel with a dolphin pool for people to swim-with and touch the captive dolphins, refugees from the Taiji dolphin slaughter. This place reminds me of a concentration camp for dolphins.  It is where formerly wild captive dolphins are held in sea pens, a sight that is difficult to see.

Yet, there are two dolphins here that are not in the pens.  They swim around the pens, and they are free to go, but they don’t leave. These animals now rely on the trainers for food, but also they will never leave their mates behind.  They would possibly not survive out in the wild on their own now anyway.

It is unbelievable to see the loyalty of these animals! They swim around the pens communicating with the other dolphins that are in the floating pens behind the nets. The Dolphin Resort employees are fully aware that the dolphins are not going to go anywhere, so they are just left to swim around the pens.

I am hoping that I will not see any slaughters for the rest of my time in Taiji. I love the sunshine, but here I hope for many, many windy, choppy days.