In Taiji, There is Never a Cruelty-Free Day

Home/Blog/Japan/In Taiji, There is Never a Cruelty-Free Day 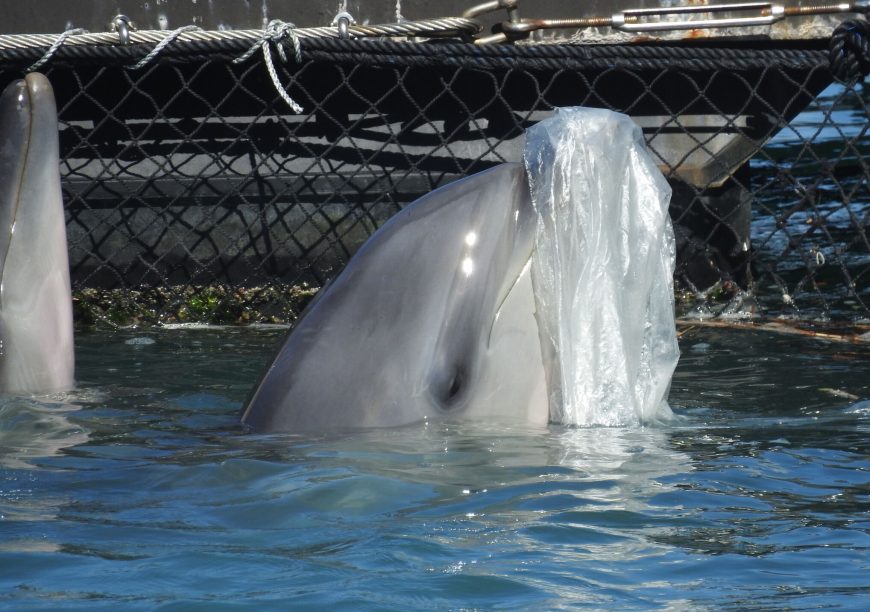 In Taiji, even on a Blue Cove day, dolphins continue to suffer.

At Dolphin Base in Moriura Bay, several small sea cages contain fragments of pods decimated during Taiji’s dolphin hunts, including bottlenose dolphins, Pacific white-sided dolphins, spotted pantropical dolphins and at least one pilot whale. The facility functions like a training camp for dolphins, with many of the forcibly-recruited mammals shipped to dolphinariums abroad.

Some of the countries that have purchased dolphins from Taiji’s drive hunts are China, Dubai, Russia, Turkey, Ukraine, Egypt, Tunesia, Mexico and of course Japan. They are trained to perform abnormal behaviors in exchange for food rewards of dead fish, and endless lines of people will pay to watch the dolphins perform and swim with them, without ever asking themselves where they came from. 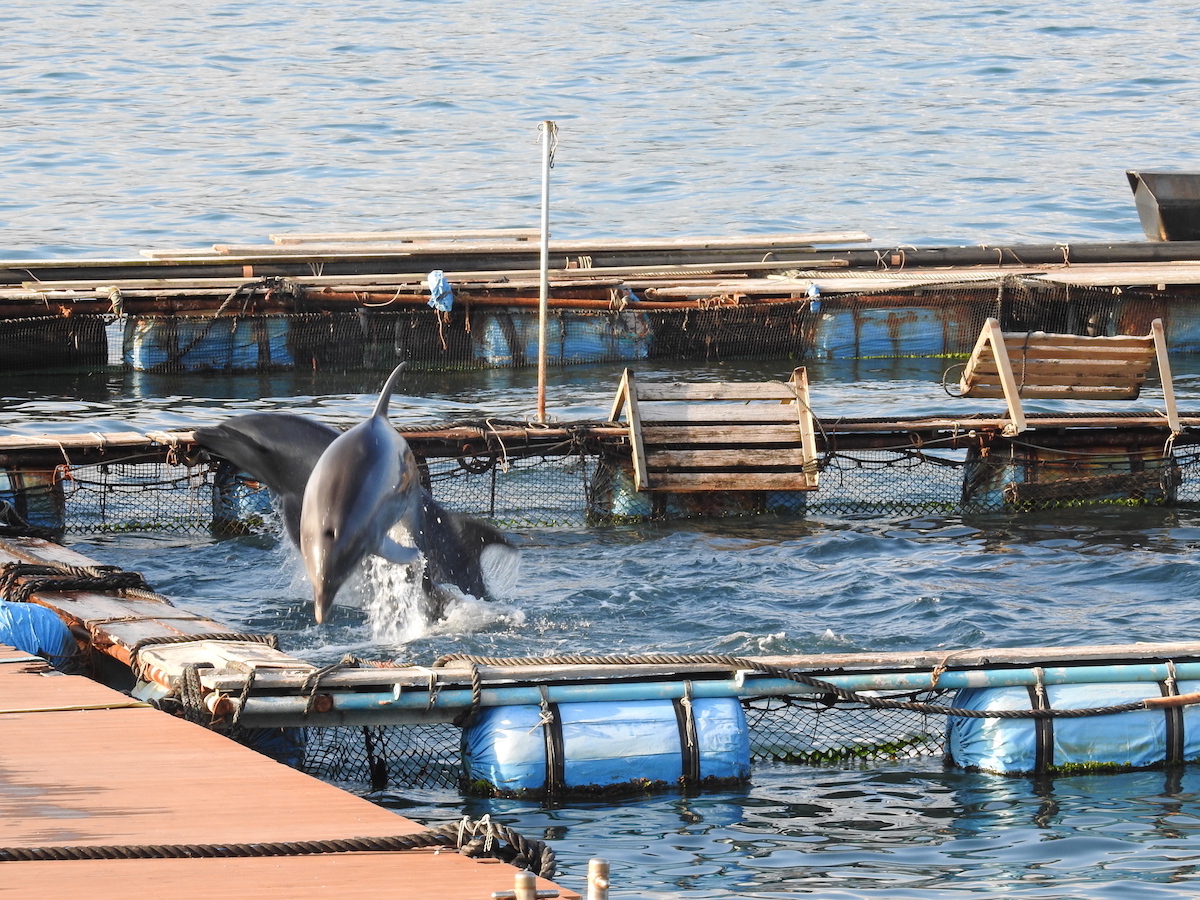 The dolphins at Dolphin Base languish in their cages, all day, day in and day out – with nothing to do and nowhere to swim to. Many have seen their pod members killed right in front of them, their pods mercilessly ripped apart by dolphin hunters and dolphin trainers who work side-by-side during the selection process.

In nature, dolphins live in a vast ocean world, filled with diversity and boundless activities. They have developed a number of sophisticated foraging techniques and when hunting let all of their amazing abilities unfold, including speed, strength, intelligence and the ability to communicate, working together and planning ahead. In captivity, these natural abilities are rendered useless, as they depend completely on their trainers for food. As such, they are powerless against the dolphin trainers’ use of control and in exchange for food rewards, are forced to jump on command, shake their bodies and spin around and around.

Some of the dolphins are very young, obviously taken from their mothers. They struggle with the tricks they have to perform, yet their trainers simply laugh, showing a complete lack of respect for the mammals and a calculated desire to transform these once gregarious opportunistic foragers into begging performers. Whenever a dolphin refuses to obey a command or does a trick wrong, the trainer simply picks up the bucket of fish and walks away. This is how a hungry dolphin is taught that humans are in charge. The trainers’ relationship with captive dolphins is all about power and control.

One of the bottlenose dolphins at Dolphin Base often remains motionless on the surface of the water, looking through the fence. The Pacific white-sided dolphins jump in their small cage, over and over and over, always ending up in the exact, same spot. For a brief moment, as they are mid-air, it looks as if they could jump out of their pitiful enclosure and escape. But they never do. And even if they did, where would they go? They would have to find their way out of Taiji harbor and then go look for their families. But it would be a futile effort, as their families are long gone, killed and sold as meat. 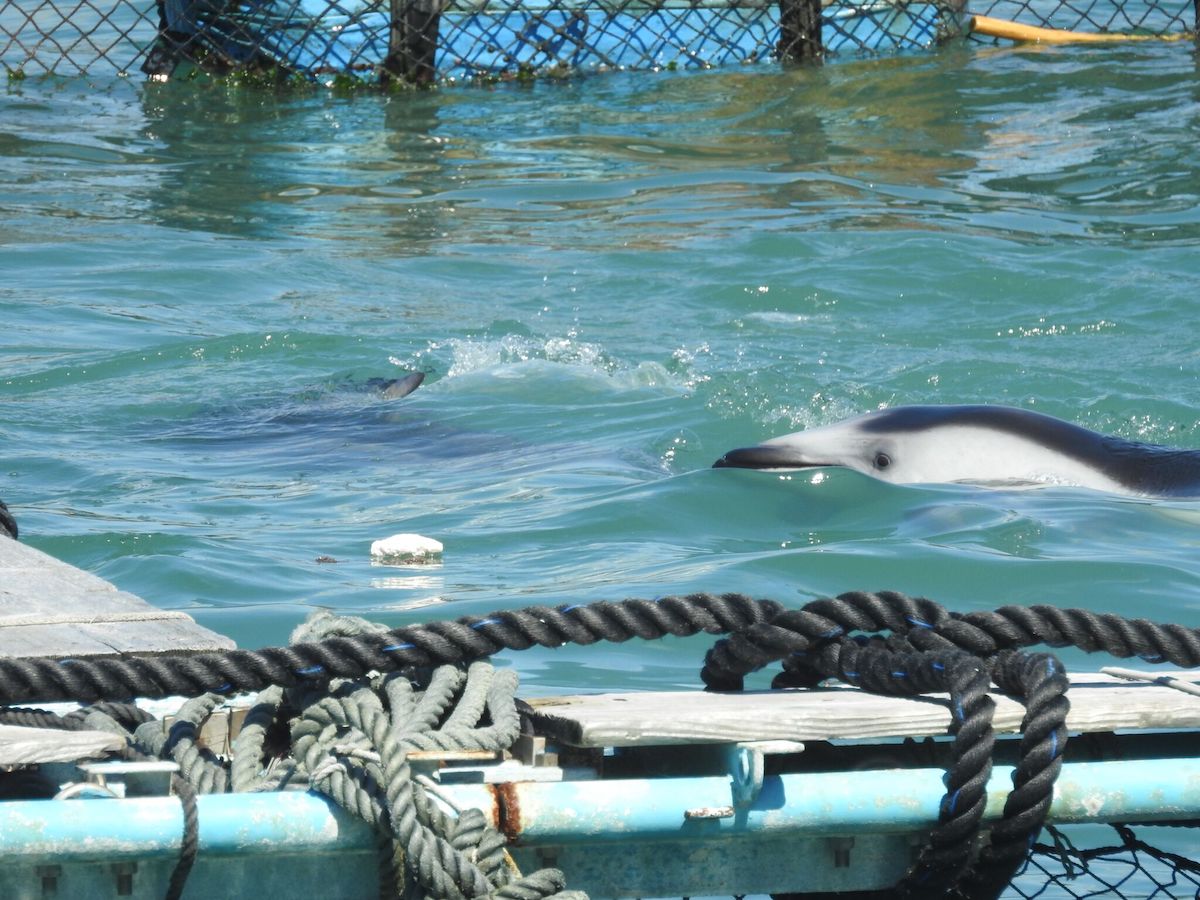 And so, for these dolphins, all hope is gone. I watch them for hours as they swim back and forth in their cages, spyhopping every once in a while as if to catch a glimpse of what is on the other side of the fence. At other times, they just lay motionless on the surface, and, if they are lucky, manage to find a piece a plastic or a leaf to play with. There is nothing else for them to do.

The dolphins that were captured during a recent drive-hunt are locked up in cages further out in the bay. It can take a long time for freshly-caught dolphins to start eating fish on their own, as they have just been kidnapped from their families, and are in shock. One can often see dolphin trainers force-feeding the dolphins by wrestling them into stretchers and pushing tubes down their throats and into their stomachs.

At the Taij Whale Museum several species of dolphins are confined in sea cages and concrete tanks. The dolphins that are used in shows perform four times daily. Visitors who pay an extra fee can touch a dolphin or take part in their so-called dolphin-training experience.

One of the bottlenose dolphins confined in the show tank keeps playing with a piece of fish. Three hours later, the dolphin is still playing with it. He or she must be saving the last food reward of fish after each show to have something to play with. The other bottlenose keeps stranding herself on the slide-out long after the show has ended, lying on the concrete for minutes at a time, then sliding back into her tank. She does this over and over again. The Pacific white-sided dolphins do tricks whenever a human being approaches their tank, hoping to receive a fish in exchange. They do not participate in shows as they are still being trained. Not yet mastering the ability to get the tricks right, there is something desperate about how they keep trying, spinning around as best they can, just to receive a fish. Their attempts at pleasing humans are futile of course, and they will stay hungry until their trainers decide it is time to feed them.

Finally, the trainers arrive with small buckets of fish. All the dolphins start jumping, waving their pectoral fins, spinning around and make squeaking sounds – all because they are hungry. For a captive dolphin, there is no such thing as a free meal. A fish is only given after the dolphin has performed a trick correctly. After the training session has ended, the two bottlenose dolphins in the show tank continue to perform tricks, but the trainers turn their backs on them and walk away with the empty buckets. 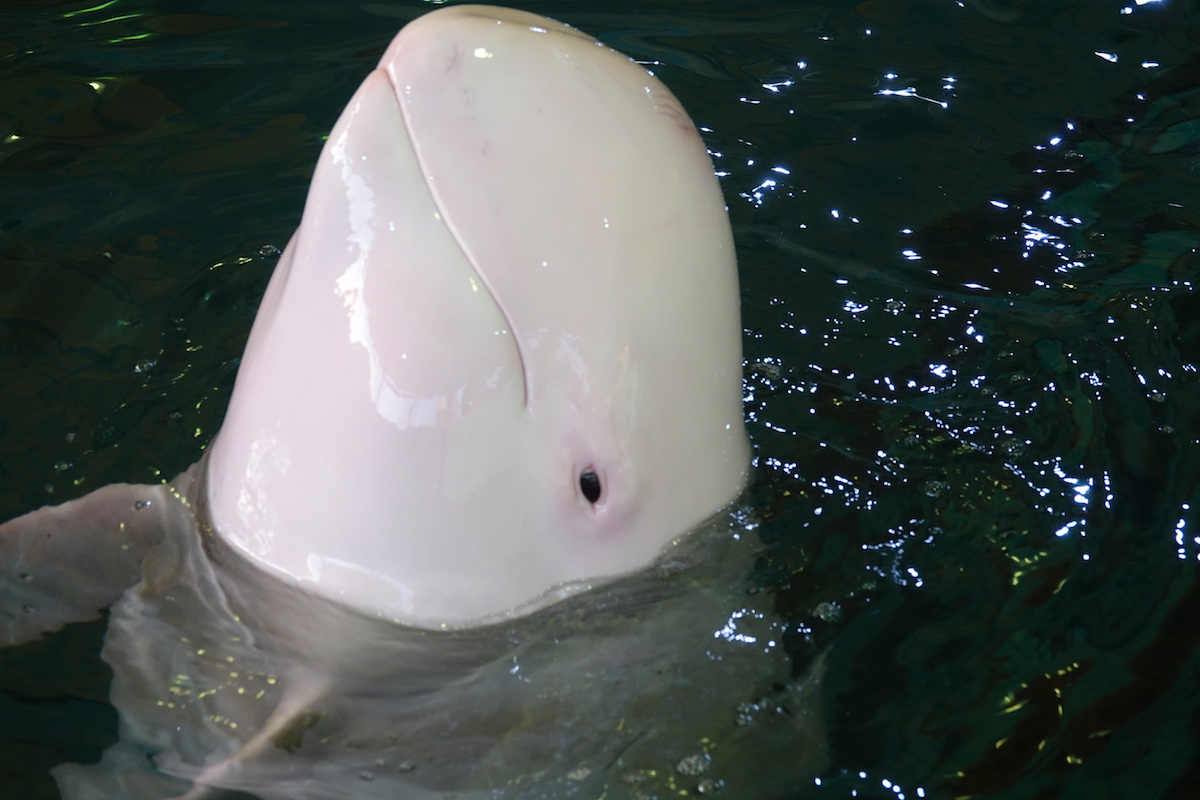 Albino bottlenose dolphin Angel and her tank mates keep swimming in circles. An albino Risso´s dolphin logs on the surface, eyes closed. This is their last stop in life. This is where their journey ends – inside of a barren and filthy concrete tank. Their deprived lives will be packaged by Taiji Whale Museum as entertainment until the day they die.

The captive dolphins in Taiji had real lives once. They belonged to families and spent their time foraging, navigating, playing, surfing, socializing, and exploring their ocean environment. Now they have nothing, and I feel an overwhelming sense of guilt when I leave the dolphinarium at closing time. I feel guilty because I get to leave – and they never will.

In the town of Taiji, dolphins are chased to exhaustion, captured, killed, butchered, cut into slabs of meat, consumed, subdued, wrestled into slings, dumped into transport crates, trained, force-fed, and incarcerated for life. They are subjected to every possible vicious assault that humans have been able to conjure up. And until their torture of dolphins comes to a permanent end, the Cove will never truly be blue.