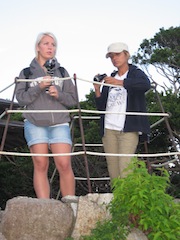 I’m here to fight against the cruelty of a cause that means so much to me and that has taken over a huge part of who I am and my life.

I’m here because I once fell in love with an amazing quote: BE THE CHANGE YOU WISH TO SEE.  After reading this, I understood that I was not supposed to be one who just closed my eyes and went on with my life, when something really hit me – hit me hard.  And this cause did!  I am in Japan because I want to be a part of a change I want to see.  I don’t want to be on the sidelines, saying how sad it is that this cruelty is going on, when I would rather be a part of this important change.

Many people probably look at me as an activist.  But I don’t like to be labeled.  Usually that word “activist,” unfortunately, has a negative ring to it for many people.  Not that I’m personally against anyone who calls himself or herself an activist.  But to me, I see my self as “active.”  Active to change something that I believe should not be allowed – active to end a crime against those who are innocent.  I want to be active instead of blank.  That is why I’m here, fighting for these innocent dolphins, every year.  Because to me, being passive and blank has never been an option!

Well, I’m sitting here at the airport hotel waiting for two of my fellow active friends to arrive, so we can head down to Taiji, and represent Save Japan Dolphins the best we can.  I’m so proud to be a volunteer for DolphinProject.com and Ric O`Barry.  If there is one person I really admire, it’s him: Richard O`Barry.  He can truly say that he is the change he wants to see.

And I am just getting started on my journey, so I one day can say that I am too; the change I want to see!