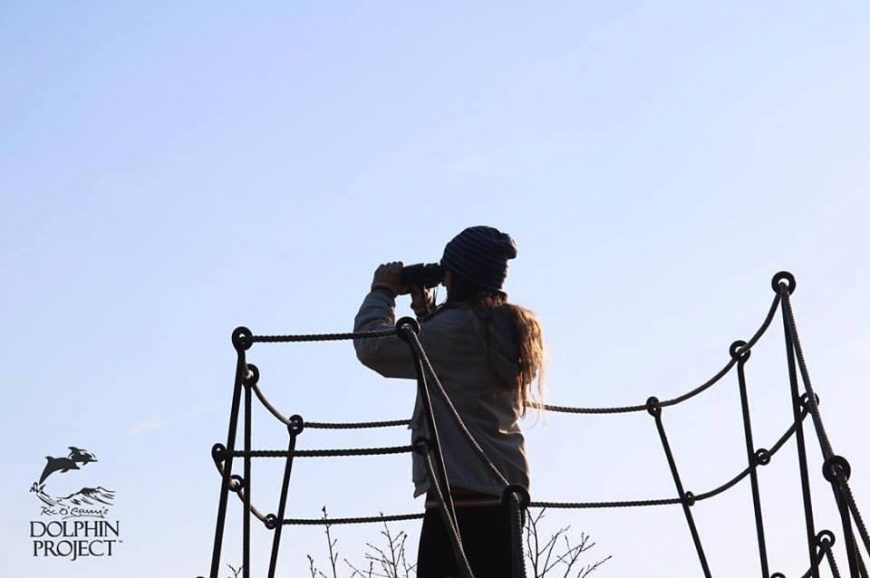 This past August, an image was posted to Facebook that shattered my heart: dolphins in bloody water trapped in a netted area, set against a stunning backdrop of striking cliffs and dark green foliage. I investigated and started following the dolphin drives in Taiji, Japan on the first day of the season, September 1st.

I quickly became invested in the issue, learning everything I could about Taiji and its connection to the mega money-making dolphin entertainment industry. I watched the documentary “The Cove,” which I had previously heard of, and read Ric O’Barry’s book, “Behind the Dolphin Smile.” Then, on February 5th, I left Los Angeles to travel to Taiji to be a Dolphin Project Cove Monitor.

Our job as Cove Monitors is to observe and document as the boats go out each morning at first light in search of dolphin pods. If there is a drive, we Live Stream for the world to see and to take action against this incomprehensible cruelty. We also monitor the dolphin pens that hold captives, noting any transfers or changes in status.

During my first morning, a formation started quickly. We grabbed our backpacks and drove to the cove, climbing the many stone steps to the top of the hill. It was one thing to have followed the drives on my computer for several months, but to be standing there bearing witness to what was happening below — to be that close to the dreaded action — was surreal. I was stunned that such extreme cruelty could actually be taking place in front of my own eyes.

As the drive neared the cove, I moved the binoculars between the hunters in the boats and the dolphins being chased. The terror-filled mammals were swimming as fast as they could as a unit, while the repetitive, chilling sounds of the banger poles traveled through the air. Underwater, the sound frightens and disorients the sonic-sensitive creatures. It is during the drive itself that many dolphins lose their lives from sheer panic and exhaustion.

Once the pod was netted in the cove, I watched as dolphins were grabbed by their rostrums, moved aside like worthless objects. I wanted to rush down and protect them, but I was not allowed to interfere. All Dolphin Project Cove Monitors act within the Japanese legal system, legally taking photographs, posting to social media, and videotaping via Live Stream.

The sounds of boat motors, hunters shouting, and radio communications assaulted the dolphins. They huddled together, and within moments, were dragged under the tarps and slaughtered. Next came the thumping sounds of dead bodies as they were thrown onto skiffs. These highly-intelligent, self-aware beings, possessing their own complex language system had just been wiped out. There are several parallels between humans and cetaceans. But to the Taiji hunters, dolphins are dollar signs, meals, and pests.

On day four, an aggressive capture selection of bottlenose dolphins took place. I watched in horror as a few panicked mammals were run over by skiffs, all caught on Dolphin Project’s Live Stream. In the end, six dolphins were hauled away for a life of captivity, the slings carrying their bodies knocking against the sides of the boats. The rest of the pod — stressed, confused, exhausted and fragmented, was driven back out to sea.

While the slaughters are heart wrenching, the capture aspect is equally devastating. The knowledge that dolphins are separated from their families and confined in small sea pens, medicated and force-fed dead fish, made to learn shameful tricks for food, then shipped away to be exploited for entertainment, is in some ways harder to bear.

With the ocean just out of reach, a freshly-caught Pacific white-sided dolphin is being prepped for life in captivity, Taiji, Japan.
Photo credit: Dolphin Project

From the statues and murals of dolphins and whales suggesting they are a celebrated local symbol, to the brutal slaughter and capture selection in the cove, Taiji is a town of contrasts.

This experience will stay with me forever. And along with it, my commitment to do my part to help bring an end to the horrors there.

Together we CAN end the madness!