Impressions from a New Cove Monitor

Home/Blog/Japan/Impressions from a New Cove Monitor 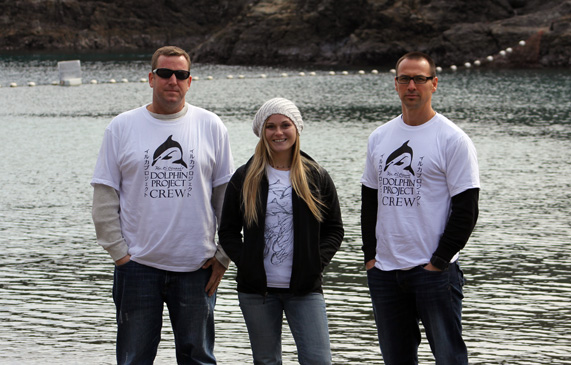 (NOTE: Becca came as a volunteer with me and many others to Taiji on Sept. 1st, 2011, the first day of the hunt season.  She had used her money she had saved up for an Australian vacation to come to Taiji with Dolphin Project instead.  She wanted to come back to be a Cove Monitor during the hunts.   She raised the funds herself and has spent eleven days in Taiji with Dekin and Tim Burns.  Today, she headed for home.  I asked her to write up her impressions. Today, the hunters were unable to find any dolphins.  – Ric O’Barry)

Feb. 13, 2012 – The best words to describe my relationship with this place is “Love/Hate”, plain and simple.  As much as I hate the atrocities that occur in the Cove of this small, sleepy town of Taiji, the experience of Japan is much greater than that.  People tend to throw out the notion that it is all of Japan we should be scolding, and for awhile my thoughts were along the same lines.  When in reality, aside from the 26 fishermen (dolphin hunters), I have experienced nothing but open arms and kind accommodations.  Now, that doesn’t mean that there aren’t people here who aren’t exactly thrilled about our presence, and we certainly get our fair share of interesting looks, but none that I’ve personally felt threatened by.  The police here, both Wakayama and Wakayama Prefecture, are fantastic and treat us with the upmost respect.  To get respect, you must give it.

I came to here with a mediocre camera, a pair of old binoculars, and an ancient laptop.  Not exactly prepared and didn’t necessarily capture half of the footage and photographs that I could have, but this was very much a learning process for me.  Besides coming here for a few days in September for Save Japan Dolphins’ annual Dolphin Day on the 1st, I had barely gotten a taste of what Taiji really had in store.  The hunters also delay their season around that time with all of the media attention and what not.  Not to mention that Typhoon Talas impacted the start of their season quite a bit; this was bittersweet news. Being back here several months later, the destruction of Typhoon Talas is still tremendously visible and heartbreaking.

Three slaughters in 11 days.  In the midst of arriving here, trying to settle in and being hit with the overwhelming distress of culture shock, the first day out Dekin and I witnessed our first slaughter, ever.  We woke up that morning and drove down with Tim Burns to see if the banger boats were heading out, and sure enough they were.  That sight alone is enough to make your stomach drop.  We dragged our feet up to Promontory, the cliff where we stalk the boats to see if and when they appear to be in drive formations.  Within an hour the fishermen were driving in a large pod of striped dolphins.  Adrenaline immediately kicks in, and it’s a dash to Mount Takababe, another cliff that has a view point of both the harbor port and the best sight into the Cove.  Seeing the dolphins driven closer and closer to shore was a surreal sight; by the time they reach the outskirts of the Cove they’re so exhausted.  They’re corralled into a general area, continuously netted off until the entire pod is cornered into one spot, making it easier for the fishermen to push them under the tarps to be slaughtered.

Panicking, the striped dolphins use whatever energy they have left to fling themselves onto the rocks in acts of desperation, often cutting themselves up in the process.

Once all the dolphins are out of sight under the tarps the last things you can hear is the frantic slapping of their tails and then silence.  As much as I wanted to scream, cry, and just flat out jump down into the Cove myself, I was frozen.  Suddenly, I was startled by alarmingly loud “thuds”.  When I looked at Tim for an answer, he explained to me that it was the sound of the fishermen throwing the bodies onto the skiffs.  Shivers shot down my spine, and I discovered my least favorite sound in the world.

Every slaughter seems harder than the one before it.  Before I came here I was uneducated on what kind of dolphins the fishermen typically hunt for and which ones are more or less valuable to them.  Obviously bottle-nosed dolphins are a real treat for them captivity wise, but I’m still learning the species; I’m by no means an expert!  On February 8, the slaughter of the Risso’s dolphins was yet another morning that happened relatively quickly.  I’d never seen Risso’s before, and I noted their emotional distress was significantly different from that of a striped.  Risso’s put up much more a fight, and the scars on their bodies are proof of the rough housing, not mention they are greater in size.  However, once netted off in the Cove their demeanor swiftly changes from aggression to helplessness.  Several times we witnessed them sitting up vertically out of the water, popping their head out and just bobbing there for several moments.  It was as if they were pleading for help.

The last slaughter to witness on this trip was February 12, yet another striped pod.  The morning of this slaughter was by far the longest.   The banger boats kept disappearing on the horizon, and for the longest time we had lost sight of them.  With 10:30am rolling up fast we were feeling hopeful that the dolphin hunters would be giving up and heading in soon.  To our dismay, after taking our eyes off of the horizon for a mere 30 seconds, we peered back up and saw 9 banger boats all in formation powering back inland.  I kid you not, it was like something straight out of a movie.  We all sighed a breath of disgust and high-tailed it over to Takababe once again.

While standing in that small view sight of the Cove, we watched and listened for the remaining sounds of the slaughter, and then finally saw the blood slowly pouring out from under the tarps as one skiff scooted away.  However, Tim saw something I didn’t.  I watched him run over to a different vantage point on Takababe.  I tried to see what exactly he was frantically taping and once he played it back to me on video I was beyond sickened.  Three juvenile dolphins all under the tarps flopping in horror were being driven out and thrown back into sea.  Why?  Without their mothers, how will they survive?  Also, from the looks of it, they were no longer in the greatest condition after being thrown around and sat on.  There is absolutely nothing that can quite prepare you for this kind of thing, let alone trying to explain it to others.  Heart wrenching doesn’t begin to describe it, and it all hits you real bad.

I want to stress that our goal here is to continue to keep the pressure on and to keep getting the word out.  With that said, if you are reading this and it truly upsets you: Repost it. Share it. Don’t buy a ticket at Sea Aquariums with dolphins or small whales.

Our relationship here with the police is great, and I hope it can continue this way.  Our cooperation means a great deal to them and shows we’re not a threat, but genuinely appalled by the dolphin hunts.

I will be returning to Japan next season without a doubt and every year that I can until this comes to end.  I am so very thankful for the people that I’ve met along this process, and they will forever be considered part of my family. A giant thank you to Tim Burns and Ric O’Barry’s Dolphin Project as well.

This trip imprinted me even more than I thought possible.  Swim free beautiful dolphins; I’ll be back soon!

Tim, Becca and Dekin on the shore of the Cove.