Hope and Tragedy on My Last Day

Home/Blog/Japan/Hope and Tragedy on My Last Day 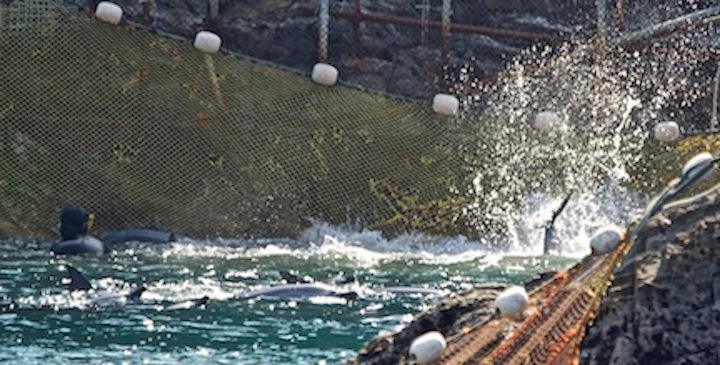 My final day in Taiji wasn’t what I had hoped — what we interested in ending this “cultural tradition” would hope wouldn’t happen.   I would like to go back a couple days, since before you read of my experience then, I do want to shed a light of hope and describe a little about what can happen on the days the Taiji dolphin hunters return empty handed.

On Friday the 8th, I showed up at the harbor and noticed some unusual activity at the harbor pens.  All the fishermen and trainers were present and concentrating on the pens.  A couple dozen small thermos containers, obviously with “special fantastic magical” fish – allowing the captive dolphins to accept their new reality a bit easier? – were being dosed.  Fishermen were pulling up the nets revealing exactly why the dolphins cannot just swim under the nets – because the nets are more like a bowl – they are five-sided cells.

Always on our mind are the dolphins that don’t make it past this period of time, and for two dolphins sadly that situation was very true.  They often do not take the sick/dead dolphins to butcher house.  Instead they take them out for a sea burial.  Just dropped without a care in the world about the lives that have been destroyed.  Another two dolphins were moved, which was very interesting.  They are able to slip them out of one pen and into another directed by the divers.  All of this took a few hours, and that ended a dolphin drive fishermen’s day.  I call it: “Taking Care of their Pot-O-Gold.”

Saturday the 9th was a very special day in Tokyo.  Japanese activists had organized another demonstration!  I took the train Friday for a good 6-hour trip and stayed the night.  Still on Taiji time (waking at 5AM), so I was able to watch the sunrise thinking the demonstration will be something all of us want to see from Japanese people.  It maybe the signal that a growing trend in Japan: Standing up for what they feel is wrong, even if it was a “cultural heritage” tradition.  We all must be reminded that Japan was not the only nation to engage in whaling.  Ending this tradition in Japan requires a spark.  We are seeing that spark emerge, and I am so proud of the people organizing this and all that joined the demonstration in Tokyo against whale and dolphin killing.  Many of us non-Japanese citizens joined to be part of this spark and to encourage them to continue the cause.  No pro-whaling opposition was present nor did we receive any negativity through the entire walk through one of the busiest areas of Tokyo, including the busiest intersection in Tokyo: Shibuya.

Immediately after the demonstration, I wanted to return back to Taiji, just in case the boats went out the following morning, which meant an immediate taxi to the train station and another 6-hour train journey to return.  Saturday is generally the drive fisheries day off, so boats did not go out, but on Sunday anything can occur.

I had unfortunately returned the car prior to leaving for Tokyo, which meant no car until the rental place opened for business.  I waited until 8AM on Sunday when the rental place opened, but no car could be had!  I had already heard that the boats did go out this morning, and I didn’t want to wait till 9AM for the other rental places to open, so I grabbed a taxi into Taiji to the Whaling Museum, which is very close to the Cove.  I waited and watched as boat after boat came back empty handed…

Was thrilled, and I walked to the harbor just to be sure and to see if any other activity was happening in place of a drive.  If you have seen photos of the harbor pens for captive dolphins, clearly they are not the greatest structures, and recently a few makeshift additional pens were slapped together.  This day turned into a craftsmen day with two new pens built to hold even more captive dolphins.  Their “Pot-O-Gold” is growing this year and more cells were needed!

According to CetaBase, an estimated 240 dolphins have been kept for captivity so far this season, as of Feb. 5th.

No matter what these men and women do here in Taiji concerning dolphin and whale BUSINESS, it is never really a “good day.”  Inevitably, they will go back out, they will take more captive, and they will kill more.

The drive boats left harbor.  Taiji hunters apparently don’t care if this is my last day here, nor do they care about any other anti-slaughter individuals’ last day either.  Many of the people I’ve met here have had their last day marred with a bad lasting memory.  So it was for me, a lasting recurring flashback since the minute I left Taiji.

I watched the drive formation on the horizon, observing the boats creep closer and closer, waiting to see the pod running for their lives, and wanting to see nothing instead.  A Japanese couple was standing at top of the viewing platform on the ocean overlook, looking at the horizon.  I told them the boats they see are driving dolphins, and the women gasped. Then I told her “for eating” and motioned with my mouth so she understood.  Another shocked gasp.  She then repeated “Dolphin?”  I said “Hai, Yes.”  Even with a whaling history here, it still shocks the Japanese people that it is still going on.

I read an article about whale meat used for school lunches.  This is STILL going on here.  As the article described it, it is a cultural special lunch day, and the children enjoy it.  AND they do know about the mercury content.

A very large pod was being driven into the Cove, and I decided today that I would stay in the Cove area near the beach instead of going up the hillside next to Cove.  To my horror, although what can be viewed is different, the slaughter is just as bad if not worse.  Clearly the count of striped dolphins was very high, possibly 90 to 100.  No trainers, just divers and killers in the cove.  The realization that none of the dolphins were going to be chosen for captivity and at least stay alive washes over you with such dread – you just feel sick inside.

Now watching wave after wave of dolphins trying to escape, receiving what I can only assume are very painful injuries from the sharp rocks, and seeing the bloody trails where dolphin snouts drag along the yellow tarps.  Hearing the strained gasps for air as they are so tired they are just spy hoping almost motionless in the bloody water.  Watching the water splash in torment as the last effort to free themselves is soon ended.  So very many dolphins just sitting in the water, their snouts to the air all in the same direction – clearly they can see each other’s eyes – knowing exactly what is happening to their large family.

Some of the dolphins were coming right up to the nets separating the killing beach from the holding area, wanting to help and having no power to do so?  Your heart is breaking witnessing this atrocity, and you feel exactly the same: No power to change the outcome.

The dolphin killers were having a good laugh, driving over the remaining dolphins with careless disregard, outboard motors aimed at a few and ushering another group into the killing beach under the tarps.  Skiffs were leaving slowly, very low in the water, completely packed with lifeless dolphin bodies and completely covered by tarps.  They were hiding their shame.  Still cannot understand the concept of “whaling tradition” and being proud of that, continuing it, and then hiding it from us?  So it would be more damaging having photos of dead dolphins?  But if this is something you are proud of, why hide it?

The remaining dolphins are now sharing the water with the blood from their family members, and it is more red then I have seen since I have been here.

We are not alone here in the Cove.  Hearing a couple of locals laughing behind my back, I tried to ignore it, and then I decided to turn around, only to find a local Japanese video recording us.  I have read the extreme nationalists like to do this.   They assume we don’t like to have web pages devoted to our presence here and our names made public.

I heard later that the last remaining dolphins of the pod were released, which is not very comforting since I know they were in no physical shape to survive well after all that trauma.  Why I left before knowing a final result bothers me.  Honestly, I just couldn’t take any more – my level of witnessing these horrific actions had reached a maximum.  My emotions were running very high and difficult to contain.  I just couldn’t see the remaining pod members be killed – but they are with me in my thoughts.

I had a long train ride back to Osaka, cannot get the images out of my head, with sadness overwhelming me at times.  On my way back to California via Hawaii, I saw a pamphlet with a few dolphins jumping together, clearly free and having fun.  I picked it up and just felt that wave of deep sadness roll over me.  I will never see a dolphin or whale picture the same way again.  I will always be haunted.