Hollywood Can Do Better 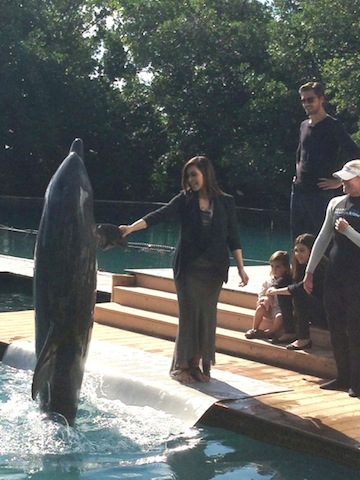 Several movies and programs have appeared recently that have brought stars into contact with captive dolphins, as if such activities had no consequences.  Some stars have had photo sessions at the Miami Seaquarium, SeaWorld and other marine parks with captive orcas and dolphins.

Most recently, Kim Kardashian and her family were “introduced” to a trained dolphin, as if the dolphin had any choice.

In many cases, children were brought by their Hollywood parents to see captive dolphins and shows.  This is not just dolphin abuse, but child abuse.  The children are being taught that it is OK to keep these magnificent animals in captivity for personal use, without thought as to what the dolphins feel or need.

Hollywood can do better.  All producers, directors, screenwriters and stars should watch The Cove.  And they should then take the pledge — Don’t buy a ticket to shows with captive dolphins and whales, and don’t promote swim-with-captive-dolphin programs.

These captive programs separate dolphins from their families and their ocean environments, so they spend a lifetime in cramped quarters, eat dead fish, and perform circus tricks for us, the public, who so misunderstands them and their needs.

How would stars like it if they were put in boxes, only to be brought out to perform daily shows, doing dumb tricks, and then be paid by dead fish for dinner?  Why do we treat these intelligent and family-oriented animals as if they were toys?