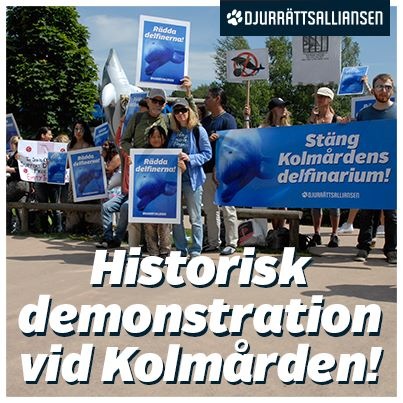 The protest on July 5th in front of Kolmården Wildlife Park in Sweden was a big success.  More than 150 people showed up to protest Kolmården´s captive dolphin spectacle.  Dr. Mats Höggren, who is the zoological head of the park, noted that Kolmården is “not used to this kind of attention.”

Since 1993, Daniel Rolke, who is founder of The Animal Rights Alliance in Sweden, has worked tirelessly to expose the plight of the dolphins at Kolmården. The dolphins are trapped in indoor chlorinated tanks all year round, and at least 56 dolphins have died here since the dolphin exhibit, named Marine World, opened in 1969.  Among the causes of death are pneumonia, fungus infection, severe anemia, emaciation and collision with pool.

Today, just ten surviving dolphins remain at the park.  Three of them were captured from the wild.  Seven were born in captivity, and even though they have never chased a live fish or seen the real ocean, Kolmården continues to promote them as “ambassadors” for their wild co-species.

Kolmården Wildlife Park is located in a remote area of Sweden, and all of the protesters had travelled for hours to get there.  Swedish media showed up to document the event.  The protesters reached millions of people with the message that dolphins do not belong in concrete tanks where they are controlled with food to perform silly tricks just to amuse large, paying audiences.  The protesters also urged Kolmården to stop its unethical captive dolphin breeding program, which supplies dolphins to dolphinariums within Europe.

Kolmården´s captive dolphin show consists of the usual deceptive circus camouflaged as education and conservation.  “The dolphins in our care serve as an important tool to teach the public about conservation of the oceans,” was the message.  During the slick Las Vegas-style show, the dolphins played ball and took their trainers for rides across the tank.  Each time they had performed a trick correctly, their trainer blew a whistle, and the obviously hungry dolphins hurried to the edge of the tank for a food reward.

The day before the protest, Ric and I had a meeting with Dr. Mats Höggren and Mats Amundin, who is Research Director at Kolmården. As expected, we fundamentally disagree on the educational value of the captive dolphin spectacle.

We did, however, find some common ground regarding the issue of the annual dolphin slaughter in Taiji, Japan.  During this slaughter, some of the most attractive dolphins are selected and removed by members of the captive dolphin industry, while the rest are killed in a tremendous blood bath and butchered for their meat.

This is important news: To our knowledge, this is the first time a dolphinarium has promised to do this.  Kolmården has gone on record in the Swedish national media regarding their position to JAZA´s membership of WAZA.

You can see some of the demo (in Swedish) on this telecast.  Ric is interviewed in English at 5:18 minutes into the story.  (And that is Ric’s daughter mugging for the camera beside him. )

Our thanks to Daniel Rolke for organizing the protest, and to all the many people who showed up!  We believe we are making strong progress in Europe against the captive dolphin industry.
Photo courtesy of Djurrättsalliansen/The Animal Rights Alliance, Sweden.