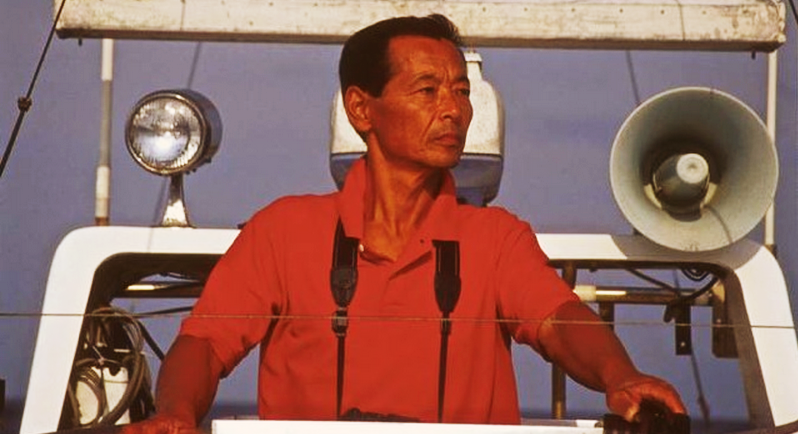 If there’s anyone who truly knows the price of the Japanese dolphin slaughter, it’s Izumi Ishii of Futo, Japan.

A former dolphin hunter himself, the hunt is in his blood. His father made a living hunting the dolphins, and his grandfather before him.

In a dolphin hunt, also known as a dolphin drive, the gentle creatures are cornered, trapped, and hauled away to be used for food and shipped to aquariums. The Japanese government permits a certain number of dolphins to be killed every year. It’s a lucrative business for fishermen, many of whom, like Izumi Ishii’s family, also view it as a tradition.

But, in 2002, Ishii ditched the cruel practice after a killing he’d never forget. As he held his prey in his hands, he saw a tear fall down the dolphin’s cheek. Ishii knew he couldn’t continue to sacrifice these serene creatures for his own profit. So he challenged himself to stop the hunt in Futo entirely.

And the way he did it was totally genius. He launched a dolphin and whale watching business, operating on his beloved boat Kokaimaru — right alongside the area where dolphin hunters would conduct the commercial killings.

With so many curious eyes on their heartless work, the hunters weren’t able to justify the slaughter. So it last went down in 2004.

Still, every year the fishing union votes in favor of the hunt. So if they wanted to start it back up, they’d legally be able to.

Izumi Ishii’s work is symbolic of a larger effort to end dolphin abuse forever. Since he’s a former fisherman, it’s all the more impressive to see how he turned everything around to fight for the dolphins.

Now, he runs Bright Sea, an organization that works tirelessly to end the dolphin drive for good. He speaks at universities in Japan, campaigns to make sure Futo won’t ever be able to restart the hunt, and collaborates with others who are passionate about ending the slaughter, like Ric O’Barry of Dolphin Project. Ishii believes that running a dolphin watch business is a worthy alternative for former hunters, who need a source of income to support their families. Dolphin hunting only benefits the fishermen, and the bloody process scares tourists away. But dolphin watching benefits the whole community, as people come from all over the world to observe the creatures. Right now, however, by shouldering the burden of both teaching people about and watching the dolphins, Ishii’s struggling to pay the bills. His expenditures far outweigh his income, and it’s essential that the business stay afloat — if nobody’s watching, who will stop the hunters from restarting the drive in Futo?

If Ishii can’t get the money in time, the bank will confiscate his assets, including the boat and everything else that keeps the dolphin watching expeditions up and running. We can’t risk the possibility of Futo’s fishermen restarting the hunt. And if Ishii’s boat isn’t able to go out to check on the dolphins, it’ll be easy for the hunters to bring back the drive.

Please share this story, and take action to help Izumi Ishii and Bright Sea eliminate the dolphin hunt — for good.