The following blog was written by guest blogger and activist in Argentina Dalila Lewis.

This past October has been a whirlwind of emotions for marine animal rights activists in Argentina.
For over a year and a half my fellow activists have been working on drafting a bill — Kshamenk Law — to prohibit shows with marine animals, their captivity and reproduction, and to stipulate a time limit to rehabilitate each individual from the aquariums Mundo Marino, Aquarium Mar del Plata and Pekos Cordoba via their transfer to sanctuaries. This is a criminal and national bill which stipulates prison sentences for those who commit these acts throughout the Republic of Argentina.

For 30 years, Kshamenk has been in captivity at Mundo Marino, the largest aquarium in Argentina, 22 of these years (since 2000) has been spent alone. Between the 2nd and the 9th of October, videos of his current state of health circulated on social media, attracting attention and concern throughout the community. Activists entered Mundo Marino and were able to corroborate that Kshamenk had indeed lost considerable weight, and that his time in the show had been reduced. Outside experts said that based on the photos, it was possible Kshamenk had a condition called ‘peanut head’, a loss of fat around the back of his neck, which could be due to malnutrition or one or more advanced diseases.

Immediately the lawyers of the Judicial Team Sandra and Mauricio Trigo acted, sending a formal letter to Mundo Marino and to the Ministry of Environment and Sustainable Development of Argentina, requesting an updated and detailed report on Kshamenk’s state of health. To-date, none have responded. 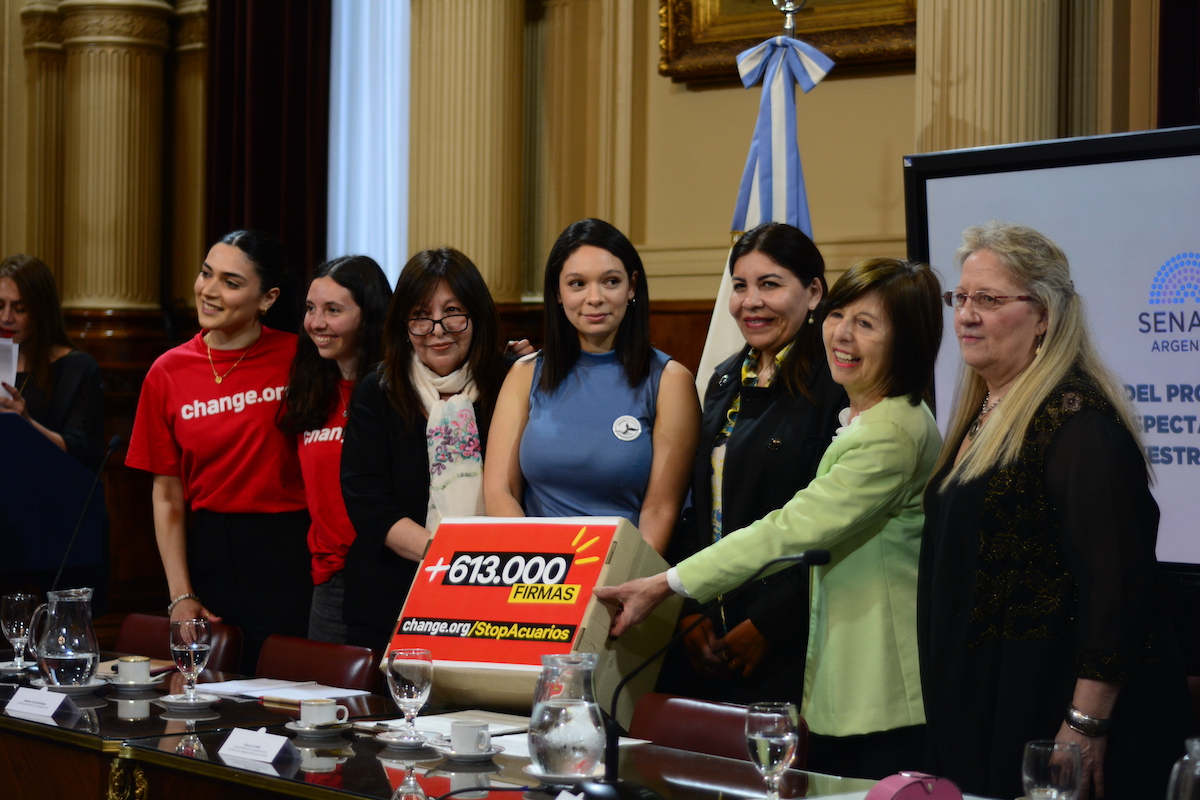 Activists fight for the rights of captive dolphins and other whales, Argentina

On the 18th of October, the bill was presented in the Argentinean Senate at the initiative of DAM, Derechos Animales Marinos and Senator Nora del Valle Gimenez. In this event that took place in the National Congress, the most important points of the law were presented and there was a recognition of the work of activists, lawyers and organizations that have been carrying this cause forward for more than 10 years. Words of support from international organizations were shown on a large screen, as well as videos that illustrated the presentations. Also it was discussed the legal aspects of the bill, celebrity support campaigns, activism under Empty the Tanks, and the support of the more than 618,000 signatures on the bill.

“Captivity is an activity that only human beings can do. It is the deprivation of freedom of non-domestic animals by appropriating only their bodies because in the very act of locking them up in cages or aquariums, bags, wardrobes, zoos, private collections, fashion shows, in that very act we rob them of their dignity. The deprivation of freedom is imprisonment. It is incredible that if we cherish our freedom, we cannot understand that animals also cherish theirs and even worse that we have naturalized their captivity. We need legislative changes, we need civil servants, legislators, judges, teachers, society as a whole to change the archaic paradigms of reification, the archaic paradigm of anthropocentrism, of spectacularized violence of profit at the cost of suffering, to put an end to the naturalization of all that which is doping consciences and annulling our critical observation. Legislative changes to transform the relationship with animals, to respect the right that has no defense. The sciences and the fields of knowledge converge in the need to take this step.” ~ Judge Helena Liberatori

“The body is constructed by behaviour and it turns out that behaviour has a series of mechanisms that regulate it. Those mechanisms are the product of a sequence of interactions with the environment and therefore they are there because they are survival tools. This is the result of the fact that when I look at any animal, for example an ape, everything I see says world. The shape of the dolphin says ocean because the ocean forged that shape, it forged it through the behaviour that made them have the body of a dolphin, they are not arbitrary, there is a rationality which is survival. When I take them out of that world and put them in pools, all those mechanisms that evolved over millions of years spin in a vacuum and that spinning in a vacuum means that they only have bodies that can no longer exist and the mechanisms also begin to move in a vacuum. It’s not enough to protect the body, if I don’t have the behaviour, what I really have is a dying body that is taking its time to die.” ~ Héctor Ferrari, Biology Professor

In the days following this presentation, the issue gained prominence in the media, and even 150 press and radio reports were made. Finally, Kshamenk and his fellow captives are on the lips of all Argentinians who support and seek their early rehabilitation. People are beginning to ask questions and inform themselves about the reality of the captive industry.

We have put this industry on the radar and vigil of an entire country, demanding and naming this bill, Ley Kshamenk as a new hope for his improved health and his transfer to a sanctuary after 30 years of confinement. In addition, the social pressure that was generated also had repercussions on the reality of the sea turtle Jorge, who after 30 years of confinement, was transferred to Aquarium Mar del Plata to be rehabilitated. Now the aquarium is under the scrutiny of all those who intend to exhibit it or keep it in captivity, morally obliging them to show and work towards its rehabilitation and subsequent release. 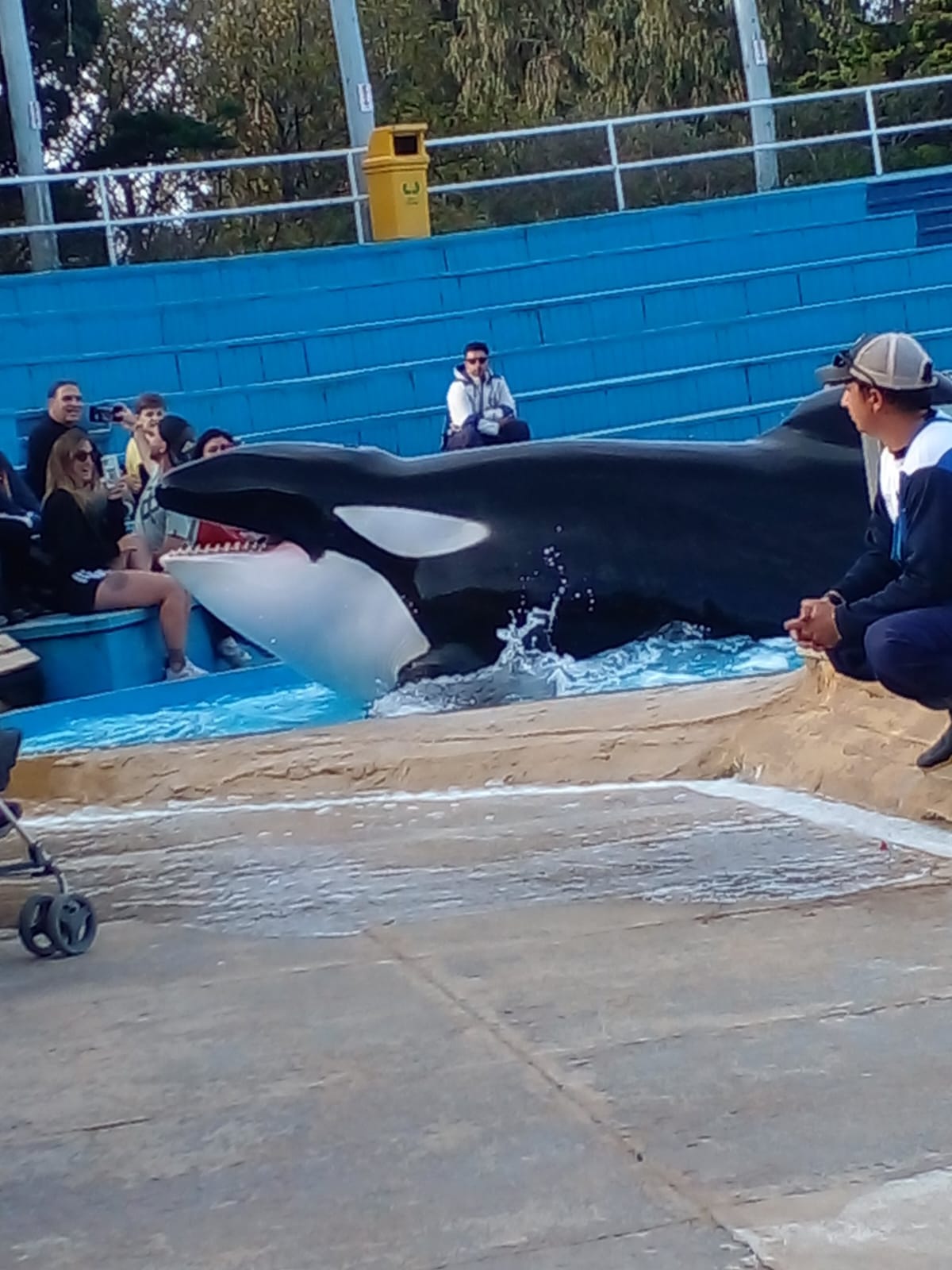 How You Can Help:

There has been no response other than postings on the Mundo Marino website (with no supporting evidence) saying that Kshamenk is in good health. This is why we would like to ask you to send an email to: [email protected] asking for a clear and transparent inspection and assessment of the health status of Kshamenk and his fellow captives, as there are no records or checks submitted in recent years by Argentina’s aquariums to the government.

Please also sign this petition and add your name to over 618,000 signatures, asking that Kshamenk’s Law is passed, in support of the captive dolphins and other whales in Argentina.

Kshamenk: The Forgotten Orca in Argentina