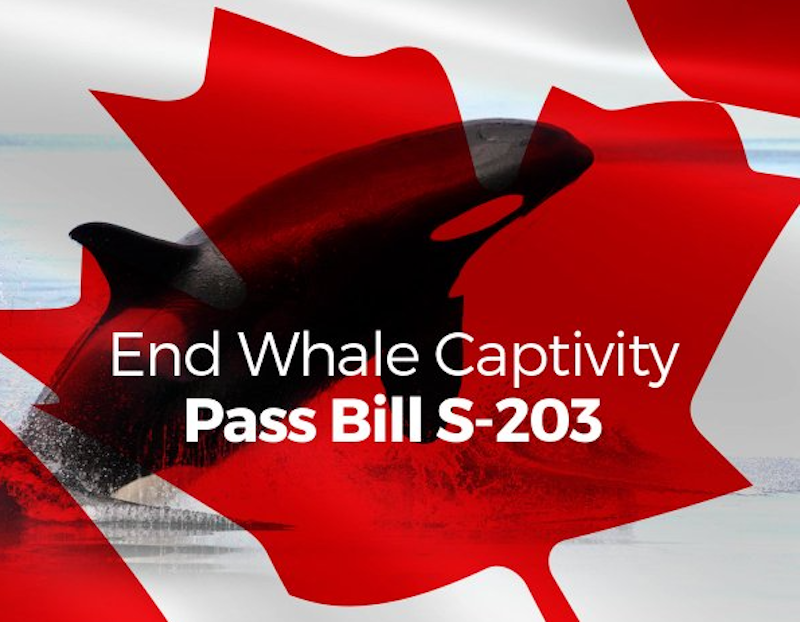 Updated 4/2/19: Bill S-203 has passed the Standing Committee on Fisheries and Oceans and will proceed to the House with no amendments for final vote. THANK YOU to everyone who took action on behalf of the dolphins languishing in tanks in Canada’s marine parks. If this bill becomes law, the keeping of whales, dolphins and porpoises (cetaceans) for entertainment and display will be banned. However, the bill will allow for rescues and scientific research.

Want to see Canada ban the captivity of dolphins and other whales? We do, too! That’s why we’re asking for your help. The following is an urgent request from Elizabeth May, Member of Parliament
Saanich-Gulf Islands and Leader of the Green Party of Canada.

On April 2, 2019, Bill S-203, An Act to End the Captivity of Whales and Dolphins, will be examined clause by clause in committee. If Canada is to have any chance at passing this legislation, the bill needs to get through committee without any amendments. If a single amendment is made, no matter how friendly or well-intentioned, it would have the effect of killing this bill.

Email the Liberal MPs on the Fisheries and Oceans Committee and tell them to pass Bill S-203 without a single amendment:

If you are in Canada, please call your MP and ask for their support in passing Bill S-203.

Whales, dolphins and porpoises are highly intelligent creatures. When held in captivity, they suffer from confinement isolation, health problems, reduced life spans, high infant mortality rates, sensory deprivation, and trauma from transfer to other parks and calf separation. Put simply, keeping whales and dolphins in captivity is a cruel practice that needs to be outlawed in Canada.

Most Canadians support ending this outdated practice; it is time that politicians took action. Bill S-203 is the solution to this problem, as long as it is passed before the election. If it is amended during this process, the bill will never become law.

Bill S-203 needs to be passed ASAP. Please email the committee members and share onto your social media. Every action you take makes a difference and helps push this bill towards the finish line.

Bill S-203: Ending the Captivity of Whales and Dolphins Act

UPDATED 1/11/21: Dolphin Project can confirm that the minke whale, after being trapped for over two weeks in Taiji’s fishing nets, has
read more