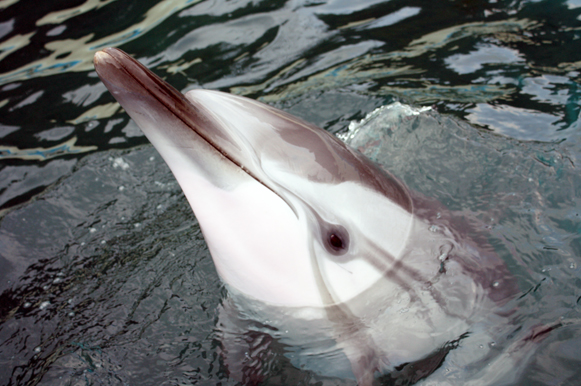 Today is my last day in Taiji.  It ended on a positive note because the boats did not go out due to bad weather.

But no matter how I try and look at the situation, my heart is breaking every hour that passes.  I am not ready to leave.  I feel like I just got here, and now I’m leaving.  All I can think about is the poor Risso’s dolphins that were captured last week from a slaughter – sadly I will probably never know what happens to them.  I watched the poor captive Risso’s for about three days after they were taken from the ocean and their family was butchered.  They just huddled together in the middle of the sea pen, just waiting to die, completely terrified.  Now they are gone out of sight, and who knows if they even survived at this point?

This week’s slaughter was also very traumatic, not just for me but for one lonely striped dolphin.  He was spared from ending up on the end of the butcher’s knife.  But now he is living a life in a tiny aquarium with three other dolphins right next to a tank of performing dolphins.  Loud speakers blaring every hour, being forced fed dead fish, and having humans walking around at all times.  This dolphin was constantly shaking and in distress from all these new elements.

I have to return home to my 5-year-old son and get back to being a full time single mommy.  Get up early everyday like I do here, and, instead of watching boats go out, I will be walking my son to class.  Instead of looking through binoculars for hours at a time for any sign of the boats, I will be folding laundry, cleaning house, or doing homework.

Even though I am returning home, my heart will be in Taiji.  Because I know there are so many unfortunate souls out here that will never return home.  They will never swim in the open ocean, and they will never see their families again.  Each and every dolphin came straight out of the bloody Cove and has a heart-breaking story behind those beautiful eyes.  Every dolphin out here has seen and felt pain that most people can’t even imagine.

The banger boats tied up in Taiji harbor.  Photo by Ruth Williams.

It’s going to feel wonderful to return home and feel my son’s little arms around my neck, and know how much he loves his momma.  Being a mother is one of my greatest accomplishments.  It has tested my heart and soul on every level, and he is the most important thing in the world to me.

These animals, just like thousands of other animals, are abused, mistreated, and murdered everyday at the hands of man.  Very few people take a stand and try and be the voice for the voiceless, but I will fight till the day I die.  I will return every year, and I will bear witness to these horrific events so these dolphins deaths and families are not taken in vain.  I hope to encourage my friends and family to join in and stand up for these innocent creatures.

Most of all I want my son to grow up and be a compassionate human being to all animals.  We as a society have put up these blinders on our children to “protect” them from seeing bad things.  But this does nothing good for them and the environment in the long run.

I hope my time here has encouraged others to stand up and get involved.  It doesn’t matter as to what your profession, education, religion, or ethnicity is, we are all humans, and we all share this planet.  We have an obligation to help these animals that have done nothing wrong to us.  We have to do it now before it’s to late.

Make your life have meaning so when  you leave this planet you know you made a difference, and your family can be proud.

Cheers! Thanks for all the support!