Has SeaWorld Sunk To A New Low? 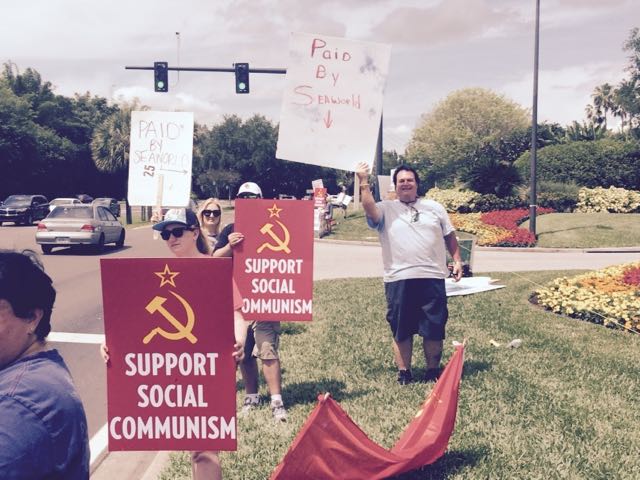 Dolphin Project team members are in Orlando today supporting the SeaWorld protest and the Blackfish Racing team as they compete in a local triathlon.

This is just one of the protests being held outside of SeaWorld parks. What’s different about today is that a mysterious group of “Communists” joined the ranks. When Dolphin Project spoke with one of them, the unnamed Communist admitted to “just doing this as a job to make so extra money.” When we asked him to actually name a communist, he “couldn’t.”

We also noted that the pre-made sign he was holding was manufactured in Texas. When we suggested that this might, ” not look good to some,” should he try to get a job or decide to run for office in 10 years, he began to hide. It doesn’t take a large dose of imagination to fathom who is behind this “Communist” campaign, although it is sickening to believe that an American company could act so “Un-American.”

We’ve seen this type of effort in action before — in 2012, during a public hearing held by NOAA over Georgia Aquarium’s request to import 18 wild-caught belugas from Russia. Unemployed people were used as paid line-sitters at NOAA Headquarters in Maryland. Brian Barnes, of the Dolphin Project, said he actually spoke to several of the line holders at the meeting. “GA Aquarium paid temps $22/hr to stand in line from 5 a.m. in attempt to fill avail seats & block us from speaking,” Barnes tweeted.

Paid line-standers are not uncommon and can be arranged through various temp agencies. The Dolphin Project is aware of at least one pro-captivity insider who oversees such agencies.

In the end their efforts were fruitless, it was team Dolphin who won the day. The “Communists” were outnumbered 20-1. America was founded by the voice of the people. And the people have spoken. We cannot go backwards and “un-know” the truth. Captivity kills, and the days of the performing orca and other dolphins — for our pleasure, is over. You can rest assured that these protests and our days of action are just getting started. Dirty tactics to discredit our efforts will only backfire. The Dolphin Project is about passion, belief and the truth, not profit and greed. Next week, the Dolphin Project travels to Washington D.C. to meet with the Obama Administration and to deliver more than 1M signatures from hundreds of countries. There is still time to sign the petition and join us in our Nation’s Capitol.